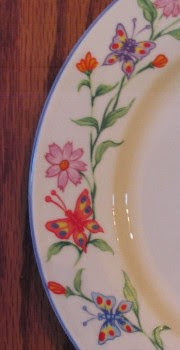 After all the research I did when I first got my countermarche loom, I decided that I wanted to take another look at my jack loom to see how well I could apply some of the things I learned. To do that, I needed to warp it again.

The project I decided on for this warp is a set of eight placemats. I wanted to match the motif pictured on the left. Happily I have all the colors in my stash: red, orange, yellow, green, light blue, medium blue, lavender, and pink. I also have plenty of natural cotton, all of these in 8/2.

After doing my preliminary calculations, I measured a six yard warp and began to warp the loom, back to front.

One of the first ideas I was able to apply, was a way to support the apron rod as I loaded the raddle. Prior to this, it was quite a balancing act; one at which I was usually pretty unsuccessful.

I used two apron rods from my 59 inch wide Glimakra, running them from the front to back beams on my Schacht Mighty Wolf. Onto these, I balanced the Schacht apron rod, with the warp on it, ready to load into the raddle. 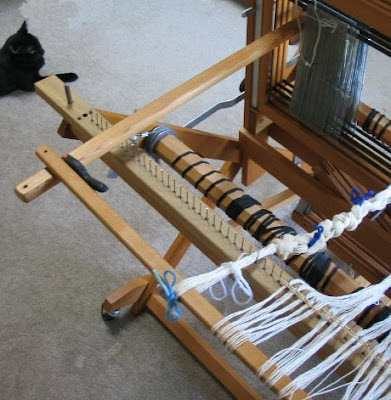 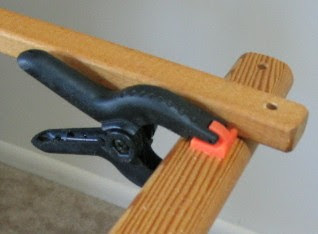 To keep the apron rod from sliding around, I used the same handy dandy little clamps that I found for 68 cents at Advanced Auto Parts last spring.

Although not pictured above, I finally figured out to use elastic pony tail holders to secure the raddle groups instead of rubber bands. My rubber bands are pretty old and tended to break easily.

So far so good.

I LOVE this idea! It's genius! I just need to find the right lengths of wood which I am sure I will given the supplies in my basement! And I will be warping a new project very soon. Thank you for this idea!

It's always exciting when we figure out a solution to a problem like that. Well done!

Excellent! Also good are long lengths of snap tape that you snap around the front beam, through the castle and onto the back beam. Then you slide the warp sticks in-between the snaps.

Your dishes are so colorful I can't wait to see the placemats you have planned for them. Great job on figuring out all the technical aspects to your new loom.

I love working with cotton - can't wait to see what you come up with! I've always just let the rod dangle, but this looks like a great idea!

I'm looking forward to what your jack loom experience will be, following the wonderful weaving from your countermarche, since I'll always be limited to a jack loom.

I'm so glad you kept that loom. Even if you don't use it very much, it will be very handy to have. Now I'm curious to see 1) how you like weaving on it versus the CM; and 2) how you think the resulting product compares.

Pure genius!
What is the Wolf like to weave on? The OH quite fancies a jack loom, and that brand is in the running for him.
TTFN

Thanks for sharing. Looks some nice looms you have.

I can't wait to see what you have planned because those dishes look beautiful!

I just wonder if the "Cat Squad" is helping you this time, Leigh? lol

Thanks for stopping by my "place"...I will try to get some fiber/sheepy posts going soon. You are still my No. 1 Inspiration!