Several weeks ago, I mentioned that I was going to warp my jack loom again. I wanted to see if I could apply some of what I've been learning about looms.

When a weaver warps a loom, the goal is for the entire warp to be evenly tensioned across it's whole width. However, one of the problems with jack looms and warp tension, has to do with the way this type of loom makes the shed (opens the warp so that the shuttle can pass through). The jack loom is considered a rising shed loom, because to make a shed, one or more shafts lift the warp ends threaded through them. During weaving, that upward pulling on the warp increases the tension on those lifted warp ends. This means that the warp in the shafts which remain in the down position are temporarily at a lower tension. This can create problems for a weaver, including skipped warp ends.

To compensate for this, the warp on a resting jack loom should take a downward curving dip. I wasn't able to determine this by just looking at it, so I set up a diagnostic string, as described by Peggy Osterkamp in Warping Your Loom & Tying On New Warps. You can see mine below; it's red and weighted at the front and back of the loom with s-hooks. 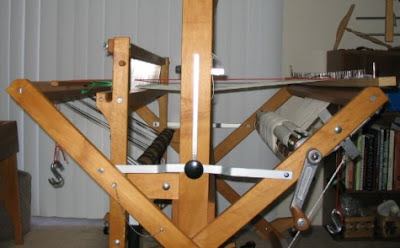 As you can see, my warp does indeed dip below this string. 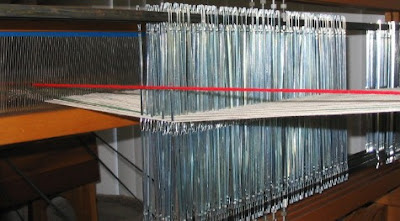 Then I wondered if my raddle had something to do with it, so I removed it and took another look...... 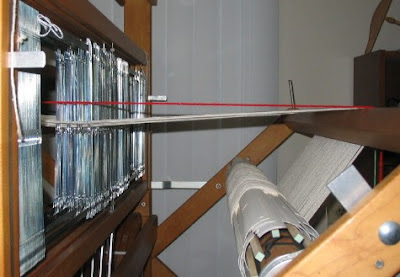 Even without the raddle the warp dips down below the diagnostic string.

The purpose of the dip is to help compensate for the upward lifting of the warp as the shed is made. Both top and bottom of the shed should be the same distance from the diagnostic string, resolving the difference in tension between the two.

My conclusion here? That Schacht did a good job in designing their looms!

Glimakra has an excellent article on jack looms and their adjustments. To read it, click here.

Thanks for the Glimakra link- very informative.

Wow! I never knew that about the jack looms, but watching their action it makes sense. I feel smarter now, especially after the Glimakra link :)

Thanks for the details. I've been told that my looms aren't good for rugs because of that dip, but I didn't realize what causes it or that it's a matter of design. I was put out initially but have become resigned to the non-rug loom. Reading this has put me in a much better frame of mind. Just need some time to go with it~

Thank you for the info! I enjoy your detective work. I also have a Schacht and think they are very well made.

My biggest problem right now is that I have the large-eyed metal heddles and I am thinking about changing over to the Texsolv because I have noticed some abrading going with the threads when I try to weave a dense warp.

I've noticed that before when I've used a floating selvedge, but didn't know it was a good thing!