There were a lot of really good guesses to my "guess the mystery fiber" question. Nobody got it, but I have to confess that I wouldn't have either. The source of the fiber is .... 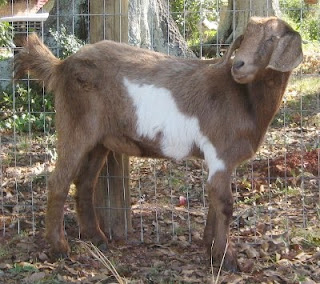 This is Baby, one of my goats. She is a Boer/Nubian cross. Boers are raised as meat goats, while Nubians are dairy. Spinners know that goat fiber comes from angoras, pygoras (angora/pygmy cross), or cashmere goats. But a goat like Baby???

Here's what I discovered about Baby.

Earlier this month she started growing a down coat. Neither of my pure blooded Nubians are growing one, so I'm guessing this is the Boer genes in her. This was the mystery fiber, which I hand plucked, just a little bit because I was so curious about it. She didn't have it when I first got her last May, so I'm guessing she'll shed it sometime in the spring. I will have to try to comb it out then and spin it. I'm very curious about what kind of yarn it will make!

Can you identify this mystery fiber? 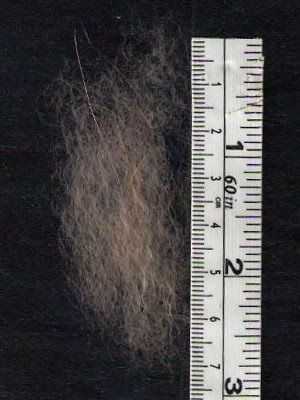 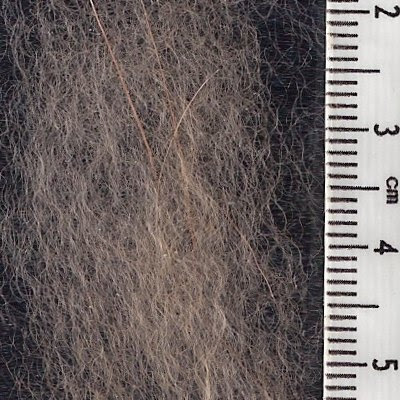 HINT: It's not from any breed of sheep.

Give up? The answer is here.

Can you believe it? I've actually finished something. Is anyone going to faint from the shear amazement of it all? 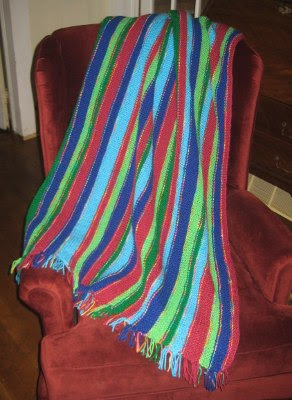 This is a knitted afghan for the Linus Project, a failed stash reduction attempt, but a nice way to keep my finger in the creative pie. I started it last March, set it aside during the hot summer months, and was motivated to get it done before our October Guild meeting. Project Linus is my Guild's community service project, and is dear to the heart of several members.

It is knit in garter stitch, from side to side, changing colors rather randomly. This enabled me to just leave the ends dangling at the ends of the rows, and later come back and use them as part of the fringe. 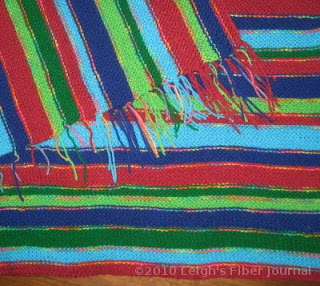 I later found out that Project Linus really doesn't care for fringe as a finished edge, so I cut the fringes really short, in hopes it would be okay. If I'd had to otherwise finish the edge, it still wouldn't be done!

Hopefully things will settle down around here this winter and I'll have more time for knitting and weaving. Thanks to everyone who visits in spite of my sorry blog content. It's part of what keeps me going.

I've Actually Finished Something photos and text are © 14 October 2010 by Leigh at Leigh's Fiber Journal.
Posted by Leigh at 7:02 AM 7 comments:

Email ThisBlogThis!Share to TwitterShare to FacebookShare to Pinterest
Labels: knitting

The official opening of the Blue Ridge Fiber Show was last Tuesday. I was on hand, with my camera, and wanted to share a few shots with you. 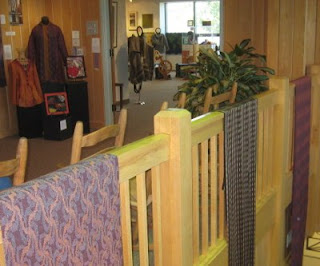 The show is being held in the Gallery of the Educational Center at the North Carolina Arboretum. 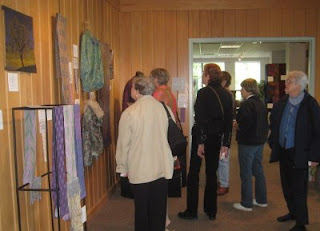 There was a really good turn out for this event. 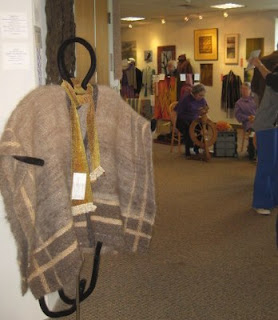 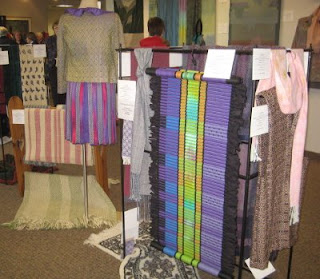 With about 170 entries, I wasn't able to get photos of it all, nor take very good notes about the shots I did get. 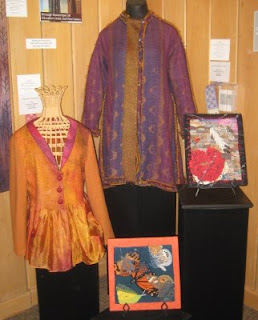 Photos of the individual pieces as well as the prize winners, will be posted on the BRFS website in the near future. 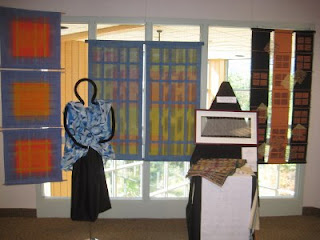 The pieces were fantastic, as you can see. The show was hung by a member of the Arboretum staff and Western North Carolina Fibers/Handweavers Guild members. 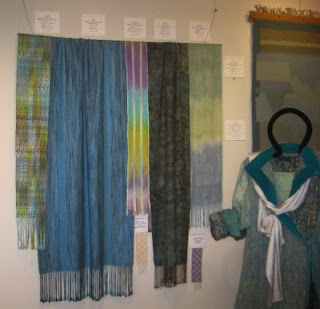 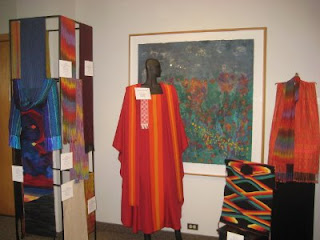 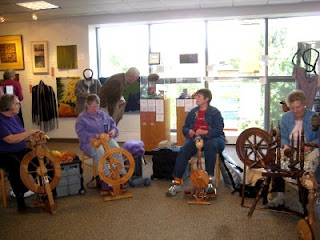 The educational component of the show features spinning by one of the Guild's study groups, The Blue Ridge Spinners. 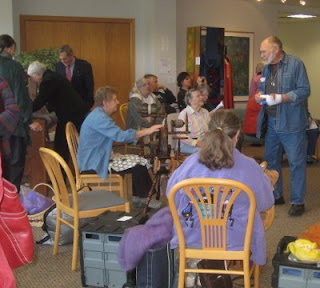 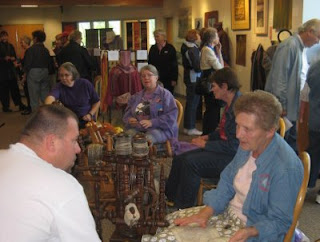 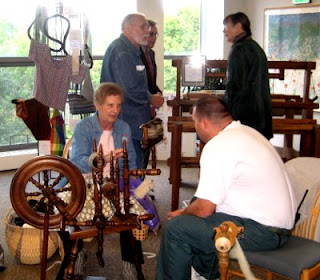 The other thing being featured, is weaving demonstrations on an old barn loom. 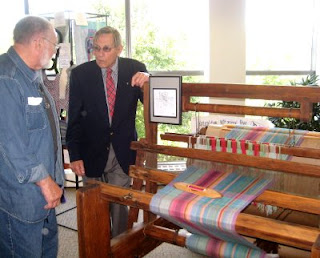 This loom has been fully repaired and restored by the gentleman on the right, weaver and WNCF/HG member Mikkel Hansen. 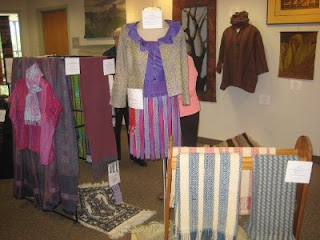 A few more shots of the entries. 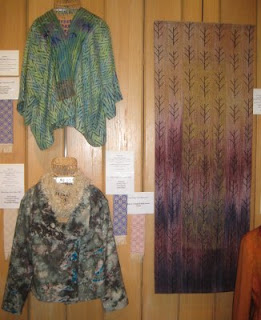 Some of the prize winners. I wasn't able to get individual shots of these, unfortunately. 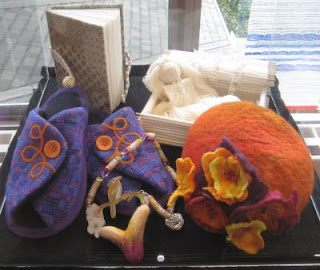 I did get photos of entries by fellow bloggers though. The ones I knew about at least! The book in the back left of this display is by Alice Schlein. 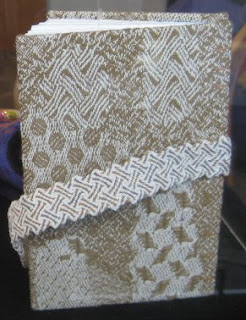 This is the back of the book (best shot I could get). It's actually a collaborative piece between Alice and Barbara Walker combining Jacquard weaving with ply-split braiding and book binding. It won Honorable Mention in one of the professional categories. 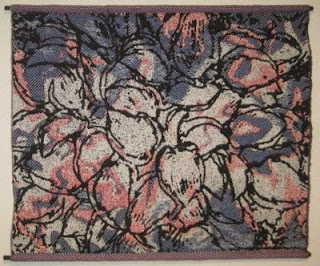 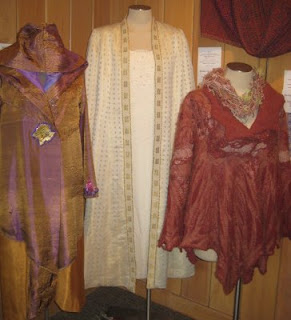 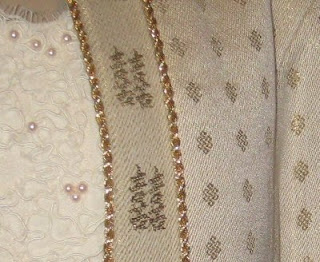 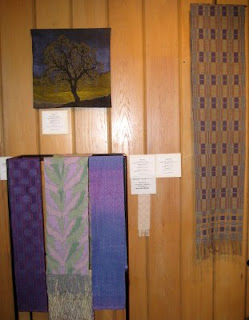 Blogger Sandra Rude entered two Jacquard pieces. The first is shown above and as an individual shot below. 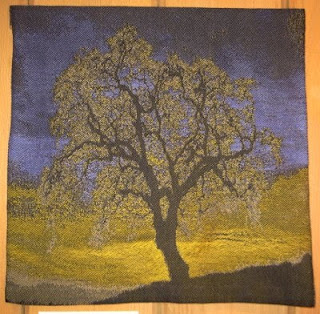 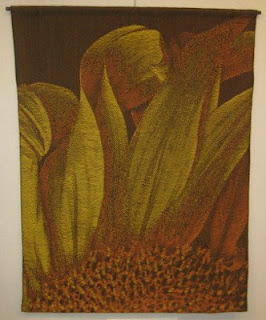 There was also an opening reception, for which my photos didn't turn out as well as I'd hoped. 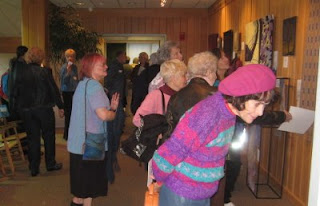 The show runs through the end of November.  If you are in the western Carolina or eastern Tennessee area, plan to stop by!