Although I've mostly been concentrating on the alpaca projects lately, I haven't given up on my Christmas afghans, and am in fact still contemplating how to incorporate the zig zag twill with the commercial space dyed yarns.

My first afghan, used the space dyed yarn as weft. I was semi-pleased with the results. There are possibilities there, but I was more interested in exploring space dyed yarns as warp. My first experiment with this was the summer & winter place mats.

When I warped my Mighty Wolf loom for those place mats, I cut and measured each warp end individually, trying to start at the same place in the yarn's color sequence. That was not only very time consuming, but I ended up wasting a lot of yarn. Not to mention that I wasn't really satisfied with the results. So I decided to try something different for this next afghan.

I actually had two things to consider. First was space dyed effect, but also I wanted to figure out how to center my twill zig zags within the color stripes. From that first afghan, I realized that this wasn't as easy as I thought I'd be.

One option for centered zig zags was to widen the warp color stripes, which I did here. I had to spread the stripes out however, because the very nature of twill lends itself to the overlapped effect that I was trying to avoid. My second option was to treadle narrower zig zags, which is what I planned to do this time.

First though, I had to figure out what I can do with the space dyed stripes. Since cutting the individual warp ends by color was a drag, this time I decided to get eight skeins and see if I could match them all up to start the color sequence at the same place. Then I could start measuring the warp from there. I used eight skeins, because my threading sequence is a straight twill using shafts one through eight.

I don't have a warping paddle, but I figured I could measure the warp from all eight skeins together without one. 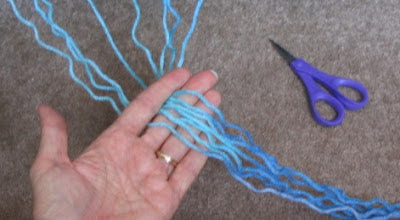 Once I matched up the color sequence for all of them, I started to measure the warp on my warping board. However, I discovered that the dyeing is inconsistent amongst the various skeins, so that the colors get out of sync every several yards. I compensated for this by making my bouts very small. Still, there are some odd color threads here and there.

The next thing I had to figure out was which treadles to use in order to keep the zig zags within each color stripe. After a little experimenting I discovered that in order to keep the zig zags within the color stripes (which are eight warp ends wide) I needed to treadle it 4, 5, 6, 7, 8, 1, 8, 7, 6, 5, and repeat. If I were using my jack loom, I would simply change the tie up so that the treadling would start on the first treadle. But since this is a countermarche loom, it is easier to change the treadling sequence(!)

I found, however, that it was easy to keep treadling in the same direction instead of reversing where I needed too. After confusing myself several times and having to unweave a few mistakes, I finally thought to use rubber bands to mark the treadles I am not using.

Since I treadle bare footed, this made it easier to keep track of where I was.

So, here's how it is turning out. The weft is a solid blue. 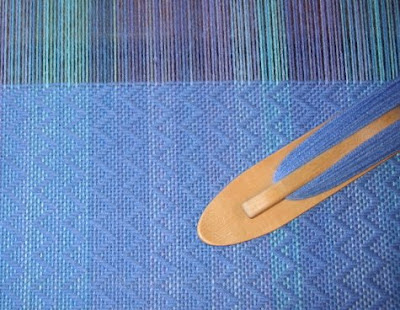 The zig zags themselves are a tad narrower than the ones on the previous afghans, but that's okay. However, I am still not satisfied with the space dyed effect, because of those maverick threads that didn't follow the color change sequence evenly. So I just won't point this out to the recipient, who will be none the wiser for it. I'm very curious to see how the underside is turning out, but I will have to weave a little more before I can find out.

I love the way these have worked out. Just gorgeous!

I think...no, I *know* that the things we see in our own work and get all worried about are rarely noticed by the recipient. And anyone who gets such a beautiful blanket under the tree will be so overwhelmed that they won't be able to track any wandering colors!

You are one tenacious weaver! The blues are lovely and the recipient will love the blanket.
Also enjoyed seeing the Kennedy shawl. I'm amazed at how fine the weaving appears for something woven on the tri-loom.

I am surprised at the shuttle you are using. Is that to get more yarn in there at one time? Lovely color.

It's beautiful Leigh! I can't imagine that the lucky recipient will have the faintest idea that it didn't turn out exactly the way you planned.

So far, I think that this is my favorite of the afghans. Probably this has to do with the fact that I love these colors.

Laritza, this shuttle is wonderful for medium to heavy yarns. I'm able to get 12 inches worth of weaving from one filling of it, compared to the three inches I got out of a 6 inch bobbin and boat shuttle!

WOW!!!!! You've out done yourself.
The colors are so soft and flowing.
Thanks for sharing.

Now you see why, if you want it to be "perfect" you have to do one warp end at a time. I did this once. Only once.
It would take much less effort, and be more rewarding, to get undyed yarn, make a warp, and paint it yourself. You can, I believe, even buy dyes with all the additives in them. Tempting.............?????
Your trick of signing on to blogger before respond on other blogger accounts worked like a charm, by the way.

Holy cow Leigh. You come up with answers I didn't even know were questions to. The good news is that you make it clear that I will never run of stuff to learn!

I don't think the giftee will complain about such a beautiful ghan, heck if they do rip it out of their hands and I'll send you my addy hehe. Na it's really gorgeous love the colors and the stripe variation, just beautiful, I'm sure they'll be more than happy with it.

Your results are beautiful! Nice work.

For future reference, the plastic paint stirring sticks that you find in the paint dept. of most 'big box' stores will work very nicely as a substitute warping paddle.

Plastic paint sticks! I wouldn't have thought of that, thanks for the idea!

And Peg, yes, dying my own is definitely on my mine.

I have done this same sort of exercise with A rainbow cotton and noticed the same problem with the yarn being dyed in slightly different colour runs. The end result was in no way compromised by it. Instead, it was enhanced by it. I am sure that you will not be disappointed by the end result.
I love the idea of the elastics on the "do not use" treddles!