How to Make a Mini-Skein 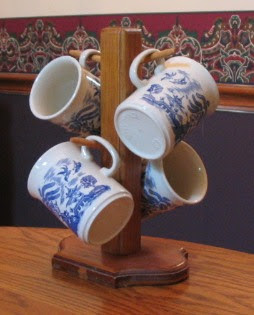 There have been times when I've wished for a way to make mini-skeins of yarn. Times such as when I used to do a lot of spinning demonstrations. Most people seem to have the idea that all wool is harsh and itchy. So I would hand them some Merino yarn and ask them to guess what it was. Mostly they thought it was cotton. What a surprise to be told it was indeed wool. I used to have a small poster to which I attached yarns from several different breeds. This gave me the opportunity to share a little about different types of wool and wool processing.

Another thing mini-skeins would come in handy for is yarn samples when experimenting with a new fleece. Some times I like to spin a variety of yarns from a fleece to help me decide how to best use it.

I know that mini niddy noddies are available, but somehow buying one just isn't a priority. When the Online Guild began discussing how to make small skeins of yarn, I read the messages with great interest. The cleverest idea came from Amanda Hannaford (who has a lot of fantastic spinning information on her website. Click on "links" and scroll down.) Her idea was to use a mug tree. 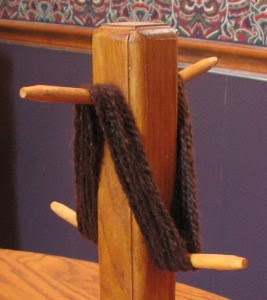 I found mine for $2 at a thrift shop. I bought it because I wanted to display some of my Blue Willow mugs, but it never occurred to me that the pegs for the mugs are in the same configuration as the arms on a niddy noddy.

I tried my first mini-skein with the leftover yarn from my stuffed alpaca doll. I tied one end to one of the mug arms and wound it on just like I would a niddy noddy. I tied it loosely with some thread before pulling it off the mug tree.

Being so small, it took a couple of tries to twist and secure it like a large skein. I think perhaps next time I would use a little less yarn. But the results? A very cute little mini-skein. Very handy for small samples. 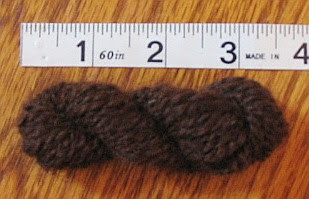 Yup, I'd say that's very clever. I actually bought a small one from Kromski and have used it exactly once. I'm fixed on knowing that I have a yard - don't know why.

Oh my, what memories you've stirred with this one! I'm not a spinner, so it isn't the subject that did it. The mention of blue willow mugs - that did it for me. When I was a girl, my favorite book was "Blue Willow" by Doris Gates, a story of girl named Janey who had a treasured blue willow plate. I've never forgotten that story, and it holds a very special place in my heart. Thanks for the memory!!!

And thanks for all the great info pertaining to fiber.

*staring at mug tree on counter*

Eureka! I never thought of that and I hate just butterflying the yarn with my fingers, it isn't very attractive.

Thanks for passing along the great advice :)

Very clever idea! I happen to have a mini niddy-noddy from Woodchuck that I will continue to use for my samples and because it is so portable (lives in my spinning basket). I do wonder how easy it was to remove the skein from the mug tree; with a niddy-noddy I can twist it to reduce the tension and the skein slips right off. Does one of the mug tree pegs come out or is it just a matter of maintaining a relaxed tension when winding on?

As soon as I read the title of the post and saw that top photo I wanted to slap myself on the head. Duh! Not that I have one, but how clever. Now, was it more awkward to wrap than with a standard niddy noddy? It seems like the stem might make it a bit fiddly.

that's using the ole noodle, Leigh! Even though I eventually did buy a mini-noddy, I'm all for using what's around and am a fierce believer in items that can multi-task!

I just use a small portion of my warping board (3 or 4 pegs) to make mini-skeins for my dyeing experiments. But if I had the mug tree I'd use it as it is much smaller and easier to put where you want it.

Kim and Kristi, I think using the mug tree was definitely more awkward than a niddy noddy. I had to pretty much rely on the elasticity of the yarn (not much with alpaca) to pull the skein off. I'll still keep a mini niddy noddy on my "someday" list, as it would obviously be more portable. Peg, I like your idea of using a warping board too. I'll have to give that a try as well.

I thought of buying one too - I am always one to try tips like this. but all the cheaper ones had just dreadful mugs on them:)) so I decided to just take a piece of timber from the shed, sanded it and drilled two holes into it, one into the top, the other into the bottom - but crosswise to each other. stuck two pegs into it, all done. the pegs should sit fairly tight in their holes or they shift at the beginning! taking the skein off is easy, just pull one of the pegs out.
not only low cost - but I avoided having dreadfully ugly mugs around too:))

Bettina, what a great idea! I may have to get DH onto one of these. (He's the wood person in the family.)

I just wrap around a book or clipboard when I need to make a mini-skein.

I do the same as Sue. But I really like the idea that Bettina had!

That is such a clever idea!

Thanks for stopping by my blog.
I might write the "perfect" sock pattern!
I went to the link you have and for the first time ever I was able to SEE someone spin cotton! No wonder I could not get it right! I was pinching too close to the triangle. Gotta give that one a try!

Great idea! Being able to use a single item in multiple ways is a nice bonus when space is tight!