The next step after winding the warp on, was the threading.

For some reason, I found threading the heddles on the Glimakra so much easier and faster than threading them on my Schacht Mighty Wolf.

As you can see below, 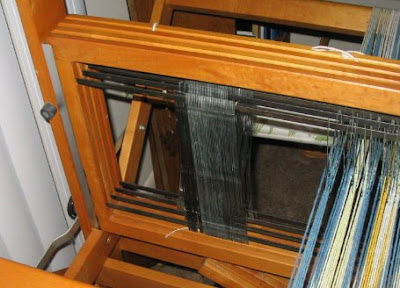 the shafts on the Mighty Wolf are wooden frames which move up and down in steel tracks, which also hold them in place. The flat steel heddles reside on two metal bars within the shaft frame. For some reason, I always had difficulty keeping track of which heddle was on which shaft. I tried all sorts of tricks to keep this straight in my mind, but in the end, careful checking and rechecking was always the best answer. Because of this, I was more than a little worried that the task would be more difficult with 8 shafts. 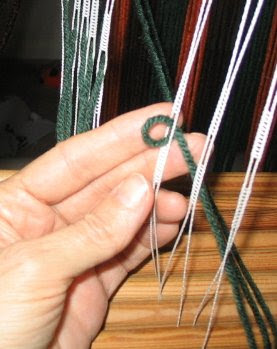 However, with the Glimakra, I found keeping track of the shafts much, much easier. Perhaps it was because they simply hang freely from overhead and can be moved easily. I could use one hand to keep track of which shaft I was on, and the other to separate out heddles for threading. Granted, the heddles do not slide around as easily as on the Mighty Wolf, but that was only a minor adjustment on my part.

The other thing I found easier, was that because the heddles are flexible, the yarn could be easily poked through the heddle eye without a threading hook. This saved me lots of time because with a threading hook, I was forever dropping the darn thing and having to hunt to see if it had fallen into the jacks or was hiding under the treadles.

Of course, I did choose an easy threading pattern; a simple straight twill. I simply threaded the shafts in order, 1 through 8, repeat.

Peg (who BTW, recently started an excellent new weaving blog, click on her name to check it out) was curious about threading from the lease sticks in the raddle cross. For one who is usually quite camera happy, I didn't take any pix of this!!

You may recall from my last post, that this is a one cross b2f method, using only a raddle cross. After the warp is wound onto the warp beam, the cross remains held by the lease sticks, from which the heddles are threaded. My set up looked like this. All I had to do was to take the shafts off of the countermarche and I was ready to thread.

I first tried leaving the raddle in and simply picked out the raddle groups to thread in order. I found it easier however, to remove the raddle. All the threads are in order on the lease sticks, so by moving them close to the shafts, I could easily pick out the next warp end to be threaded. As I mentioned above, all this went quite quickly and was actually fun!

After the heddles were threaded, I put breast and knee beams back in place, and selected a reed. My loom came with 5, 60 inch reeds and also this very clever home crafted reed holder. For sleying, I set the reed up as it was demonstrated in the Glimakra set-up video........ 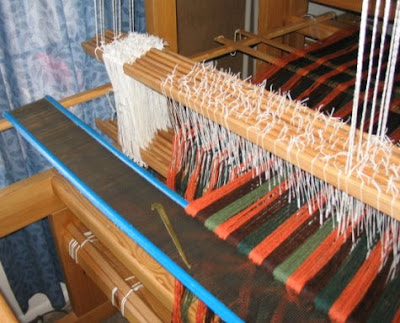 Sleying the reed was also quick and easy. Warp ends were simply pulled down through the dents with the hook. When I was done, the hanging beater was put back on and the reed inserted.

The last step was tying onto the front apron rod. Usually I like to lash on, but this warp is so wide that I decided to tie it on the way I first learned (also demonstrated on the set-up video.) One tip I learned from the video was not to just tighten the knots, but to actually pull on the warp. 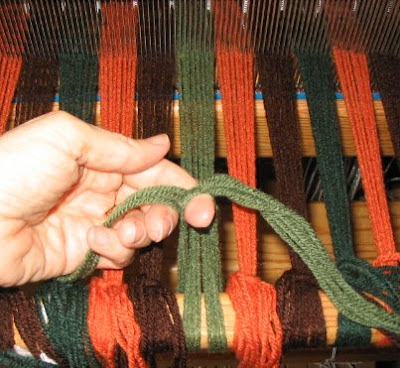 The idea behind this is that simply tightening the knots only serves to stretch the warp, not actually tension it. At any rate, I found this method much easier than I remembered. This washable acrylic knitting yarn is quite stretchy, so I had to pull it up several times. Tension was tested at the cross. Once it felt even, the square knots were completed.

Leigh, it's looking so good. How exciting this must be for you! Can't wait to see the blanket coming off this lovely loom!

Boy, I wish I could watch you do that. BtoF is so intimidating to me. Even though I do FtoB, I don't use a hook when threading the heddles either. It's just much faster with my fingers. And for the first time, I'm threading from left to right and it seems enormously easier. Can't wait for the next post!!!

I am enjoying and looking forward to every installment on your new loom, setting up, warping and lastely weaving. Thanks for sharing.
Barb

Tying up a countermarche loom really isn't that hard. You just have to keep telling yourself that each shaft has to go either up or down. I just remind myself of that everytime I'm tying up (and cursing while I spend 30-40 minutes under the loom tying up).

I really do think it makes a big difference in how hard it is to treadle to use a countermarche. Good luck and I hope the Glimakra is faster than my Louet to tie up

Holy cow, you practically have to have a PHd to set that thing up, don't you. Now I see why Rascal & Catzee are still sleeping - you have them locked away so they can't get to the loom! Ha Ha. - Happy 4th of July! T.

I've always enjoyed threading and sleighing the reed - maybe that's because I know exactly what I need to do. Some of the other steps have always left me less sure of myself. I learned on a table loom and - back to front, one cross. I never thought to test the tenstion at the cross - do you know the reason for that? I've always just patted the warp between the heddles and the front beam to see if it feels evenly tensioned, but that's one of those things no one ever told me exactly what to do. Thank goodness for weaving blogs! And thanks for pointing me towards a new one - I've added Peg's to my list.

I posted yesterday, I thought successfully..........grrrr
I would really suggest you work at using tools for the threading. If you ever work with fine threads, you will really have to. Also, with the hook, you can get at least 4 warp threads on the hook before you pull them all through. Much faster, though it does take a while to learn............(sob)

The cross is a thread by thread cross, but being at the other end of the warp from where I'm used to putting it, I called it a raddle cross because it isn't what Peggy Osterkamp called the threading cross. That only left a raddle cross and since the raddle was loaded from there that's what I called it!

The only problem I had threading the heddles was an occasional split warp end. I'm using a 4-ply knitting worsted. I'm a real klutz with tools, though I'm sure I'll use a threading hook sometime again soon.

For heddles, I find a crochet hook much easier to handle than a normal threading hook.

I'm very interested to see the Glimakra technique for sleying the read - it's such a nuisance having the reed hanging (i.e. swinging) when trying to sley. I shall have to give this a try.

I'm so looking forward to seeing if you get a good shed! I never did get it right in 20 years!