Warping the Glimakra: The 3 Duhs 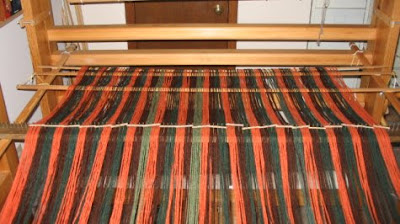 This is not a tremendously big deal, but I should know better than to try too many new things at once. The new loom should have been enough. I thought I was doing good to refrain from trying a fancy 8 shaft pattern, but I did allow myself to succumb to weaving something I'd never woven before, a blanket. 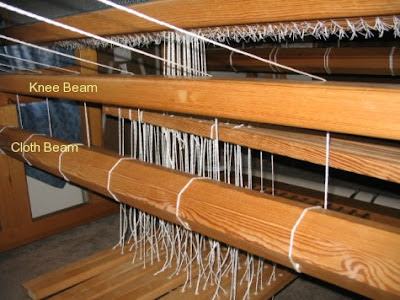 In this photo, it is wound on correctly. At first however, I had the apron cords going around the other way.

To the mechanically minded this probably would not have been a big deal, but to me it was a major panic. I had everything threaded and tied up and ready to weave. I thought I'd have to re-do it all! Fortunately, my DH looked calmly at the situation and started winding the beam until it unrolled the apron cords. He kept on winding and much to my amazement, it wound itself the correct way. If he hadn't been around it probably would have been a bigger duh because I would have untied the whole thing to correct it. Not something I would have enjoyed especially because of Duh #1.

I think what threw me off was the knee beam. My other loom doesn't have one and I'd never had to deal with one before. I'm assuming it's there to keep the cloth out of the way so that one can get one's knees under the loom.

"Wrong" here is a little relative. It has nothing to do with overall results, but everything to do with which side of the cloth I was going to look at while I was weaving. And this has to do with how the pattern draft is written and which way the shed is formed on the loom: rising or sinking.

My introduction to this entire concept took place shortly after I started to weave in 2000. I decided to weave a table runner using a pattern from Marguerite Davison's A Handweaver's Pattern Book. I was puzzled after I began weaving. While it looked pretty on the loom, it didn't look like the picture of the pattern I'd chosen. To my surprise, after I finished and cut it off the loom, there was the pattern I wanted, on the bottom! I soon learned that this was because all the drafts in this book are notated for sinking shed looms. My jack loom had a rising shed. That meant that if I wanted to look at the pattern while I was weaving, I needed to tie up the treadles according to the blank spaces in the draft, not the X's. 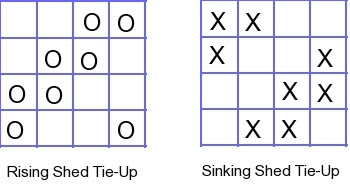 Usually tie-ups for rising shed looms such as jack looms, use O's to show the treadle tie-up. Sinking sheds such as counterbalance looms, use X's. The two drafts on the left will produce exactly the same woven pattern. While most modern weaving books show the rising shed tie-up, the older A Handweaver's Pattern Books (originally published in 1944 before jack looms came into popular use) uses X's.

But what about a countermarche loom, where part of the shed rises and the other part sinks? For my first treadle tie-up, I followed the instructions on the set-up video, which showed tying up the upper lamms first, and then tying up the bottom ones in the opposite pattern. However the video showed a simple plain weave, whereas I wanted a simple straight twill. What I didn't realize is that the short, upper lamms pull the shafts dow to sink the shed, while the long, lower lamms lift the shed because they are attached to the overhead jacks, which pull the shafts up. (Photos of this stuff on this post.)

Countermarche looms are usually considered rising shed looms for the sake of tying up the treadles. They do differ from jack looms in that every shaft has to be tied, but they can use the same rising shed drafts.

So what exactly did I do "wrong'? I switched which set of lamms I tied to. I tied the upper (sinking) lamms to the O's in the draft which were supposed to be rising. My pattern was upside down. I probably could have let this go and simply pressed on with my weaving. I was having problems with my shed however (more on that next time), so I decided to re-tie the entire treadle tie-up. I've often said that I learn more from my mistakes than from getting it right the first time. Believe me when I say that I won't do that again.

So there you have it. Looking on the bright side I have to say that I'm learning a lot.

Holy cow, that thing looks WAAAYYY to complicated for my pea brain -

I KNEW you'd love that color wheel - isn't it just fabulous - and how about that knitted sampler blanket - did you "biggify" the picture to see all the stitches - almost as good as your sweater :-)

I'm happy for a new week - maybe this one will go a little better than last - can't help to be as the neighbors have stopped trying to blow up the place! T.

Let me just say that I can totally relate to your "duhs"!
I did know about Davidson's book and switching around the pattern but I can still get all mixed up!
Read about a knee beam but never seen one!
Onward with the learning!

There is always a BIG learning curve when you begin working with countermarche looms, so know that you are not alone. I still have to grab a lamm and haul on it when I start to help someone tie up to see if it raises or lowers the harness. And the knee beam is indeed to keep the cloth away from your knees while you are weaving. Students have also forgotten to put the knee beam back before they started weaving. If this ever happen to you, you can loosen the tension on the front beam and unroll it a bit until you can slip the knee beam back on.

Tina, yes I definitely did biggify your pix. I just loved looking at them.

Jackie, Peggy Osterkamp has a way to remember:

All I have to do is remember that!

Been there done that for all three. Now you did miss a big and common one: winding on backwards on the back beam. Trust me it will be worth the effort. Once you start weaving and get the second warp on you will wonder how did you ever weave on something else :D I am biased, I love my Glimakra!

It is so very easy to yield to temptation and attempt more than we should............Even when we know what we should be doing........ As you said on my blog, knowing is not understanding.........
As for the backward winding on. That can happen on any kind of loom. Has not yet happened to me, but I'm sure it will. Every other mistake in the world seems to happen; why not that!
Glad you finally posted. Couldn't hold my breath much longer.......

Oh man, I really share this experience! But yes, each time does mean learning a lot. Like, I learned that to get Texsolv heddles to hang untwisted it is really useful to be a knitter, and understand how the same leg of the stitch/heddle has to be forward. Bue hey, I did realize that if you put on a warp that is the entire width of the loom, you don't have to worry about centering the warp on the reed. Anyway, I am still threading.... Enjoy the weaving part.

You're learning and lot and I'm learning with you. My learning curve is way far behind your's so hope I can keep this information in my head until I need to know it.

Looking forward to hearing about your problems with the shed - that was always my stumbling block - not the only one. Good luck.

Laritza, that's one "duh" I haven't managed yet (fingers crossed!) Peg, I'm aware that there's also a difference between what I ought to do and what I end up doing. But as Rob pointed out, It was super easy to get the thing centered *lol* We'll see about the shed however! And Sharon, the information will still be here later.