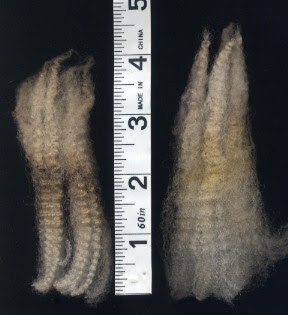 Time for a quick Shetland spinning update! This next fleece sample was pretty interesting. It was from a lamb named Aurora. Cathy told me it was a second shearing and she believed that the color had been mislabeled. It almost looked as though it could be fawn, but it turned out that it was just pretty dirty. ( And from reading Kathy L's blog, I do know that Shetland lambs love to play!)

The unwashed fleece (left) had quite a few bands of color to it, from reddish to yellow to dark brown. It's length averaged about 3 to 4 inches, with about 12 crimps per inch. It contained some second cuts and some vegetable matter (VM). 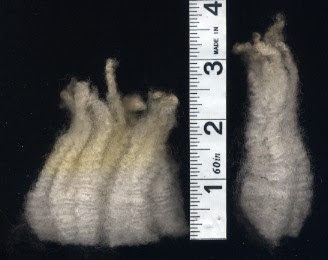 I gave it an extra washing soak in Dawn dish liquid and three rinses. The various pseudo fawn bands washed out to a lovely creamy white, but the yellow bands remained! You can still see them in the washed sample on the right (though in real life they are darker than in the scan.)

The yellow stains I had encountered before always washed out. These are called "yolk" and are actually lanolin. Since this stain didn't wash out, I wondered if it could be what is known as "canary" stain. So I turned to the stain chart on page 174 of In Sheep's Clothing. This could definitely be canary stain.

A little Internet research turned up lots of information, but I found this article to be the most helpful. I learned that this stain is actually caused by organisms which attack and discolor the fleece. How serious this is in evaluating the fleece for handspinning depends upon whom one talks too. Some seem to think it harmless since the organism is killed with soap and hot water anyway, while others would discard the entire fleece from such animals. Evidently it can be severe enough to weaken the fiber considerably, but in Aurora's sample, this wasn't the case. Since the stain didn't effect the integrity of the staples, I went ahead and processed my sample.

To blend in the stain, I drum carded the entire sample thoroughly. The batts were a wonderfully creamy color, almost like fresh butter, a very pale yellow-tinted white. My only problem was neps, which was a little frustrating. Of course, after I finished drumcarding the entire batch, I went back and looked at my fleece assessment. There I saw that I had highlighted a comment I had written - "! Tips weak, cut off before carding !"

Note to self - always remember to read notes to self.

The spinning however, was wonderfully smooth. The fiber was silky soft and lovely to handle. From my experience with Nikki's fleece, I was able to better compensate for the crimp and elasticity of the fiber. For Aurora's fleece, I ended up with a 2-ply of 16 wraps per inch, which was my target size. That was a relief. Interestingly, it's "shrinkage" differed from the first two samples (Nikki and Korny), as you may recall from this photo. Aurora's is the skein in the middle.

And so my Shetland yarn collection continues to grow. I try to spin, or at least process some fiber sometime during each day. It is a welcome break from the loom wrestling I've been doing lately. But, more on that next time................
Posted by Leigh at 12:01 PM

I'm all over the Shetland lately! Cathy sent me some as did another spinner so I've been carding, dyeing and spinning it quite a bit. Thus, I am glad to see more info out there on the fiber. I had no idea what the yellow coloring was...interesting!

I didn't know what the yellowing was either. I've got some fleece I need to work with but have never spun Shetland. Need to pick some up at NY Sheep and Wool this fall.

i love your Aurora yarn. I'm madly spinning for my project and am amused that your outcome is very close to what I'm coming up with. Too bad we live so far apart~

Again - great post on the Shetland samples. I had Susan put Aurora into roving for me and dyed half the roving. It's nice fleece but not as sweet as Nikki and Sass. We'll keep those 2 in mind for next year!

I had that canary stain only once so far, unknown breed, but it didn't suffer during spinning at all. I guess when you can't break the fibres before spinning, it should be ok for working with it. of course it influences results when you dye the yarn, but that can look very nice too! I am spinning silk/wool just now - and I am in spinning heaven:) there's something to be said for ready-bought tops too!

I'm soooo enjoying your Shetland posts! Sometime soon I'll have to pull out my own samples from Cathy.