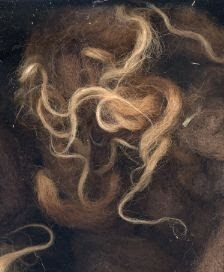 Monday was a play day. I spent it sorting and examining my Shetland fleece samples. With seven samples of fleece, I have excellent variety in terms of fleece type and color. They came from Nussbaums River Bend Farm in Farmington, NJ.

I had washed them over the weekend, in separate batches so as not to lose track of which was which. I used mesh bags and hot, hot, hot water in my kitchen sink. Each batch had two 20 minute soaks with Dawn dish liquid and then three long hot rinses. The 2nd rinse had a good glug of white vinegar. Wool and silk favor slightly acidic conditions. Soap and detergents are basic, and can damage protein fibers. The vinegar returns the fiber to a happier pH. I used the spin cycle on my washer to remove as much water as possible and allowed them to air dry on a towel in a cat proof room. 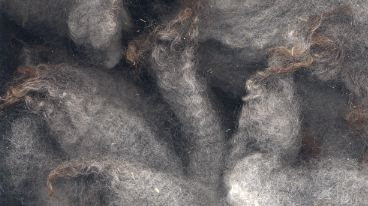 Shetland is an ancient Northern European short tailed breed, thought to have been brought to the Shetland Islands by the Vikings. Considered a primitive breed, Shetlands were originally dual coated. "Improvements" over the years developed a single coated variety. Both types can still be found, and each has it's own characteristics. I was fortunate that Cathy sent me some of each type! 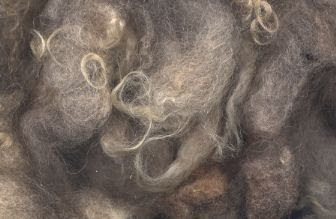 In the US, Shetland is considered a "recovering" breed according to the American Livestock Breeds Conservancy, which is good news. The breed is evidently a very popular choice for a spinners flock, as they are a small, hardy, sweet tempered sheep. I know they would be my choice if sheep were allowed to live in apartment buildings!

Shetlands come in eleven main colors and have 30 types of pattern markings. In trying to evaluate the fleece samples, I discovered that much depended upon the type of fleece it was. The North American Shetland Sheepbreeders Association (NASSA) recognizes three types of Shetland fleece. 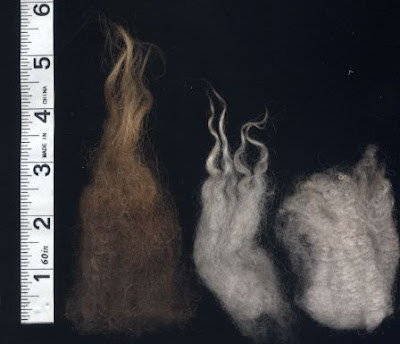 Left - the beaver or double coated fleece. These have the longest staples, with a length of 5 to 7 inches. The staples are distinctly shaped and it is easy to separate the two coats by grasping the tip firmly in one hand and gently combing out the undercoat at the butt of the staple. The undercoats are softest, but I didn't find the outer coats to be especially harsh, like the Navajo-Churro and Icelandic fleeces I've worked with. Crimp in these samples was the least well defined at about 6 per inch on average. The outer coats also showed the highest amount of luster.

Middle - is the long and wavy type. Mine measured 4 to 5 inches in length and are triangular in shape. These could not be separated into two coats. I'm not exactly sure where crimp becomes wave or vice versa, but in these samples it was about 6 to 7 per inch with wavy to curly tips. Staples are very open.

Right - Kindly, single coated fleece. The shortest at 3 to 4 inches. The crimpiest; I measured 12 per inch on the sample I had. The softest and densest.

My plan at the moment is to drum card each of them. There is an interesting color variety withing some of the samples, but I think I will ultimately want them well blended. I plan to spin them the same size as the yarn for my Rare Breed Sweater, from which I have quite a bit of leftover Shetland yarn and roving! I would like to use all the colors together in a Fair Isle vest or cardigan eventually. I'll report more on the individual processing as I go along.

In the meantime, comments, corrections, and suggestions are most welcome, especially from you Shetland folk!
Posted by Leigh at 12:25 AM

Oooh, I want a Shetland too, after reading about how sweet and affectionate they are...I spun a little Shetland a while back, I'll have to revisit it soon.

Ooo, thanks for the Shetland info. Cathy also kindly shared some with me, but I haven't started to play with it just yet. This post will be helpful!

Leigh, You're gonna love working with Shetland! You are spot-on about the Shetland outer coat being much softer than the Churro. I live in an area (AZ) where most of the sheep around me are Churro. Everyone thought me crazy to go with a breed of MY heritage (Viking/Celtic) UNTIL they saw and touched a Shetland! Everyone is amazed at the fleece and how personable the breed is. Enjoy and we'll see what we can do to win you over to "our side". ;)

Several years ago I had the fortunate opportunity to organize a Navajo-churro challenge for the online guild. I ordered 9 fleeces and was in absolute heaven working with them. At the time, I thought that if I was every able to own sheep, I would get Churros. But now, in working with the Shetland, I am in love all over again.

Thank you for that lovely tribute to my favorite hairy guys. They have such wonderful temperments that they pass the grandchildren test - certainly the llamas haven't. And their fiber, well, it's a good thing I love it because I get four new ones every shearing. I have purchased two to supplement my color choice, so I have six of the - how many colors did you say? Actually, they are second only to alpaca to range of natural colors. I am so glad you're enjoying those fleeces. You help validate my mania.

Cathy sent me over to see your Shetland posts as I have recently discovered this fiber and am helplessly falling in love with it!

What pretty fleeces you have there! Thanks for all the information.

Very interesting post on Shetland's, Leigh! Your rare breeds sweater looks wonderful! Is that your own design?

Yes, that sweater is actually my own design. It's taken a lot of work but it's been so worth it. Assuming, that is, that I finish the bands to my satisfaction! :o