My second summer & winter Fibonacci overlay experiment is off the loom. Like the first, I didn't match the colors of my warp stripes to the threading pattern.

For the colored stripes in the warp, I used a different Fibonacci sequence so that it overlaid the threading sequence. I made it easy on myself and used a sequence of three: 8 warp ends of white, 12 warp ends of dark green, and 20 warp ends of dark purple. My warp is 8/2 unmercerized cotton. 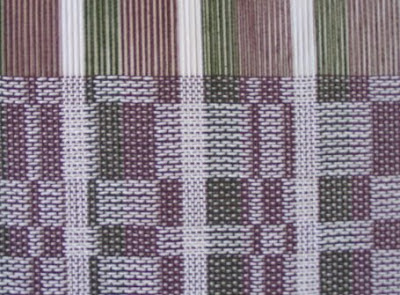 I put on enough warp for three dishtowels, and then used what was left to experiment a little. For each dishtowel, I used different colors in the tabby and pattern wefts, and different treadlings as well. 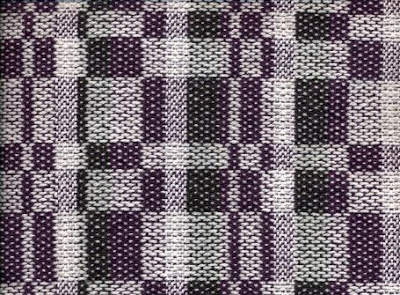 For the first on I used purple tabby weft (same as warp, an 8/2) and white pattern weft in 6/2 unmercerized cotton. I treadled with the same pattern as the warp color stripes: 8, 12, and 20. You can see these changes in the horizontal bands of the weaving above. 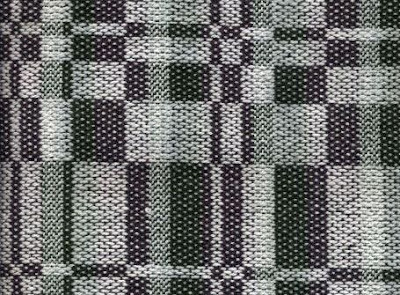 For the second dishtowel, I continued to use the 6/2 white cotton pattern weft, but switched the tabby weft to the 8/2 green cotton. I changed the treadling to be the same sequence as the threading blocks, using 4 pattern picks (each of first tabby and then pattern wefts), 8 pattern picks, 12 picks, 20 picks, and 32. 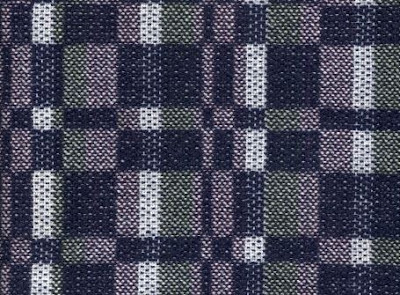 After that I had a little warp left and so tried another traditional summer & winter treadling. I used the 6/2 white for the pattern weft again, but this time used an 8/2 navy unmercerized cotton for the tabby weft. 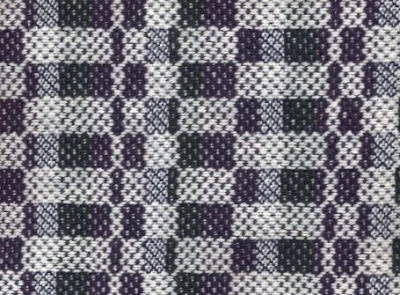 In some ways I think the navy was a better choice for the tabby weft as both the green and purple I used in the warp have blue as a common color element. It had a better visual influence on both the green and the purple, which tended to muddy one another a bit when used on top of each other.

One thing bugged me while I wove was the white warp stripes. I figured that I should have learned my lesson with that last batch of towels as white tends to be very pronounced against darker colors. As I wove, the white kept grabbing my attention and was a distraction. I kept mentally kicking myself for using it in the warp. But now that it's all off the loom and I'm looking at photos of the result, I realize it isn't so bad. Hmmm. Live and learn.

In reading all this over, I realize that one problem with reading about weaving is that it requires a lot of concentration to mentally visualize what's being described. It does for me anyway and I don't know about you, but I'm not always up to it! So if my descriptions are are confusing, just enjoy the pictures. :)

Related Posts:
Fibonacci Overlay 1
My Fascination with Fibonacci
Summer & Winter: Structure and Theory
Posted by Leigh at 12:37 AM

Hi Leigh! They are all lovely, but I'd agree with you that the navy weft seems 'crisper' overall. Very cool!

Leigh,
I can see that the white would be distracting while weaving but it looks so good in the finished fabric.

All of them are just beautiful! I wish I was a weaver...I have a small rigid heddle loom that I play with from time to time, but I never seem able to stick with it. Your Fibonacci overlay experiment is reviving the urges again, though! Just lovely...

Summer and Winter is chasing me, and I think I'm going to let it catch me! I have been reading these back posts of your blog and enjoying your summer and winter color experiments very much. They're beautiful! I took a book about summer and winter out of the library a year ago and said, "not for me." Now I think the problem was that the book was was in black and white!

Trapunto, so far summer & winter is my favorite weave. I'm still trying to explore more, but I like that one the best. It's a lot of fun and the color work is fascinating.