Adjusting the Loom With Texsolv

Before I could warp the loom, I wanted to make sure that everything was properly adjusted and that all parts were true and square. The loom had disassembled easily for moving, but I knew I'd need to do some fine tuning for my weaving to go smoothly. All adjustments are done with the Texsolv System. I had heard of Texsolv heddles before, but didn't know that there was more to it than that.

On the left is a scan comparing one of the Texsolv heddles to one of the flat steel heddles from my Schacht loom. I've read several discussions about these heddles on various email lists, though I confess that I didn't pay much attention as I didn't have them.

What I didn't realize is that Texsolv is an entire system of knotless, heat treated polyester cords that attach everything on the loom: the shafts to the jacks and lamms, apron sticks to the warp and cloth beams, and treadle tie-up.

The cords are actually more like a chain rather than a smooth cord; something like a series of linked button holes. These serve two functions. The first is that a loop can be make by pulling the cord through one of it's own chain holes. Very convenient for tying shaft sticks to the overhead jacks, for example. 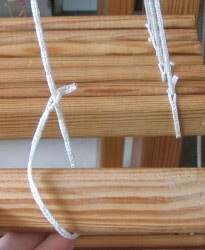 To attach the cords to other parts of the loom, such as the treadles, anchor pegs are used. The knob on the peg is pushed through one of the chain holes, and the legs on the peg are pushed into the appropriate hole as below. 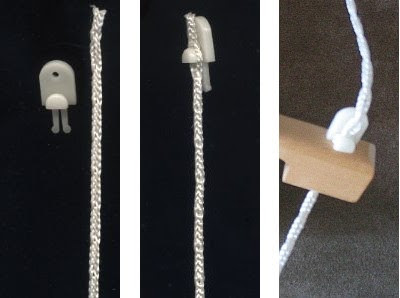 Many adjustments are made simply by trying the anchor peg in another chain hole. As long as I don't have to fumble around too much or drop too many anchor pegs, I should be able to handle this. Next I can actually start warping the loom.

For a little more information on the Texolv System, there is an excellent article here.

Next, winding on the warp.

One of the ladies brought a Texolv system loom to the Sharon Alderman weaving workshop I attended a few years ago. I was stunned at how quiet it was - no rattling heddles which seems like it would be kinda nice.

When I bought my Wolf I had a choice of heddles. I ended up getting, and loving, the inserted eye heddles that are very kind to yarn. I had a table loom with the Texolv heddles and remember that it kept the harnesses very light. I imagine that would be a bonus on a bigger loom.
I can hardly wait to see what you're going to weave first! :)

Wonderful thing, that loop cord! I don't know of a supplier in the states, but in Canada, we got ours from LeClerc.