Setting Up the New Loom

Thank you all, for your encouraging comments about my new loom. I think I'm finally getting over the shock of owning it. I am delighted to know that several of you already have this loom, so don't be surprised if I bombard you with questions!

Set up was pretty easy. Between the video and the booklet, we just took it step by step. Plus we had plenty of help. 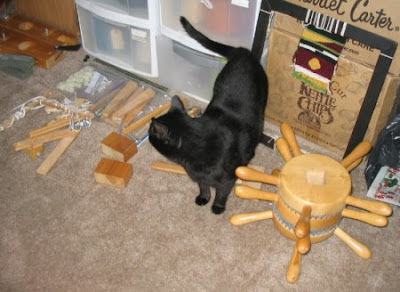 Rascal was in charge of hardware and small parts. 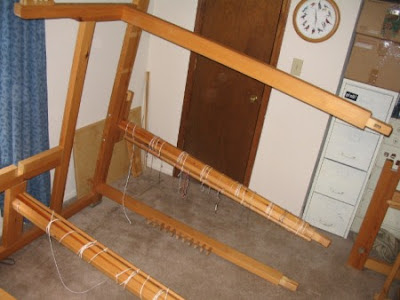 Pardon the rather crookedy photos. Due to the size of the room, I couldn't get back far enough to photograph the entire thing. So I used the hold-the-camera-up-and-back- behind-your-right-shoulder-and-hope-you've-aimed-good-enough method. I had cleared out our spare room, which until now had been a storage room, junk room, and general catch all for things we wanted out of sight. Actually, it was good to do some spring cleaning in order to make room for the loom. 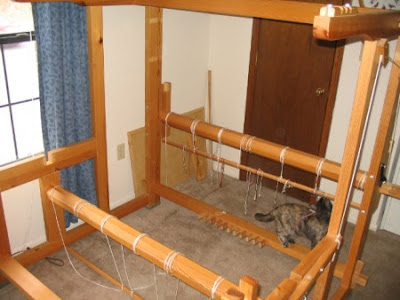 No nails or screws are used for the frame. It is held together with wooden wedges. Catzee was in charge of inspection and snoopervision. Fortunately we didn't disassemble it completely when I bought it. The countermarche with the shafts and the beater remained assembled. All we had to do was set them in place. 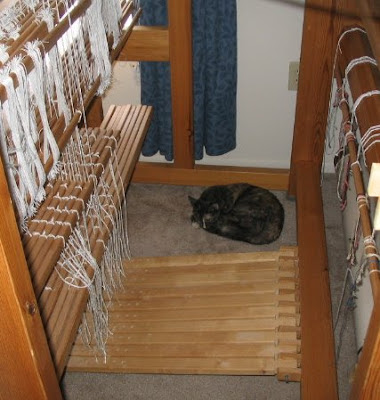 As you can see, there is plenty of room to get in there and work with anything that needs adjustment. Cat included for size comparison. Unlike my jack loom, the treadles are attached at the back rather than the front. 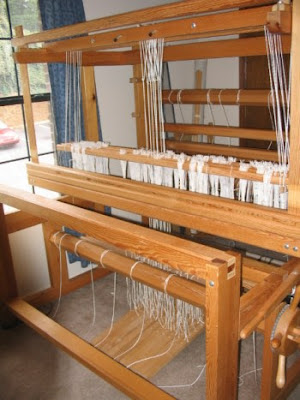 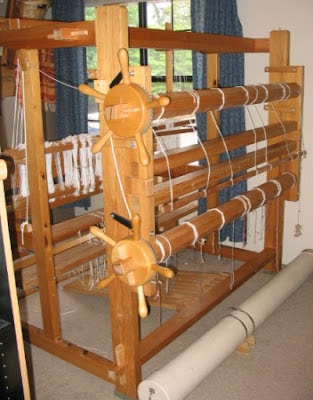 And here's what it looks like from the back. Both warp beams are in place. The long tube on the floor is the reed holder. Very clever I think. It was made by the previous owner's husband. She warped front to back so there is no raddle however. One other thing I'm delighted with is the top part of the frame which will be very useful for winding on the warp. I can hang the warp over the top and weight it with my milk jug weights. I'll be able to wind on quite a bit before having to move them!

Next, adjusting the loom with the Texsolv system.

'It's a beauty, Leigh,' said she, wiping a smidgeon of envy drool from the corner of her mouth...

And now you just have to warp it and get going! (rofl) ;) Has Rascal learned to help with warping?

Wow! That's HUGE! I hope you enjoy many hours of making lots of fun projects...without too much help from your favorite helper, Catzee. ;)

I would be interested to see how you are going to use the top frame as a "trapeze" from what you said it sounds to me like that is your plan. I tried it with mine and it did not work....can't remember exactly why but it did not.
I could not figure out how that reed holder works. Could you please explain?

Leigh,
Wow! I know just how excited you are! About a yr ago I became the proud possessor of a 1938 Schacht that resembles your wonderful new toy. Same type of construction, assembly, principle. Narrower, older, few shafts and a single warp beam. I had a good time putting it together. Before I can use mine, however, I need to figure out what's missing and finish the assembly.

I think I'm going to be paying close attention to all you share with this loom. There is so much I have to learn about working with a countermarche - starting from ground zero.

Of particular interest, as Laritza mentions, is using the top frame during warping. Right now, I use the metal breast and back beams, jury-rigged, as a trapeze of sorts for warping my smaller Leclerc. That will end when the larger loom goes into work, and then I'll need a method for warping it.

Thank you Cheryl, Kathy, and Renee. My two helpers are very watchful of anything that has to do with yarn or thread, especially if it moves! I finally figured out that it's best to wait until catnap time to do things like measuring warp and dressing the loom.

Laritza, the ends of the reed holder pull off easily so that the reeds can be slipped out either end. Also, I was very interested that you have already tried a trapeze type of arrangement with your Glimakra. At this point it's only an idea I want to try; I don't have a clue as to how to actually do it!

Donna, I plan to put all my countermarche learning on my blog! It is so helpful to try and describe the new things I'm learning in my own words. You should consider starting your own blog! I would be very interested in seeing photos of the things you are describing.

Leigh, how much time does all this blogging occupy? Photos, composing, not to mention figuring it all out...I barely find time to use a loom after my 12hr M-F job (where I steal a few minutes at a time and call it "break")...'sides, if I were writing my own, when would I get to read yours???? LOL -donna PS your musings are far more creative and interesting than mine :)

Wow - you're moving right along! What's your first warp going to be?

Donna, I confess that my blog takes quite a bit of time. I'm very fortunate that at this time in my life I can devote almost my entire day to my fiber and textile pursuits. If I worked your hours I'd probably spend every precious moment at the loom too. OTOH, there are no blogging police that tell you how often you have to post. I can be once a month or less! It can just be pictures! I just figure that all the time I spend on the blog is also an investment in myself and what I do. It helps me learn, helps me set and keep goals, plus I love the encouraging and helpful feedback.

Cathy, I'm thinking about a blanket for my guild's service project. It needs to be machine washable and I've always like acrylic yarns for an inexpensive way to experiment. We'll see!

Hi Leigh,
You will love this loom. I have an 8 shaft loom almost identical, although it isn't a Glimakra(it is a Thorpe NZ loom) but is based on it. The countermarche action is just a pure joy to weave on and having two warp beams adds so much extra to what you can weave. I know you've chosen well with this one.
Kaz