It all started harmlessly enough when I saw the ad for a used 8 shaft loom.

Seeing the ad led to a comment about it to my DH.

Which led to an encouragement to call the number.

Which led to a "can we just come and see?"

Which led to a trip to the bank "just in case."

From which there was a trip up the mountain.

And then we walked into her studio.

I looked at DH and asked, "But do we have room for it?"

To which he firmly replied "Yes."

We circled it and stared at it. I didn't know what to think.

"But can we fit it into the truck?" I asked.

Dh looked at me once again and without hesitation said "Yes."

Nobody said anything. I asked a few questions, but actually I was stalling. DH and I had both known that eventually I would get a bigger loom, but that was still years down the road in my mind. At least until after the kids graduated from college. I just couldn't switch mental gears fast enough.

"Well, are you ready?" the Weaver asked.

My mind was saying "I don't know" but I heard my voice saying "Yes."

So apart it came and into the back of our little Chevy S-10 pick-up it went.

After we'd climbed into the truck and started to head back down the mountain, I turned to DH and said. "I almost couldn't do it. I started thinking, 'What in the world am I getting myself into,' and I almost jumped up and screamed 'I've changed my mind!' "

"You didn't think I'd actually let you leave there without it, did you?" he asked. But by that time my brain was in full gear, trying to figure out where in the world we would find the room to set it up. 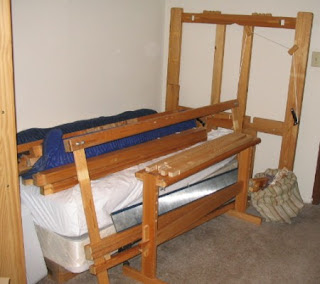 ..... with a few other odds and ends scattered about elsewhere.

Fortunately it came with a video which will show us how to fit it all together again. In the meantime, I've embarked upon a spring cleaning project to make room for it. I'm still wondering what in the world I've gotten myself into, but at least now I'm looking forward to finding out.

Next, Setting Up the New Loom

You got yourself into a LOT of FUN! My first and only loom was a Dorothy. I attempted to weave a couple of pieces on it and could never get it to work. I decided I had to get a REAL loom and found a Glimakra Standard! 47 inch :) I saw it for the first time when my friend brought it to my house and I had never seen one in person. I have not looked back ever since. Just get the handle on the tie up and you will be all set and ready to go. Email me if you need help with the tie-up. and CONGRATULATIONS!

Well good for you! I can't wait to see the beautiful things that you will make on this loom! T.

Oh Leigh, how wonderful for you! It's quite a journey walking along that 'slippery slope', isn't it? But certainly you knew in your heart it was the right choice (or at least DH did!). Yep, from here on it'll be a great excitement to see what that baby will do!

I myself sit on the fence of indecision. I know that I haven't explored to the limits of what my 4 shaft can do. But then I see patterns only suited for 8. And so, the thought lurks back there of possible future upgrades......

Lucky you! The looms in that class are rather large. We have a couple of countermarches at the school. I also have a friend who has one that takes up the whole room in which it is used.

I can only imagine what you'll be exploring next!

I am looking forward to new explorations in the weaving area soon! but I have to say - your husband must be a great guy to encourage you like that!! I think most wouldn't do that where a huge loom is in question:))

Oooooooo! Love it...I really like that loom...It has been on my wish list for 20 years. Someday... I know will will enjoy it.

What a great story. I wouldn't have a loom if it hadn't been for my husband. He went to a funeral in San Diego and swung by Stockton on his way back to Reno to pick up my first loom from Gilmore - it's not like it's exactly on the way. I'm not sure I would be a spinner either without his encouragment. He urged me to attend a guild meeting and then supported the purchase of my first wheel. I know how fortunate I am.

WONDERFUL!!
I bought my first floor loom when my DH was in Maine on a hunting trip. Not that he care just a little surprised. Your hubby's a keeper.
We'll all be waiting for pictures of your first project.
Have fun!

Oh Leigh,
Congratulations! You will have so much fun exploring 8 harness patterns.
It was great seeing you Saturday.

Congratulations! Don't look back...enjoy every moment of the journey ahead.

At least it doesn't eat hay and give birth during the coldest days of the year, Leigh! (LOL) Congratulations on your new baby! What's her name?

How exciting!! I'm so happy for you - I know you'll be puting it to good use. I have a feeling your lucky readers (myself included) are in for lots more great weaving posts!

Congratulations on your new loom, but even more on your DH!! I am sure many fiberholic sisters envy you... mine is the same type as yours by the way - once I had spred an unaccounted number of fleeces for drying and sorting, covering every inch of the livingroom floor - his comment was "this looks just like home!" with a big grin - he is from Wales..

Congratulations! If anyone can master that loom and use it to its fullest, it is you. Can't wait to see your progress.

So much fun to get ready for empty nest... much easier then afterward!

Your DH sounds like mine - the best kind to have.