To help myself get over the feeling of being overwhelmed with my new loom, I first took some time to explore the differences between it and my old one. Both the Glimakra Standard countermarche and the Schacht Mighty Wolf jack loom weave cloth, but it amazes me that there can be so many differences between the two.

The most obvious difference is size. While the Schacht fits comfortably into a corner in my living room, the Glimakra takes up an entire room.

Another obvious difference is the way the beater is attached: 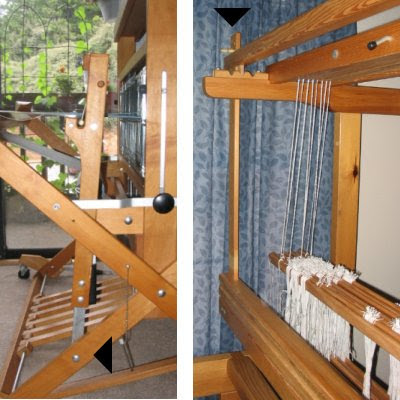 The beater holds the reed and serves to pack the newly placed weft into place.

On my Schacht loom on the left, the beater is hinged at the bottom. The advantage of this is that it stays put during weaving, whether forward or back.

On the Glimakra on the right, you can see that the beater hangs from the top (reed has been removed). It rests in the beater cradle and can easily be lifted off and removed from the loom for warping. The cradle has three notches, so that the beater can be advanced as the weaving progresses. The advantage to this is not having to advance the warp quite as often. The bar itself is quite solid and heavy, but the frame is still easy to move.

One thing I did with the help of the video, was to check to make sure the that beater bar is parallel to the breast beam. It was off by about half an inch after being moved. It was very easy to adjust by loosening the nut and bolt on top of the cradle, sliding the cradle until I was satisfied with the measurement, then tightening them again.

One thing I noticed from the video, is that since the beater swings, it has to be held back to throw and catch the shuttle. That will take some getting used to. Evidentially, it is possible to gain such a rhythm as to let the beater do all the work; the weaver simply throws the shuttle between swings and keeps the beater moving. Of course, that's them and this is me.

The other obvious difference is the system by which the treadles move the shafts. On my jack loom, it is a beautifully simple thing: 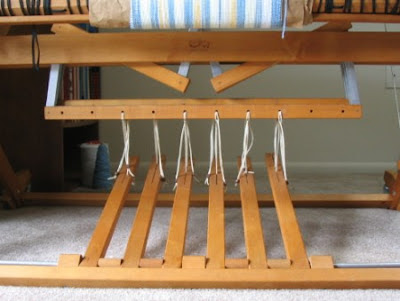 In this photo you can see the jacks, the lamms, and the treadles.

The jacks are the diagonal bars which are partially hidden by that bar under the cloth on the cloth beam. The jacks are attached to pivots which enable them to push the shafts up when the treadles are pushed down.

The lamms are the horizontal sticks below the jacks with the strings hanging from them. On this loom, I have four shafts, each having it's own lamm and it's own set of jacks. By choosing which lamm strings to attach to the treadles, I can determine which shafts raise which treadle. It's possible for a weaver to tie-up all sorts of combinations, anywhere from 1 to 3 shafts at a time. By depressing the treadles in a prescribed order, the jacks push up the attached shafts, and my weaving pattern appears almost magically on my cloth (assuming I haven't made any mistakes.)

Now, here are the lamms on the countermarche loom: 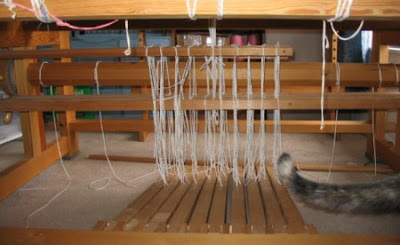 A countermarche loom has two sets of lamms, an upper and a lower. This loom has 8 shafts, so there are 8 upper lamms and 8 lower lamms. Both sets have strings (cords actually) hanging from them. One set raises its attached shafts, while the other set lowers its attached shafts. The tail in the lower right hand corner of the photo is optional and nonfunctional in regards to weaving, except that what it's attached to likes to attack strings and yarn.

Obviously the tie-up system is a bit more complicated than on a jack loom. I'll be learning about the tie-up when I put my first warp on this loom. (Have I mentioned yet that I feel a bit overwhelmed???)

The jacks on a countermarche loom are overhead, right behind the beater: 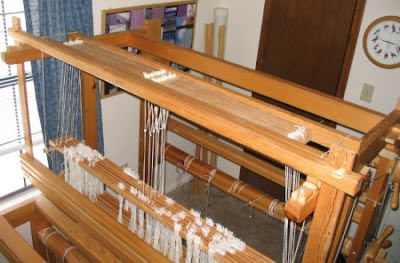 You can scroll back up to the first photo to get a view from the under side. The shafts are attached to the jacks on either end, while the cord running down the middle attaches the jacks to the lower lamms. 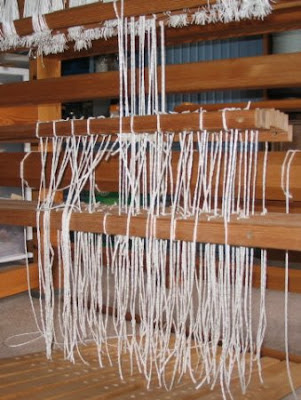 The upper lamms are attached indirectly to the jacks by being attached to the lower lamms with a separate cord. But who can see that from the forest of strings hangning there. Well, I'm at the point where the more I try to explain this, the more confusing it sounds. I reckon I'd better quit while I'm ahead.

I can see the Glimakra is ready to rock and roll! You go girl!

Countermarch are very different from jacks and counterbalance looms. Very different! I forget sometimes that not everyone has access to as many types of looms as I do. At the school, we have all three types of looms as well as one of Peter Collingwood's shaft switching rug looms. We have a bunch of Lecerc's ( both counter balance and jack, 4H and 8H, as well as a few up-right tapestry looms, and a 12 H computer loom ), a couple of Clement direct tie up rug looms, an 8H and a 12 H Macomber, a Toika countermarch and an Oxaback countermarch, a 16H Louet computer loom and a few table looms. Not that I have woven on all of them. I usually get last pick after the students. The studio head is really good about encouraging students to try out different looms so that when they come to purchasing one, they have a bit of knowledge to work with.

Countermarches are a pain to retie, but once you get used to it, they are great to weave on. The best part is that you can get a good shed with unbalanced harnesses. (ie 1 up 3 down like for double weave)
A word of warning,(which you may already know) If you put on a pattern that has two harnesses with a lot of plain weave and the others with very few threads for pattern- like some huck- it is best to spread the plain weave harnesses out. So instead of having the majority of threads on harnesses one and two, have them on one and four, or one and six. Don't ask me why this works, but it comes from experience. A student had this problem with a wide warp that she was weaving and we fussed and fiddled and couldn't fix her lack of shed. So she rethreaded all 1500+ threads and had no problems.

I must confess that I've always been a little afraid of the tieup on the "counter-" looms. It sounds so complicated compared to the jack. I'll be watching with interest....

...your post leaves me wishing I knew how to weave....

do you know that feeling that you've been on another planet for a while.
So I turned my back and you change the look of your blog and get a new loom!!!
wow you have been busy!
it looks great
congratulations on your new addition. cant wait for the end results!!
Al x

Now all you need is an AVL with the automatic advance and the computer dobby...then comes the chimp to throw the fly shuttle. ;)

I now have a Mighty Wolf (8H). I used to have a LeClerc Nilus, 4H with a fly shuttle. I am sorry I ever sold it as I loved that loom. I used to keep the tabby material in the fly-shuttle when I did Colonial Overshot and I always knew what treadles to use from which side the shuttle was on (for the tabby).

I can hardly wait to see how you like using this loom, as I've only known one other person to have one. The overhead beater will be nice as it reduces the effort needed to beat - not great for heavy rag rugs, but wonderful for everything else!

I've had absolutely no exposure to a countermarche loom, so I'm looking foward to following your progress. I'd be curious to know your reasons for choosing this loom as well as if there are some things that are better done on a countermarche loom. I don't forsee a day when I'll have a second loom, but I suppose it could happen!

Wonderful photos and explanations. By the way, what Jackie said about spreading the threads out so the majority are not on two shafts only is good advice for jack looms as well. And one of the things that does is to make those two shafts less heavy to treadle, though with rear-hinged treadles, the treadling will be much more easier.

Wonderfully explained, Leigh.
Among the information you have explored, is Joanne Hall's book "Tying Up the Countermarche Loom" one of them? Is it a good buy, do you know?

the Blogless One (Donna)

Donna, I just ordered that book!

Thank you to everyone for your encouraging comments and suggestions. I value the experience of others, though I confess that I probably learn the most through my own mistakes.

Oh, that's exciting for me Leigh. I've just purchased a loom. Have no idea how to weave. Did not intend to buy a loom now, but this loom was a 'steal' at $150, so I decided to go ahead. Setting it up was easy until it came to the tying up and gosh does that look complicated! Also, I had no idea what sort of loom I had purchased until I saw your comparisons. Mine is countermarche with six pedals. I will have to look for someone to teach me, but until then I read and read to gain some knowledge.

Thank you for all your wonderful blogs.
Carmen Slee

Dear Leigh,
I was searching for tying up a countermarch loom (in the past I did it once), but your blog helped me!! again.
thank you
betty smit
the netherlands
www.weavingfun.blogspot.com

Carmen, I know you will love your loom. And you will love learning on it too. I'm sure you'll find someone who will get you up and weaving in no time!

Thank you Betty. I blog because I like to share what I'm learning. So glad to be of help to others.:)

Well, and now your LeClerc Nilus is back home again! :)