After I completed my summer & winter sampler from the Online Guild weaving workshop, I decided that I needed to go back to the beginning and work more slowly through the workshop notes. Samplers are fun to weave and an excellent way to explore ideas and to test yarns, colors, setts, shrinkage, etc., but I find that if I really want understand a weave structure, then I need to spend some time working with it. It is not only my head which needs to understand it, but my hands and feet need to understand it as well. So I went back to my idea of weaving dishtowels as samplers.

I warped my loom in 8/2 lime green cotton, set at 16 ends per inch; enough for 6 dishtowels. My tabby weft was the same as the warp, and my pattern weft was a navy 5/2 cotton. I threaded a simple repeating Fibonacci sequence (1, 2, 3, 5, 8) and treadled it the same way, aka "as drawn in." I previously shared the threading for two block summer and winter with you in this post. 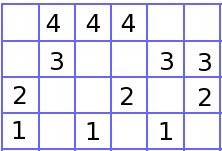 The tie-up I used is on the left. I believe that it is pretty standard for a four shaft, six treadle loom. The first two treadles on the left alternate to create the tabby weave. A tabby shot is thrown between each pattern shot.

With this tie-up, I wove through the four basic summer and winter treadling ways, and then tried two more for the last two towels.

First is the traditional way of treadling which close-up, makes the weft look something like bricks in a wall. (Can't see it from this photo I'm afraid.) The pattern is treadled by alternating the pattern shafts, 1-2-1-2. So one block is woven on treadles 3 and 4, the other on 5 and 6, each time with a tabby shot thrown between. 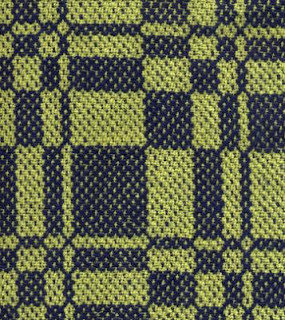 You can see the X's in that pattern above. I liked the look of that one.

Then I wove a towel in the O's treadling, which is also a paired treadling, except that it starts on the other pattern shaft. So it is treadled 1-2-2-1. 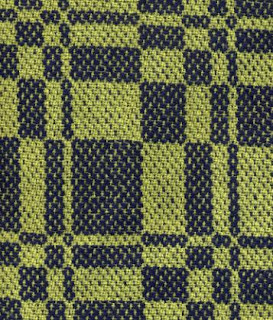 The thing about the X's and O's is that since summer and winter is a reversible weave, then no matter which of them one weaves, the other appears on the back side. While I like the X's pattern better, I found that the O's was easier to keep count of while I was weaving.

The one I really like, however, is the dukagång treadling, which weaves columns. 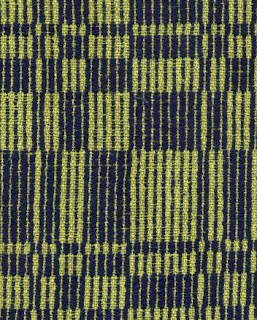 It can be woven two ways (on a four shaft loom) by choosing either the first pattern shaft or the second. Mine was woven by simply alternating the 3rd treadle with tabby, or the 5th treadle with tabby, depending upon which block I wanted to weave. I could have used the 4th and 6th treadles if I'd preferred. But I didn't.

The next towel I tried in polychrome, which is a variation of summer and winter which requires two pattern weft colors in addition to the tabby. Each color is shot, and then the tabby, so that the tabby shuttle is thrown every third pick. 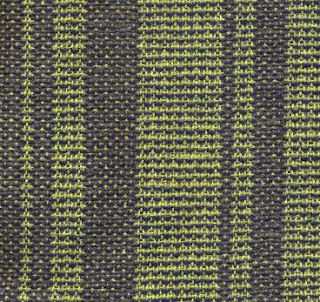 At this point I hadn't figured out how to alternate for the blocks, so I wove stripes, but I really liked the effect and immediately started the mental planning for a polychrome project. In addition to the lime green tabby and navy blue weft, I added a dark gray 5/2 cotton for my second pattern weft and got the above result.

After this I had enough warp for one more dishtowel, so I switched the tabby and pattern wefts, using the lime green for the pattern shots, and the navy for the tabby. This resulted in a muted effect, below. 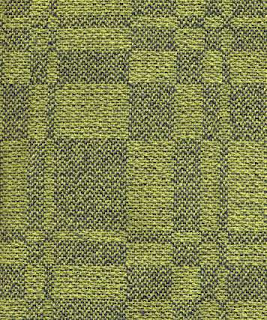 These barely scratch the surface of what can be done with summer and winter, and I have the feeling that I may be spending a long time exploring the possibilities.

Well done Leigh! These are super summer and winter samples. I enjoyed following your methodical development from one sample to the next. The dukagang looks distinctly different. Are you using mercerised cotton? I would imagine there'd be a nice shiny satiny look. The polychrome sample seems to have extra depth and texture - it makes me think of upholstery, where say you want a fabric to cover a chair that doesn't dominate it, but has extra quality when you look twice.

I'm temporarily planning to get back to twill to finish the current warp, then I have my new loom aprons to sew up before I go back to summer and winter. Getting the warp tension just right seemed more critical than it had been with twill - I think warp aprons will make a big difference for me.

Can you please move next door to me so we can play with this more? I really like what you've done. One of these days I'll have to try my hand at summer/winter.

You explained the pattern so simply that I think I got it :o)...I really wished I lived next door, maybe then I wouldn't be selling my loom..I got mislead from the very beginning with my weaving lessons...:o(

Leigh, I'm taking a Summer and Winter workshop in three weeks -- this blog entry was so helpful!

Padre, you are very kind. I'm so glad this was helpful to you. It helped me to write it out.

Thank you for this wonderful explanation of the x' and o's. I will certainly return to this when I do my next S&W project. The first one I did was a cookbook recipe out of Handwoven and I just did what I was told, as it were. Now I am beginning to understand what I did.