I can’t tell you how much I have appreciated the supportive and encouraging comments I received on my last post. It’s especially interesting to read when and why weavers choose one method of warping over another. This is helpful information!

Ok, this is where I left off with my b2f warping a few days ago. ( I know, I know, this is actually a thinly veiled attempt to pass off another disgustingly cute kitty picture.) :-) 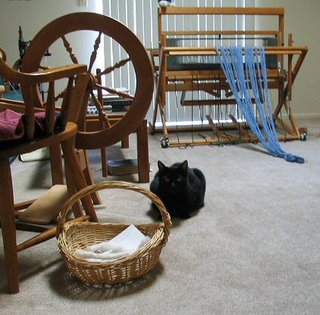 In doing my research I realized that there is no one single way to warp b2f. I chose Chandler’s instructions, and occasionally refer to Osterkamp. For the most part things have gone pretty well so far.

Some things have been familiar to me:

Some things have been new:

The thing that was my biggest concern however was the way the warp wound onto the warp beam. Instead of a neatly behaved warp in a solid layer, I had “clumps” of ends with spaces between the raddle spaces, as you can see: 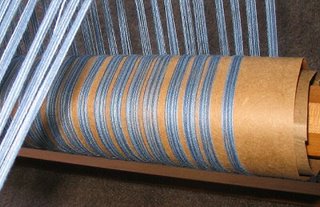 I understand now that the “valleys” between these groups create uneven spots and hence potential differences in tension across the width of the warp. The only things I can think of are to try and keep the warp spread out in the raddle better (next time). Or perhaps my raddle spaces are too far apart(?) They are ½ inch and I am using 16/2s cotton sett at 24 epi.

So here’s were I am at the moment. You can see the warp ends spread across the lease sticks and hanging about heddle eye height behind the 4th shaft: 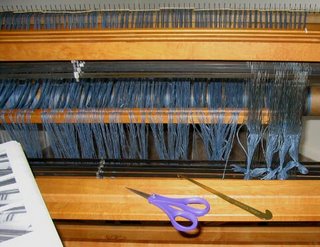 Progress will probably be a bit slow, as I've only begun to thread the heddles. But I am motivated, so hopefully it won’t be too long before I can see how well I’ve done and start weaving.

Leigh, When I warp back to front, I put the raddle in the beater, where the reed usually goes. The warp then travels over the lease sticks before going over the back beam to wind on the warp beam. My raddle has 1" segments, and I've woven at 36 epi w/ it. So I don't think your 1/2" raddle spacing is the difficulty.

My raddle has 1/2" spaces too, but when I do b2f, I hang the warp off the back of the loom. my raddle is a home made one that would not fit in my beater. To tension, I make 3/4 of a turn and grab the warp in one inch bunches and using the weight of my body, pull each bunch downward. I usually also start on the left for one turn, then the right for the next. There is an entry at my blog showing what this looks like here

In the first photo, you can actually see the bunches that I just finished pulling. With this method, There might occasionally be a bit of space between the warp on the back beam, but for the most part, everything is evenly spread.

I forgot to say that if you can take the front beam off, do so and you will not have to reach as much. It looks like you have a jack type loom and I put blocks under my harnesses to raise them when I am threading so that I don't have to stoop as much.