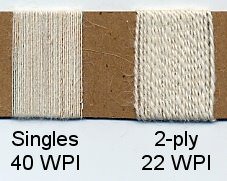 I should be ashamed at how long these alpaca singles were on the bobbins. Almost eight months. But I need the bobbins for a workshop and so here is the skein of plied yarn.

For me at 40 WPI, this is fine spinning. When I was a new spinner, drafting out thick and slubby yarns, I determined to learn to spin fine smooth yarns. Gradually I gained control of the fibers instead of them controlling me and my yarns became finer and finer. But….. to my dismay it took a long time to spin finer yarns! My impatient nature wanted quicker results. I wasn’t interested in projects that took too long. My imagination would move on to other things before my hands had finished their work.

And then came the knitting (I rarely use my handspun for weaving.) Finer yarns and smaller needles also proved to be frustratingly slow. I felt something of a quandary. Aren’t fine yarns the mark of a good spinner? Don’t they prove that I’m no longer a beginner?

Finally it dawned on me to accept myself and my preferences and simply spin and knit what I liked, no apologies. I know that statement seems like a no-brainer, but it was sort of an epiphany for me. I had to give myself permission to not worry about what other people thought.

Actually, this was only a small part of a larger area of growth for me. But during the less tangible aspects of my personal growth, it turned out to be a good illustration for me to hold to. And it still is. Patience on the other hand, is something I'm still working on. :)
Posted by Leigh at 12:06 PM

Yes, spin and knit what you like, but occasionally stretch yourself. You might find yourself changing. One never knows..... I bet the alpaca is scrumptious!

The alpaca looks great.
I won't tell you how far I have got along with mine.
I always spin with the intention of knitting.
I prefer fine yarns, but will happily knit somewhat thicker handspun.
It just has a different handle form commercial yarns.