What I've Learned About Tracking

Actually, I've learned a lot, especially from all the helpful comments on my "Placemats?" post. There were so many positive responses to the textured look that tracking gave to the placemats, that I had to stop and think about this for awhile. Just why was I disappointed with how they can out? Two things have come to mind: preference and expectation.

As Taryl pointed out, much of how we react to things (in this case my placemats), has to do with differences in taste. If truth be told, I would have to say that my personal tastes run toward casual. I like a comfortable, welcoming, country natural look. So in one way, the tracking appealed to me. But as Valerie mentioned, not everyone likes the casual look of such a fabric. The intended recipient of these placemats is pretty much opposite to me in taste. Her preference is for the more formal, classic look. My dismay stemmed from the fact that the end result didn't meet my expectations.

Bspinner commented, "Amazing isn't it how what we put on the loom isn't always what comes off?" As weavers we know this! So why should I be surprised that my weaving sometimes surprises me? The unpredictability is one of the things that keeps weaving interesting to me. I love what Bonnie said, "I think of it as a gift from the yarn." Well put!

On the other hand, I agree with Alison, that it would be nice if we could predict and exploit. Is that possible I wonder? I have an idea in my head that if I can gain enough experience and knowledge about weave structures as well as yarns, then I'll have a greater degree of control in planning my weaving projects and their outcome. Even if this is true, I realize that the element of the unplanned outcome will still be there from time to time.

So what have I learned about tracking?

It only occurs with plain weave and only after the fabric has been agitated in water.

Textil pointed out that the sett is a factor. The more open the sett, the more room the threads have to twist. My sett (16 epi) did result in a somewhat open weave. Even after washing it is not a dense cloth.

Peg confirmed that the yarn also has a lot to do with it. In fact, she recommended Peggy Osterkamp's third volume in her "New Guide to Weaving Series", Weaving and Drafting Your Own Cloth.

It just so happens that I recently purchased this book, though I really haven't had a very close look at it yet. As Peg pointed out, on pages 166 to 169, there is an extensive discussion on tracking, including what causes it and how to prevent it. In reading this section, I learned that in order to prevent tracking in this fabric, I should have set it before washing and drying.

The process of setting the fabric is referred to as "crabbing," which uses heat to shrink the yarns by relaxing their inherent twist. Once set, the fabric can be washed without tracking occurring. Peggy's book describes two ways for the handweaver to do this in the home setting: in a washing machine with the hottest water available and without agitation; or with damp pressing cloths and a very hot iron. The idea is that tracking won't occur if the item is never washed in hotter water than was used for crabbing. Commercial cloth is boiled while under tension, something which probably isn't convenient for most of us, though the book does describe how to do this.

For my placemats, the tracking is permanent, though pressing can help temporarily, especially if the fabric is pressed while still damp. Peggy did mention that after subsequent washings the tracking should be less, and indeed, Kim confirmed this with her own experience.

So, how do they actually look with the dishes I wove them for? 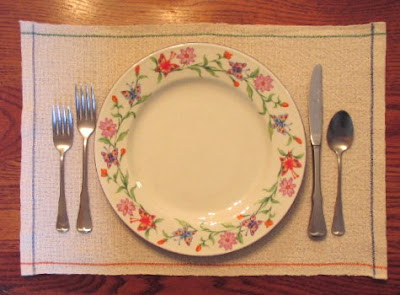 From a distance it isn't noticeable. 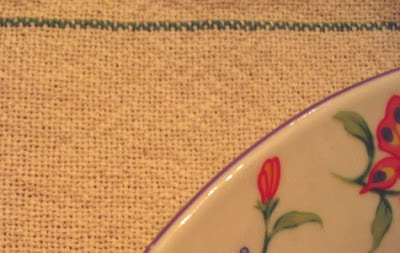 Close up it is still there, though subtle after pressing. Then too, Jacqui reminded me that if the fabric were smooth and slippery, it would be less suitable for placemats.

Still, I'm not sure if these particular placemats are suited to the dishes. However, perhaps I'll just let the recipient decide. I know that she'll appreciate that I handwove them with love. Hopefully, that is the important thing in the end.

Related Posts:
Placemats?
Posted by Leigh at 12:02 AM

Take another look at your last photo. The "design" looks planned. I love tracking, love the look of it. Don't fret. I bet you dollars to donuts that your friend will love the placemats! They are lovely.

Since I will never be able to predict and exploit, I'm going with "a gift from the yarn." I think they look great! I understand though the disappointment that they weren't what you anticipated. Go with The Gift.

One thing I have learned from spendning most of my life in yarn.

It knows what it wants to be even if we don't. If you fight the natural tendencies of your fiber, or dislike them, the projects look discordant. But the right fiber, the right prep, and the right processing creates cohesive, attractive, long-lasting looks.

I think you got some yarn that dreamed of being a twill skirt. The tracking very much reminds me of a twill.


That discussion on the causes and prevention of the tracking was indeed very informative, but in this case I truly believe that tracking makes the placemats less ordinary. If the person they were made for doesn't like them, I am sure some blog lurkers would be more than happy to liberate them to a good home ;)

i agree with Taryl.

as much as i wouldn't want for handcrafting to drop to the T-ball philosophy* where friends love their gifts only because of the effort, the placemats are gorgeous. i will be gobsmacked if your friend does not love them on sight. in that unfortunate instance, we (the peanut gallery) will be happy to compete for the honor of owning them. :D

*"We all tried so we're all winners! Its is the effort that counts!"

They sure are pretty!

Well, if there's a contest, raffle, giveaway, or drawing of virtual straws for these I want in. They match my dishes, kitchen, silverware, kitchen cabinets etc.. I like that they look unique unto the yarn that was used for them. They're simply beautiful. I'm sure you won't need to raffle them off, but the lurkers can hope, can't they?

Loving all of the comments and can only join in the appreciation of beautiful and unique placemats. I can share in your disappointment of final product but I am learning to go with that "gift" of the yarn! And the yarn mixed in with human error (mine, not yours!)

I haven't had any experiences with tracking, but I do think the place mats look beautiful with those dishes!

Yes, the more you learn about fibers, yarn structure, and fabric structure, the more control you'll have and the more predictable your weaving results will be. However, there are always going to be "happy surprises" to remind you that, ultimately, reality is the boss...

I think the placemats are charming.

Peggy O is a great resource. If you get the chance, take a class from Sharon Alderman. I've learned a lot about weave structure from her. Stephenie Gaustad is the one to go to for yarn structure classes, and she's an amazing weaver, too. --Syl

Not being much of a "planner," I have learned to live with and even love the happy accidents that occur with my projects. But, I think you really hit on the main idea at the end there. They were woven with love and by your very own hands. To a non-weaver, that is an amazing and impressive thing. And every track tells the story of the weaving, right?