OK. So here is the information on that Shetland yarn I was plying when I showed you how I ply from a center-pull ball. 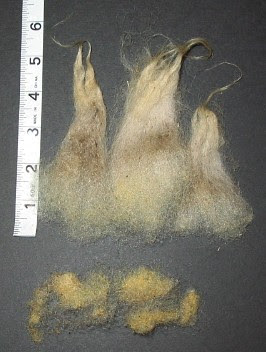 This dual coated fleece measured anywhere between three and seven inches. The crimp in some places was nonexistent (as you can tell from the photo on the left), but in some staples it measured four crimps per inch.

Besides being loaded with vegetable matter (VM), the most noticeable characteristic of the raw fleece was that it had a thick, matted looking layer of yellow at the butt ends of the staples. Fortunately, this separated easily, though it was greasy enough that I decided to wash it before removing it all.

Since I had parts of two different fleeces in the bag and the white was dirty enough as to be indistinguishable from the fawn, I decided to wash them together and sort them out afterward. When I discovered that I didn't have enough mesh bags for it all, I also decided to try this method of machine washing.

The result was beautifully clean and fluffy. I could easily separate the two colors and decided to spin the white first. I used my dog comb to comb out the second cuts and much of the VM. (Next time I have a VM laden fleece however, I'm going to try out Laritza's method of dealing with it!)

I only had to run it through my drum carder one time to prepare it for spinning. With that it was delightful to spin (except for still having VM to pick out), very soft and silky to the hand. 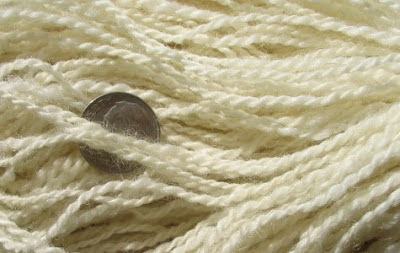 This photo is not entirely accurate colorwise, but the closest I could manage with my camera (I do miss my scanner!) The singles were 30 wraps per inch, and the 2-ply is 17. Of the 100 grams of processed fleece, I ended up with more than 218 yards of yarn.

Colorwise, how does it compare to my other Shetland whites?

Interestingly, they are all different. Until now I would have thought that white is white is white. Not so! Which makes Shetland all the more intriguing to me. I love this breed.
Posted by Leigh at 12:51 AM

white is white is white? no way! I love these differences, which seem to occur more in old breeds, or so it seems to me. there is an old german breed, coburg fox. from afar it looks like off-white, eggshell, chamois or whatever you want to call it. but at closer inspection single foxbrown fibres can be seen - which give the overall yarn a slightly beige colour. of course the sheep have brown heads and legs, but you cannot see this in the fleece. I wanted to do a woven sampler and decided to use the coburg fox as background - it shows the browns and greys - and the whites! no comparison to the real whites - the show up well in it! maybe white is white is white - only with artificial fibres?

Lovely yarn! Yeap white is not always the same white!

beautiful spinning, as usual.
I love shetland too - which is why I used to own them. they are the sweetest little creatures.
And I always noticed that every single one's color is just a bit different!

Thanks so much for the washing link! I still wash fleeces by hand since my washing machine died a while back after too much felting. (who knew???)

But, I'd really like to be a bit more efficient when washing fleeces. I don't do it often and am always shocked at the amount of work it takes when you do it in small lots by hand!

I love Shetland too, it is one of my favourite wools. I wonder if all of the different whites would take up a subtle difference in colour in the dyepot. I shall have to experiment.
Have fun!

Look at all those lovely Shetland whites!

Thank you for the link...it was interesting to find out that the Shetland in the US have been bred to decrease the double coat with guard hairs...(this explains why I didn't find a true double coat when I examined the fleece I received!)