It's been awhile since I've blogged about weaving. This is partly because a lot of other things have popped up, but also because I've had my last weaving project off the loom for awhile and have been wondering what to do about it.

About a month ago, I posted about preparing to weave some placemats (that post here). Weaving went well, but once the fabric was off the loom and machine washed and dried, I discovered that it looked like this: 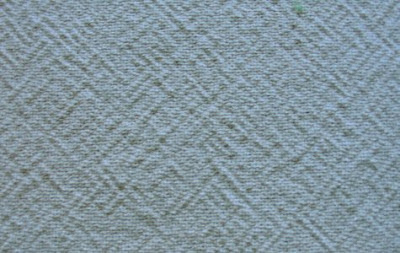 This is plain weave with 8/2 unmercerized, unbleached cotton. The diagonal geometric textured effect was totally unplanned and not exactly what I was looking for. As I puzzled over it and whether or not I liked it, I vaguely recalled that this phenomenon is called "tracking."

Finally I decided to see what pressing would do. This is what it looked like after that.... 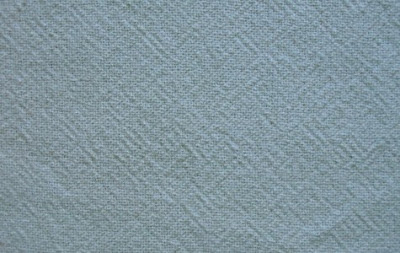 As you can see, this did not completely eliminate the effect. I admit that I wondered whether I might have gotten better results if I had put more time and effort into pressing. On the other hand, my plan for this fabric was easy care placemats as a gift. I doubted that the intended recipient would be willing to go to very much trouble to keep them smoothed out.

Still, I puzzled over what had caused it and how to prevent it in the future. At first I figured that it must have something to do with the type of yarn I'd used. So I googled, "weaving tracking" (without the quote marks). From that I found Holly Shaltz's web page, in particular an article entitled "Plying a Balanced Yarn". From this article I learned that tracking is related to unbalanced yarn.

To be honest, I don't know a lot about commercial weaving yarns. I took a closer look at the yarn I'd used .....

..... and observed some inconsistencies in the twist. I never would have thought to check that out first, but it does confirm the wisdom of that well-worn (if not somewhat dreaded) phrase, "Sample, sample, sample."

So. I will definitely make a sample the next time I use this yarn, which will probably be mixed with other colors and brands of 8/2 unmercerized cottons. As to the placemats? I'm not sure. I reckon I'll move on to Plan B, as soon as I figure out what Plan B is.

Related Posts:
What I've Learned About Tracking
Posted by Leigh at 12:10 AM

I've always liked tracking actually. I think of it as a gift from the yarn.I can never make it happen, but every once in a while it just does.

When I first saw the picture, before I read what you wrote, I thought "Wow look at that nifty tracking."

I'm sure the people who receive the placemats will love them and think you meant to put those diagonals in there:)

Interesting blog, thank you!
To obtain tracking you also need to have an open sett, the threads need to have space to twist. Use a closer sett if you do not like it - I find the diagonals make the weave more interesting :-)

well, *I* think it looks awesome. I completely get that it wasn't what you were after, and that it's not well suited to an 'easy care' gift - and for that you have my sympathy; it's a pain when things don't work the way you expect - but it's really, really cool, anyway. But I bet it's just like my hair in some ways; when I really want the curls, they go hide. If only we could predict and exploit!

I like the look of the tracking very much--and I like the idea of thinking of it as a gift from the yarn too!

i like the tracking. it provides textural contrast and may make the placemats more useful - decreased slippage across the table because of the texture. :)

I had a similar problem with dishtowels I made! They ended up looking quite burlappy, but my teacher explained tracking and the twist, etc. It's so fascinating! But like the others who have already posted, I think the tracking adds an interesting texture. But perhaps it is something only a weaver can love? :-)

I am almost sure that it would even out by mangling. Ask Laura Fry, she will tell you in a heart beat.

I can totally relate to it not being what you envisioned. That said, I have to agree that I find the texture to be interesting.

Leigh, you are right about the 8/2 cottong. Osterkamp lists that as a specific yarn subject to tracking. And she also says it occurs only in plain weave. She indeed has a great deal to say about it, including how to get rid of it in the finishing process. See her "Weaving and Drafting Your Own Cloth," pp. 166-169. You might also search the files of the big weaving list as well as the WeaveTech list. Crepe weave, by the way, is an exploitation of the crabbing principles.

Hehe, see that goes to show what differences in taste account for - I think the placemats look phenomenal. I can understand being a little unhappy that things didn't turn out as planned, but the results could have been a LOT worse (like, broken warp spots due to weak yarn!)

Even though it's unintended, it does make a great effect!

I love tracking...especially in cotton fabrics. However I can see that not everyone would like the "casual" look of the fabric.

It's true that sett and beat makes a difference. I can't help but wonder what the finished fabric would look like in a twill.

I agree with Annie. I think the tracking does add interest espicially on a solid color and plain weave. Amazing isn't it how what we put on the loom isn't always what comes off? In this case very nice!!!

Try washing and drying them 1 or 2 more times. I had this happen on some commercial placemats I had bought after their first wash. (I was quite annoyed at the shrinkage and the rumpled look; I don't have time to iron clothes, let alone placemats!) However, when I washed them again, exactely the same way, they looked more relaxed - still some texture, but not so much like they needed a good press.