A Means to Measure

About an eon ago, Sharon asked about Peg's idea for measuring the length of a project on the loom. Well, by now I'm sure she's figured it out for herself, but for the record, I've been using this method for measuring my dishtowels and have found it to be the best thing I've tried so far (and I've tried a lot of things.)

When I first bought the tape, I got to WalMart and only remembered the "tape" part, so I purchased bias tape. This proved to be too bulky, and when Peg reminded me that she actually said "twill tape," I got some of that on my next trip to the store. My choices were 1/4 inch or 3/4 inch, so I opted for the 3/4. 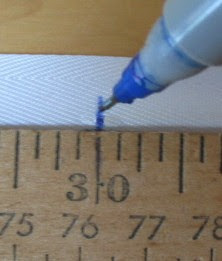 For this project I simply put two marks on the tape, one to mark the point where I want to begin measuring, and one at 30 inches, which is the on-loom length that I'm currently weaving. It would be easy to add additional marks if I wanted to place border designs or note the center of the dishtowel.

Permanent marker tended to bleed into the tape, so I'd probably use ball point pen next time.

The bias tape is only two yards long, so I'm reusing it for each dishtowel. I pin it with t-pins at the beginning ...... 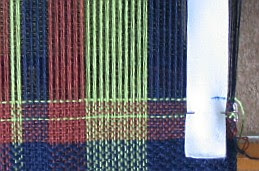 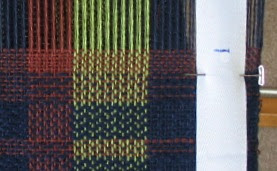 ....... I stop. Then I weave enough space in between towels to sew and cut, re-pin the measuring tape at the starting mark, and begin again. I'm not letting the tape wind onto the cloth beam, but simply moving the pins as I advance the warp.

So far it's working very well and my dishtowels have been all the same length. Yay!

Oh, and one more tip. No matter how much your cats try to convince you that you need their help......... 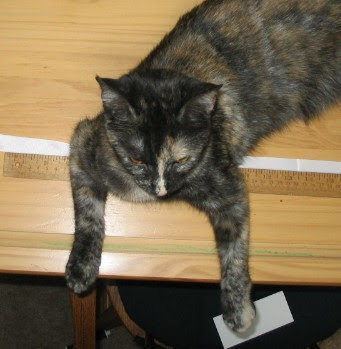 Please note that twill tape in not, I repeat not, cat proof. 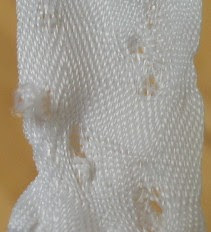 I wonder if there is a store that sells it by the yard. Great idea and one worth persuing.

I'll have to try this next time - I usually use a pin to keep track of what I've measured so far and then keep a little post-it on the loom with a running tally. This sounds much simpler!

Oops, looks like someone was a "bad kitty" - everything is a toy to them, isn't it. I was glad when ours got older, and all they do is sleep :-) T.

thanks so much for this idea - I haven't woven very much (yet) but when I did, I couldn't figure out how to do this. the placemats morphed into an amazing shawl
you're fabulous!
P>S> my kitties would have done the same thing.

You're right about the markers! I mark mine with inch markings and write in the number for every 12". But I like your idea if you are dealing with borders. And I am beginning to like the clean look of your blog..........(grin!)

Great Idea!! And, there is a place to buy twill tape in either 3-yd or 72-yard rolls at a very reasonable price....heads-up, co-op buyers!! Check out twilltape.com, or email or call the very nice gentleman at jsteinheimer@att.net or by phone at (770) 714-8048.

Donna, thanks for the link. What a great resource. Much more economical than buying it 2 yards at a time at WalMart. I see that they have heavy duty twill tapes too. This is good as I accidentally cut the apron rod cords on my front apron rods!

I just use a flexible tape measure to do the same thing, Leigh. It's plastic coated which discourages those kitty fingers from getting stuck, easily pinned to the project and has all the markings already on it. Of course, if I do a longer project I use bias tape, but for the most part my projects are under i meter in length. And I can always use a second one without problems if I have more than one item on one warp.

I use a length of "till roll" (or adding machine)paper tape!

I pin it to the work at the beginning and move it up as I weave. Being a roll, it naturally rolls up out of the way as I move it on.

I saw it in a Handwoven article about 4 years ago and have been using it ever since.