I've been making slow but steady progress spinning my Bowmont fleece. Using the fine toothed dog (flea) comb has worked well to open up this exceptionally fine fiber. It's also helped me catch a problem. I have discovered that there is a break in the fleece in part of the sample. You can see it clearly in the photo below........ 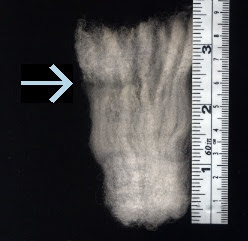 According to In Sheep's Clothing (my favorite and most reached for spinning book), this is caused by illness, trauma, or poor nutrition, all of which effect wool growth. It can be recognized by a thinness in the staple at the same place throughout the fleece. If I were to take firm hold at each end of such a staple and give it a snap, the weak tips would pull off.

My 50 gram fiber sample appears to contain mixed fleece; some of the staples are sound, as in the ones I used to evaluate the fleece, but others are not. For my purposes, the biggest drawback to this flaw is the amount of waste. 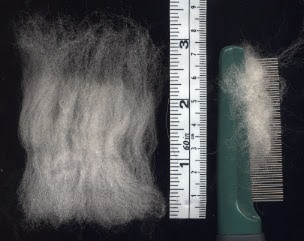 .....leaving the rest of the staple in spinnable condition. Woolcombs would accomplish the same thing, but had I wanted to drum card this and didn't remove the tips first, the short bits would remain in the batt and pill out of my yarn after it was worked up into a project.

This is definitely something to look for when considering a fleece for purchase. Ordinarily I would reject such a fleece, though not necessarily. It would depend on the breed, the color, the placement of the break. There would have to be some quality to make the fleece worth the extra effort and waste. And I would certainly expect to barter down the price!

My broken tips are about one inch in length, so I am going to save them and try blending them with another short fiber; perhaps with the cotton lint that I have in my stash, or some of the very short angora that I haven't have the heart to discard.

I also have some baby Suffolk fleece about the same length. It was a gift from a young 4-H'er who was very excited about raising his first lamb. Thanks to a very patient cooperative extension agent, he was allowed to try his hand at shearing for the first time too. Cameron proudly presented me his fleece (mostly 2nd, 3rd, and 4th cuts), so that I could "spin something" he said. His mom told me privately that the agent had said that it was too short to spin, but Cameron was not discouraged by this and wanted to give me the fleece anyway. Always ready to rise to a challenge myself, I promptly spun the the short fibers into a lovely oatmeal colored yarn and knitted Cameron a cap. When I gave it to him as a thank you gift, I told him to be sure and show it to that cooperative extension agent!

And so with my Bowmont, I will not be discouraged by the waste, but will enjoy the challenge of seeing what I can do with it. It's a scrumptious fiber and none of it should go to waste.

Next - comparing Bowmont to Shetland and Merino

Oh, how disappointing to have that beautiful fleece be flawed- have you gotten the shetland fleece to compare to it yet?

I hope that all the bad weather is skirting around you. Hi from all the critters and me! T.

I bought some Bowmont from Lesley last year, it was good quality but only 6 month cut, so very short. I carded it with angora - a good quality - and the result is excellent, in spite of the short woolfibers. Worth trying!

Informative, as always. Thanks for the tip.

Now I realise that some of my Bowmont also had weak tips - only a few locks - about the same length tip broke off as shown by your photos. I've got a box containing "leftovers" from fine combing my Bowmont - too good to waste, I may pick up on your idea and see if I can blend them with other short fibre.

How did the drum carding go? I tried fine cotton hand cards but had difficulty getting the neps out, so opted for a fine cat comb and a button diz. I'm getting a lovely fine yarn now. The advantage, I hope, of spinning fine is that the small amount of fibre produces a long length of yarn.

Thank you for the information. I have heard folks talk about this, but could not really envision it. Excellent presentation of the information and good pictures! It will help me be a more informed purchaser of fleece.