Sounds like a dance step. But, every fiber artist knows what I’m talking about when I quote those three often disliked words, “Sample, sample, sample.” That’s what I’ve been doing.

Now if one is basically an impatient person, like me, then the idea of sampling isn’t very appealing, whether it’s weaving, knitting, or spinning. However, it doesn’t take too many disasters before the wisdom of sampling is exquisitely revealed.

While I was weaving my log cabin scarves, I couldn’t help but think how much log cabin reminded me of shadow weave. Not that I have much experience, but I did make one shadow weave sample for a design board several years ago and have been intrigued ever since: 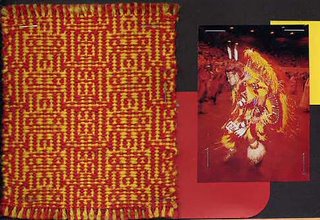 To begin my shadow weave study, I first dug out all the resources I could find, including the March/April ‘05 issue of Handwoven, 1000 (+) Pattern in 4, 6, and 8 Harness Shadow Weaves by Marian Powell, and Color-and-Weave II by Margaret Windeknecht.

As I read Madelyn van der Hoogt’s “Color-and-Weave Basics” article in Handwoven, I was surprised to learn that shadow weave was actually developed from warp rep drafts by Mary Meigs Atwater. (I would have loved to get a hold of some of her shadow weave articles, but those old 1942 issues of Shuttlecraft don’t seem to be widely available, not even on Handweaving.net, nor Ralph Griswold‘s Digital Weaving Archive.)

The technical definition for shadow weave? It’s essentially a plain weave structure, but the blocks follow a twill step sequence so that there are 2 thread overshots at the block edges. Light and dark threads alternate in both warp and weft. There seem to be no strict rules regarding threading and tie-up, as Atwater and Powell approached these differently but achieved identical interlacements.

So, samples are on the loom. Next - Shadow Weave Samples 1

Your sample shadow weave is lovely.

That sample is SO pretty! I don't know anything about weaving other than making those pot holders on a miniature loom when I was a child!

Thanks for visiting my blog; I'm enjoying reading yours. And I agree, it's WAY too hot to knit much of anything but socks in the summertime in the South!

I don't mind sampling so much any more. Maybe because I don't have to do much sampling now. I hope to get an 8 harness loom at some point and will have to start sampling again. Your shadow weave sample looks very good. And it is nice to be able to use it for something! I can't wait to see with what else you come up with!