With my log cabin yardage off the loom I am ready for a new weaving project. My first (second actually, the first was a disaster) attempt at warping back to front was successful, so I am ready to use it again. Two major reasons stand out in my mind:
So, I’ve been re-reading my resources and also the blog comments, many of which offered practical help as well as encouragement. I plan to follow the same steps as before (basically Deb Chandler’s one lease method), but pay attention to improving warp tension.

Actually the tension was pretty consistent and weaving went pretty well with my yardage until I got towards the end of 5 yards. At that point the sides were looser than the center of the warp. It didn’t effect the end result, but of course my question is, why? Did it have to do with how I tensioned the warp as I wound it on? Did I not tie my 2-stick heading onto the front apron rod evenly? (see Peggy Osterkamp’s Warping Your Loom & Tying On New Warps chapter 6.)

One thing I want to experiment with is weighting the warp as I wind it on. I have milk jugs filled with water in mind at the moment. And this time I will not cut and re-tie the header sticks again.

At any rate, with Rascal’s help (which he insisted on giving) I’ve begun preparing my warp. 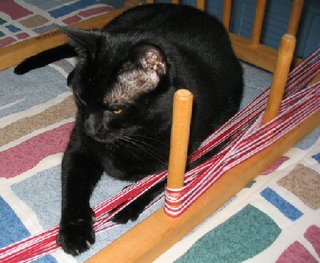 Related Posts:
f2b Versus b2f - Beginning of this series
b2f Log Cabin Weaving - finished fabric from this series
B2F Warping - Still Tweaking
B2F Vs. F2B - Why I Switched
Posted by Leigh at 2:26 PM

A fellow weaver and cat-lover - nice to meet you! The log cabin weaving is lovely.

I just read Rascal's blog and nearly spilled coffee all over the keyboard laughing at him.

I think the weights should definitely help. They do help my warps and they seem to help everybody else's who use them.
So, what is going on the loom this time?

Last time I dressed my loom I used weighs and a Trapeze. Not a real Trapeze but a modified version using the spool stand. See pictures at my blog. http://yorksett.blogspot.com/
Look in the archives December 25th entry. Hope this helps.