It didn't take me long to figure out that this skeleton tie-up......

.... (which I'd worked out here) wouldn't work with my countermarche loom. The problem? The way the treadles are tied up.

The above tie-up draft is for a rising shed loom like a jack loom. With this type of loom, the only shafts tied to the treadles are the ones which need to be lifted in order to weave a draft.

A countermarche loom on the other hand, creates a shed by lifting some shafts and lowering the rest. This requires all the shafts to be tied so that each shaft is activated (either up or down) for each shed. The above tie-up could be re-written for a countermarche tie-up, which uses X's and O's instead of shaft numbers.

Not so easy to read, is it? Which is why I prefer working with rising shed tie-up drafts, which are easy to mentally adapt for a countermarche (CM) loom. In fact, almost any rising shed draft can be used on a countermarche loom, except in the case of a tie-up like that skeleton above.

Why's that? Well, suppose a shed requires lifting shafts 1 and 3 together. According to the above CM tie-up, treadle 1 (1st column) is tied so that it raises shaft 1 (indicated by the O) and lowers shaft 3 (indicated by the X). Treadle 3 (3rd column) is the opposite. So, if I press both treadles together, they counteract each other and I get no shed because I can't raise and lower a shaft at the same time!

I wish I could tell you that I was clever enough to figure out the CM skeleton tie-up all by myself, but I'm not. It was Madelyn v.d. Hoogt to the rescue! On page 79 in her The Complete Book of Drafting for Handweavers, are 8-shaft skeleton tie-ups for both countermarche and jack looms.

The skeleton tie-up for an 8-shaft CM looks like this: 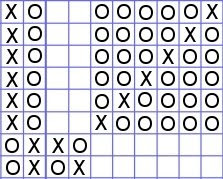 All in all, the footwork is a little awkward, but I'm gradually getting the hang of it. Between that and keeping track of two shuttles, it may be a bit slow going, but I've never been a lightning fast weaver anyway.

Are you familiar with Tim's Treadle Reducer? It works well for jack looms, but could be a starting point for the countermarche loom.

Valerie, thank you for mentioning that! Yes, I'm familiar with it, though I've never tried it. I meant to give a link for it in my first post on skeleton tie ups, but I forgot. I'll have to experiment with it for some S&W drafts for my CM.

Skeleton tie ups are fun! I have worked with one since I started Janet Philip's sample blanket. It's a 4 shaft skeleton tie up, but it enables 1-3, 3-1, 2-2 twills and plain weave. It could be doubled up to use 8 shafts, but no need.

I look forward to seeing what you can do with this 8 shaft tie up. How many treadles are you using together?

I learnt from the Weavecast Convergence episode that the computer dobby I could get from Toika for my loom could be used with Glimakra looms too - that gives loads of possiblities for using 8 shafts, but I'd miss the fun of selecting my pattern with the treadles.

Dorothy, at the moment I'm only using 9 treadles. This is because I originally planned on only 3 blocks because that was all I could have gotten with the rising shed skeleton tie-up. I see now however, that I could have made this a 4-block S&W. I'll do that with my next warp and use all 10 treadles.

I'll definitely have to try the skeleton tie up you have going at the moment, but don't mention a computer dobby for my Glimakra. I'm trying very hard to remember that I don't want a dobby loom. :)

Heh - interestingly, although I appear to have missed Dot's comment the first time around, I've just found it while researching Toika dobby mechanisms for Glimakra looms - after hearing about it on the Weavecast episode about Convergence!

Maybe in next winter's spending splurge...

What a simple solution! Thanks for explaining it, this might come in handy some day.