I haven't mentioned the Polwarth in about a month, but I have been busy with it. Since there was some concern about the tenderness of the fleece, I made sample yarns from five different preparations. 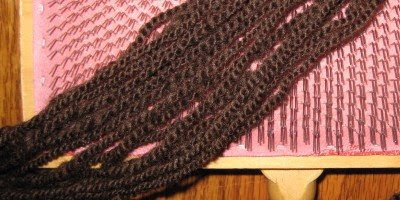 Handcarded - Actually, at five inches, the fleece was too long for handcarding. The best fleece length for handcards is no more than three inches, or the width of the cards. It's not that it can't be done, but the problem is that if the fleece on the cards isn't completely separated during carding, it gets folded back onto the cards. This makes it harder to get the individual fibers separated into a smooth preparation.

I was careful with my carding, and the rolags were a little neppy. These make it harder to control the yarn during spinning, so the yarn is a little lumpy. When I first learned to spin, I thought these lumps this added character to my yarn. Now I know that these become pills, which is something I don't want in my final product. 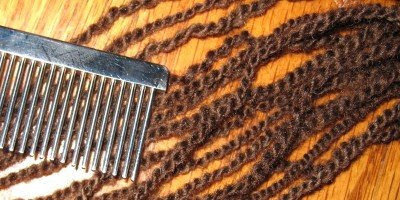 Dog Combed - This is one of my favorite ways to work with fleece. I comb both the tips and the butts of the staples to open them up. Then I hold the locks parallel in my hand and spin from on end until that lock is used up.

This preparation was much nicer, though there were still a few neps. 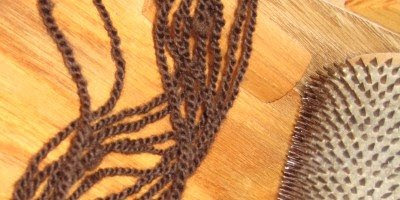 Drum Carded - I admit that this is usually my preparation method of choice. Mostly because it is the quickest. Also because it blends color variations well.

In terms of results, drum carding didn't do any better than handcarding. The neps were still there, so the yarn was lumpy. Fortunately though, I didn't get a lot of fiber breakage, which was my concern with the tender fleece. 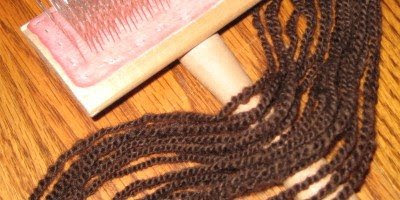 Flick Carded - This is my least favorite way to prepare fiber for spinning. I end up with busted knuckles every time! I flicked both ends of the staples and then drafted them into a roving. This spins very nicely.

This made a better preparation than the hand or drum carders as it got more of the short bits out. Still, I've already ruled this one out. 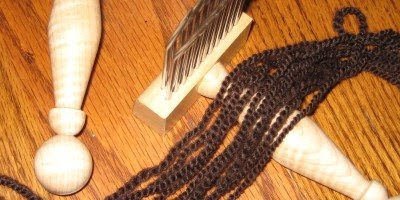 Wool Combed - I probably don't have the proper combs for this fleece, but I figured I'd give it a try with what I had anyway (Forsyth Minis).

This made a lovely preparation and the smoothest yarn. Wool combing gets all the neps and short bits out, so that it's easier to control the results and is a breeze to spin.

Before I choose a preparation method however, I need to decide what I want to do with the yarn. I have a whole fleece, so there is plenty for a large project. One thing I'm considering it is using the yarn for weaving. I rarely weave with my handspun. I'm also considering blending it with some of the alpaca I have leftover from last summer's spinning. If I do that, I will have to consider blending as part of my processing choice. That means I still have a little more experimenting to do. Obviously this isn't a project that will be completed anytime soon!

Related posts -
Adventures In Woolcombing
Next Spinning Project - Polwarth
Polwarth - Experimenting With Blends
Posted by Leigh at 12:11 AM

Oooo. This earn would be lovely woven. The sheen would really stand out.

Excellent information! Since I never really learned the "right" way to prep fiber, I'm always keen to learn how to use the tools I've collected. And the polworth looks amazing! Such crispness. The plying really stands out in each preparation.

Oh, and you know how I love stuff like this! I haven't been around for a while, but I'm all caught up on my blog-backlog now, and I'm back.. The combed stuff looks absolutely superb, but I have no idea how blending would work using combs. In fact, wouldn't it tend to separate them out again?? Inquiring minds want to know...

All the samples are gorgeous! Unfortunately we can't feel the samples so you'll have to decide which preparation method is the best. What a great shade of brown.

Which color alpaca will you be blending the Polwarth with, Leigh? I had an alpaca breeder stop by to get a few bags of alfalfa pellets from me for her pregnant alpacas. She had only been exposed to churro fleece before but when she saw how fine the shetland fleeces I have were said that she would now, again, consider blending alpaca with wool. I haven't tried it yet, but now you've got me thinking....

Ditto your experience. Polworth requires a fur cloth on the drum carder, and even though Paula Simmons warned me when I bought my carder that I would one day want one, I was adamant that I would never spin Rambouillet - can't stand it. She was right and I can't card fine wools. They do great on the Forsythe minis, but I'd rather be spinning than processing one teeny comb at a time. Stuff I can't do myself goes to Sherri McKelvy at Morro Fleeceworks. She has the magic wand.

Great information! I have only played around with my wool combs. It is such a long process (for me, at least.) Probably explains why most of my fleeces go to a processor.

Polwarth is still one of my most favorite wools to work with. You can drum card it with a fine enough cloth - if the fleece is not tender, I recommend "precarding" (dragging both ends of the lock across an upturned handcard) before laying the locks directly on the drum.