Do you remember this black weft sample from the rainbow warp? 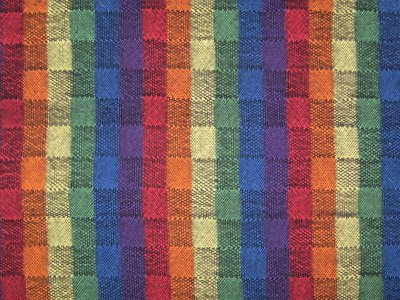 Like many of you, I usually prefer black for contrast, because it really seems to make the other colors pop out. But still, I wondered how it would look with white. Finally I couldn't stand it any longer. I just had to experiment with a white weft as well.

My rationale for tying on another rainbow warp was two-fold. One was to experiment with a white warp, but the other was to weave one more sample in the rainbow weft series of samples. I had already sampled wefts of purple, blue, green, yellow, and orange. But I forgot one with red. So I wanted that one to add to the others. I added a photo of it the original post showing all of them.

Here are the six rainbow samples together. They measure about 15 by 17 inches. I'm still thinking about making napkins, though they seem a tad heavy for that. 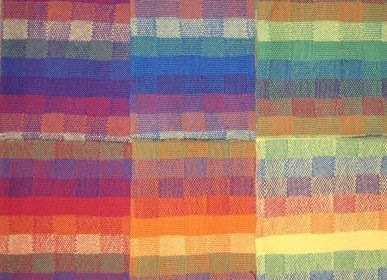 And here is a photo of the white weft sample. 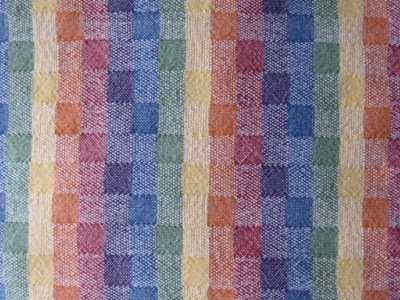 It doesn't have the 3-dimensional quality that the black weft one does, but I like it. More candy-like and whimsical in appearance.

With all that out of the way, I am now mentally free to resume the other multiple tabby weave ideas that I want to experiment with. In fact, I should finish tying on a small sample warp today.

Better with black. Love the colors.

You are better than I. No matter how much I like a project, I have yet to repeat a warp, mostly due to my short attention span. This explains why I am not a production weaver.

Picnic napkins might be good for this fabric, as they won't blow away so easily. Seriously.

I'm surprised how much I like the white. Softer looking? It worked, that's all I know.

I like them both, I think the black of course are more pronounced, but the white looks so, summery. I like the idea of picnic naps. Of course you could always make a knifty knitting project bag for the fair isle sweater.

This was really interesting, thanks for sharing! I think I'm in the black group, too, I like it when colors pop... Really like the idea of making them into a tote bag of some sort, that sounds great!

Thanks for sharing all the samples - I like them all. They just have different applications. The white would make a sweet jacket for my granddaughter.

The bright colours with white reminds me of the view outside our window several days in the last few weeks - spring flowers and snow!

I like them both. I agree with Sharon that the white weft would be great for a little girl's jacket or blanket.

Are you glad you did this? Silly question, of course you are. This way you can see where the white works best (in your opinion)and where the black works best. Very useful.

You just rock my little world! I love that you have so much interest in the experimentation with the "what if's" of different colour combination and structures. So many weave structures, so little time.

Took me awhile but after looking at all the samples many times I like the black. They are all colorful and I don't know about the rest of you but some times it depends on the mood I'm in the day I choose a color combination.