OK. I thought everything was going well. My first warp on this loom had been successful, so I had every reason to believe that this one would be even better. Winding on the warp on had gone well and I was ready for the next step: tying up the treadles.

I reviewed the Glimakra set-up video. I re-read Tying Up the Countermarche Loom. I borrowed a nifty idea from Dorothy..... 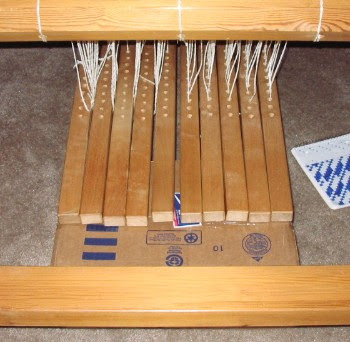 Happily, the tie up went much quicker than the first time. The first time took me all day. This time it only took about two hours.

Then I took out the locking pins. These hold the shafts in place while the loom is being warped, threaded, and tied up. This is the "Before" photo of the shafts before I took the pins out..... 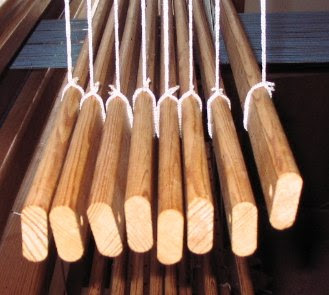 (Shaft number 8 is bowed and does ride higher.) 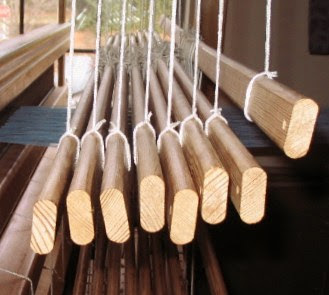 Notice anything different? They all (except #8) sank!!! They aren't supposed to do this! I couldn't believe it! This didn't happen the first time! I wanted to scream and pull my hair out. But instead, I reminded myself that I always learn more from my problems and mistakes, than from just happening to get a thing right. I was so frustrated at that point, that I decided to sleep on it and try again with a rested mind.

The next day I put the locking pins back in and shifted into problem solving mode. I started at the top of the loom and worked my way down, noting that the warp was centered in the heddle eyes, the upper lamms were slightly elevated at the open end, and that the lower lamms were parallel to the floor.

Next, I re-read Dorothy's "Treadles Again and A Few Inches Woven" post. This time I took notes so I could remember her rules for tying up the treadles and tried to think them through as I followed them. When I finished my adjustments, I held my breath and pulled out the locking pins again. This time they stayed. What a relief!

Next will be to weave about an inch or so of plain weave and then check and adjust the shed.

After that, I can actually start weaving!
Posted by Leigh at 2:03 PM

Ow. I'm cringing here. I'm going to get up and walk over to the wall and bang my head in your honor.
Ugh. What torture.

So do you think I can get my saddle blanket on and off of the loom in two days??? Keep your fingers crossed!

Okay, that was hard to read because I can't help but wonder how I would have handled it. Tie-ups are physically hard to get to and do. I mean, it was hard to clean my studio today so I'll enough room to weave. As an old Texas-born boss used to say, "I'm fixin' to get ready~" I'll be reading your log cabin section again before I wind my warp. Thanks for making those wonderful notes.

Oh goodness - watching the weaving come together is quite a gripping drama! The potential feline threat makes it all the juicier!

It will be super to see how it all works out.

Hi Leigh, I remember several of those moments where I felt like screaming! Going away from the situation and leaving it overnight always seems to help.

It's good that what works for getting my loom tied up might be working for yours as well.

You have much more patience than I - you must have to use a little "CCSI" once in a while to solve your problems, huh?

I've awarded you, Rascal & CatZee golden roses on my blog - stop by to see.

MEOWY CHRISTMAS to you and yours - hugs & scritches all around.

Just droppin' in to wish you a Merry Christmas, Leigh.