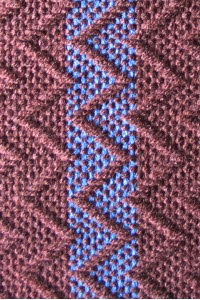 My second Christmas afghan is off the loom. Once I solved the mystery of why my twill zig zags weren't centered in the stripes of color, I immediately began planning the next project.

I did a lot of thinking while I wove the first afghan, and actually planned two, one based on my observations about the warp threading in regards to the zig zags, and one based on the comments from Ruby. From the detail on the left, you can see that the first of these two has been successful. To get this effect, I had to expand the color stripes to 10 warp ends, putting the first thread of blue on shaft 6, and the last one on shaft 7. My threading is a straight 1 through 8 and repeat.

I chose (hopefully) masculine colors for this afghan. The brown is actually darker than the photos. It is interesting to me that the surface of the weaving seems very textured, while the underside was smooth and flat while on the loom. However, the two sides pretty much evened out texture-wise, after the afghan was washed and dried. 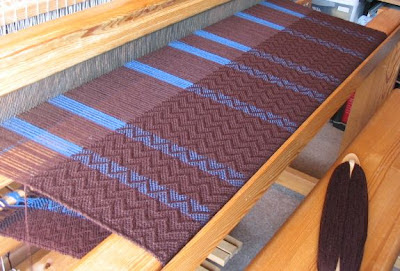 The blue stripes are spaced in an approximate Fibonacci sequence. Since I had to start and end the blue yarn on specific shafts, I didn't worry about getting the exact number of brown ends for the Fib count. The yarn is Red Heart knitting worsted, with a sett is 8 ends per inch. I have 354 ends.

Once I got over the excitement of seeing my design success, I have to admit that the weaving got boring pretty quickly. Brown is not one of my favorite colors, and with no color or design changes to entertain my eyes, I lost interest in the project pretty quickly. That in itself motivated me, as I wanted to get it off the loom quickly so I can get on to the next one.

However! I am very pleased to report that I had very good tension, no warp ends were skipped, the fell was straight, and best of all are the selvedges. They are the best I've ever woven, beautifully straight and even. These are things I've struggled with for over seven years, sometimes to the point of feeling defeated enough by them to think about giving up weaving. I am overjoyed that these problems were finally overcome with my third project on this loom. I don't know how well weaving the next afghan will go, but at least I know that I can do it.

The photo of the finished afghan below is closer to its "real" colors. 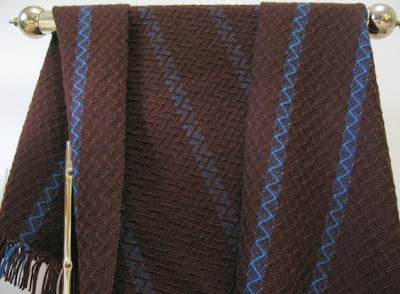 As you can see, I simply knotted the fringe to finish it off.

I have to say that I am impressed how nicely the Red Heart yarn softens with machine washing and drying. I have used it quite a bit for weaving, which is actually rather odd for me to do, as I am really quite a fiber purist. Most of my own clothing is all natural fibers (except for a few cotton/poly blend tee shirts), as are the things I make for myself or around the house. I would absolutely never knit or crochet a garment with Red Heart. But for weaving, I have found it an inexpensive way to experiment with color, especially since I make a lot of mistakes and have had quite a few design disasters. So if a project is a flop, acrylic yarns seem to cut my losses, especially considering that I have more time than money.

Another thing I find, is that by using an acrylic yarns I feel freer to give my handwovens away. I've often given one of my log cabin scarves as a thank you gift. Perhaps because acrylic is a good choice for recipients who may not understand natural fibers, or who prefer the easy-care of being able to toss it into the washer and dryer.

Well, enough rambling. I'm off to work out the details for Christmas afghan number three.
Posted by Leigh at 5:19 AM

I'm with you on the acrylics for gift-giving at times. Not everyone wants a garment or accessory that cannot be machine washed nor does everyone appreciate the benefits of natural fibers. I used some Jamie Baby Yarn for a simple rigid heddle woven piece as practice to see if weaving was for me. The verdict is still out on the loom ownership, but I was really quite pleased with the sample. Evenly woven, sturdy and softer than I expected!

Your afghan is lovely and will surely see a great deal of loving use!

Very nice. I agree on the acrylics for gifts. One too many bad experiences with things I have gifted.

wow, Leigh, that is one beautiful afghan! I am not the greatest fan of brown in clothing, but together with the blue this looks gorgeous for an afghan! you can always put me on your christmas list:))I'd take one of those any time!

Just having received Carol Strickler's "A Weaver's Book of 8-Shaft Patterns", I'm even the more impressed with your two afghans. Understanding leads to appreciation!!

I'm going to take another look at your "new loom" pictures to see if they show how the "cloth protector" is attached on the front of your loom. At least, I think that is the purpose of the thin board in the picture showing your latest creation. I'd like to know more about that.

I love the afghan! The stripes and twill go very well together, as do the brown and blue. How do you like weaving wider fabrics? I would love to get a wider loom but wonder if the stretch would get tiring.

I haven't woven with acrylic but I think that's a great idea. I'd certainly be willing to take more risks and be less hard on my mistakes. I have several cones that someone gave me and will take your suggestion to heart, making it my next project. Thanks!!

You know, today's acrylics, even Red Heart, are not what they were a few decades ago, some of them are actually quite pleasant. The afghan looks beautiful, nearly machine-made in it's precision.

I am sure the recipient will be THRILLED with it. I am still in awe of the complexity of your shaft designs. They must be a pain to tie up (I have no patience for threading looms, myself) but the final product always looks to be worth the effort.

LOVELY (and I am not a brown fan either, but it looks very nice with that blue)

That is lovely! What is the weaving width of your loom and of the blanket? The photo seems that the blanket goes on forever.

Good idea about using Red Heart. A few of my kids want blankets but I've hesitated to weave them wool blankets because I remember how they treat them. Is it all that cost effective?

How wonderful that the technical aspects of weaving have all come together for you. I told you you would love the CM loom..........!!!

I know all about the boredom of throwing the shuttle--though many seem to enjoy the hypnotic trance of it. That's one reason I love doing painted warps or warps where there are frequent changes of weft colors, size of blocks, etc.

I have to agree with you on acrylic. Sometimes, it's just the way to go.

Leigh, thanks for visiting my blog. I did check your previous posts about your new loom, but was not able to discern anything new about that wood piece in front of the woven cloth. That seems like a really good idea, especially with a wide weaving width. I would like to know more about how it is mounted to the loom.

The afghan looks great -- congratulations on working out the design. It helped me no end to know you have been working on your weaving skills for 7 years -- I keep reminding myself what a newbie I am. I also really appreciated hearing that you found the actual weaving a bit boring. I have discovered I like the warp part more than the actual weaving. No meditative response to throwing the shuttle at all for me!

That is awesome, Leigh! I *love* it, even if it was boring to work on.

I don't know how I got to your blog probably from someone else's list, but I have to say that the ghan is gorgeous. The pattern is really nice. I'm a real fresh newbie weaver, I have a tri loom and just got a table kid's loom to practice and am inspired by your work I love your blog, it totally rocks.

What a lovely afghan!! I use acrylics for afghans and kids items myself. Gifts too. They definitely have their place. Your blog has inspired me to begin weaving on a rigid heddle loom. Small investment, just to see if I like it.

Love the bown and blue!! I've also started using some arcylics for blankets especially for those who don't have the time to take the special care they may require.
Thanks so much for the tips on setting the warp so the "V" is centered.