Ever since I switched from front to back, to back to front warping, I've been enjoying weaving a lot more. Even though I learned to weave 7 years ago, it has only been for the past year that I've had the time to really apply myself to it. I feel as though I spent 6 years dabbling and at last have the opportunity to become serious about it.

Each time I put on a new warp I look for ways to improve it. I realize that there are a lot of different ways to accomplish the same things, it's a matter of finding what works best for oneself and one's loom.

The question on my mind lately has been whether or not to leave the raddle in while weaving. I had been taking it out, but found some decided advantages to leaving it in; the first being a way to keep the lease sticks from creeping toward the heddles. The first time I tried this, I tied the lease sticks together but found there wasn't enough give in the warp and several ends broke. The idea to use the rings isn't actually my own, I borrowed it from Charleen, which she uses during warping, and I thought to use during weaving. This worked better and allowed some give in my warp. No more bound and broken ends!

Everything was going well, or so I thought, until I read an Online discussion concerning where the warp passes through the heddle eye. It should be through the center, right? So I took a look and was alarmed when I discovered that it wasn't...... 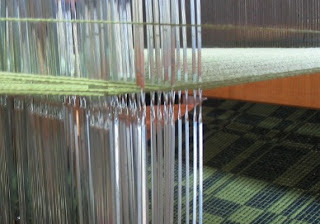 Speaking of floating selvedges, after a lot of experimenting, I have finally decided that I like to hang them off the back of the loom in a weighted film canister.

I've tried winding them on with the rest of my warp, but hanging them separately seems to work better for me. Especially as I often need a little give to them when I throw the shuttle and miss one of them somehow.

I use fishing weights inside the canister, and have discovered that these, with the help of a bent paper clip, are also good for the occasional loose warp thread .....

My other tweak involves measuring my progress. This worked better than simply measuring every time I advanced the warp and marking my place with a bit of thread, but this ..... 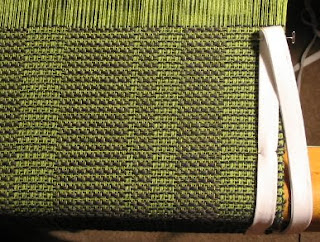 ..... works even better. It was Peg's suggestion; bias tape with marks I made on it (which you can't see). I pin it as I advance the warp, and unpin it before it winds onto the cloth beam. I had heard of using a cloth quilters tape measure, but never could find one. It hadn't occurred to me to make my own, so I appreciate this idea.

All in all, I feel like I'm making good progress; my weaving looks better and I'm enjoying it more. Maybe I'll make it past the novice stage one of these days after all.

I'd like some clarification on the bias tape measurer because I'd like to use it myself. I'd also like it if you'd blog about why you now prefer back to front. I belong to two local guilds and they are divided into two camps, back-to-front and vice versa. I learned BTF and somehow got switched to FTB and can't imagine doing it the way, but I'm open. I feel like it's like religion - some speak in tongues and don't like those who don't!

You're now using a heavy box to weight the warp while winding on. Why the change from jugs to a box? I know there is no more fiddling with each jug...but it was such a great idea and one I "stole" from you, with some adaptation.
My warp path is not straight from beam to beam, but with a dip at the heddles. Isn't that indicative of many jack looms?

Sharon, I will work on a post regarding your questions. I appreciate the feedback and ideas to blog about.

Marie, I'm still using the milk jugs. Not sure what I said to make it seem as though I changed to a box for warpingm(???) Thanks for the comment about jack looms, I will look into this!

Jack looms should have the warp dip as you describe. The warp needs to be suppressed slightly, so that when the shafts are raised, the threads don't snap.

If you think about it, on a tightly tensioned warp, with all the threads going straight through, if you raised a shaft those threads would tighten even more, pull on the threads, and the tension would eventually go wonky.

Counterbalance and countermarche have all threads moving, either up or down, so they remain at the same tension. Jack only moves the threads on that shaft.

Hope this is not too confusing!

Hi Leigh! Thanks for these posts - I love seeing how other people do it and it's kind of reassuring to see you working through questions about warping. I learned to warp back to front and have never tried front to back. I've also deviated very little from the method first taught to me. I love the ring idea for the lease sticks - I'm going to have to try that. Are you saying that you leave the lease sticks in while you weave? I hadn't tried that - do you know what the reason for leaving them in is? By the way - I second the comment someone else made on your earlier post about using something to raise up the shafts (I use books) - it makes it SO much easier to thread and sley the reed!

Leigh
Your photos are beautiful. I can't get enough of weaving in progress. I have never really thoroughly ironed out the warping process, so I'm always slightly irritated by my lack of productivity in this. But it also seems that warps of different fibres prefer variations in what I do. I particularly like Charleen's idea of the rings to keep the lease sticks together. I've heard that many weavers leave them in, but somehow they annoy me and I always pull them out, but usually leave the raddle in place. I also use thin stainless steel rods for my lease sticks which can be tied together with simple elastic bands. Who would have thought there are so many ways to warp a loom.
Kaz

Hi Leigh, the more I weave the more I realise that getting the warp set up right is the key to a good result. It seems to me that with all looms being a bit different you have to get to know your own loom and be your own expert.

I find the picture of your lease rods and raddle very helpful. I'd been getting round to the idea that I needed a rigid support for the lease rods. Where did you find those useful rings?

The bias tape idea is definitely one I shall try.

I didn't suggest bias tape buy twill tape, the kind tailors use in making jackets. Bias tape will stretch.......(grin!) Twill tape will definitely NOT stretch!
I keep lease sticks in, tied to each other, and have not had your problem. I wind the warp on the beam with the lease sticks in, but then they are separated. At that point they will stick otherwise. But once that is all done, the warp seems to do fine with them tied together.

Good post reading, Leigh. Yep, I'm a fan of back-to-front, but then again that's what was taught to me here in Ireland and don't know any other way! I never thought of hanging the floating selvedge separately, but will have to give it a try. Also the bias (yes, I know...twill) tape is a great solution to the measure at every advance method! And I really liked the ring between the lease sticks...so many good tweaks! Wow! So many helpful hints in one go!

Not a weaver at all, but the photos are great and I love the colours.