Having four Angora rabbits gave me the opportunity to experiment with the different types of raw fiber. The wool can be bought commercially in either the raw form (right off the bunny) or as prepared tops. Raw Angora fiber is usually available in two forms: plucked or clipped. Which is better depends upon whom you ask. 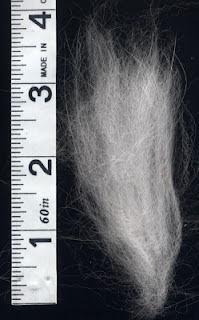 As you can see in the photo on the left, plucked angora is nice and neat.Plucking is the easiest way to sort the fibers by quality and length. It is also the most time consuming method of harvesting angora, and not all bunnies like it. It is the most expensive form of raw Angora to buy (or the most profitable to sell.)

In the beginning I tried plucking, but since I wasn't interested in trying to sell my Angora, and because my bunnies didn't like being plucked, I settled on a combination of combing and clipping my Angoras instead.

I would always start by combing out all the loose fibers. Combed Angora can be semi-orderly. 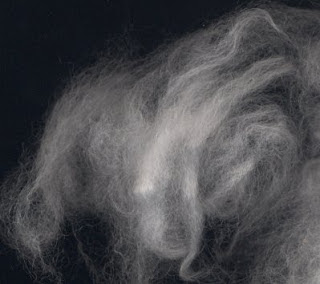 I found that if I was careful I could keep the combed fibers parallel and neat. For the most part however, I didn't worry about neatness.

Clipping is fastest way to get all the fiber off the rabbit, so that is usually what I did. After I had combed out as much loose fiber as possible, I would clip the rest. 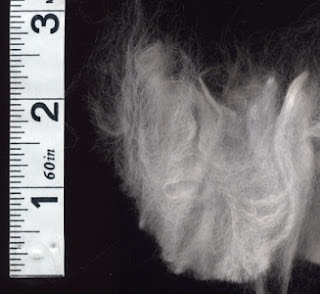 The biggest disadvantage to clipping is second cuts and matts, which are cut along with the good, spinnable fiber. Some believe that the blunt cut ends sacrifice some of the softness of the yarn, I can't say that I ever noticed a difference.

Since my Angora was mostly for personal use, I did not make any attempt to sort and grade it. I kept combings separate from clippings and discarded anything that was soiled, matted, or too short. 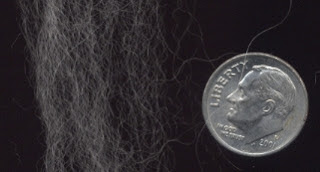 Angora fibers are exceptionally fine, measuring 13 microns or less in diameter. While the down fibers are crimpy, they are much smoother than other types of wool. It is this smoothness which accounts for both its softness and difficulty to spin.

Of the two types of Angoras I had, French and English, the French wool contained the most amount of guard hair. The guard hair is straighter than the down, but not stiff like guard hair in other types of fiber animals. Angora guard hair is not removed before spinning.

I need to do a better job of blending it with other fibers on my drum carder. It looks great when blended but I'm flying by the seat of my pants when I do it.

Great fiber photo's of the angora. Sadly, I am terribly allergic to the bunnies. I notice you keep speaking of your bunnies in the past tense?

Leigh...I have heard that if you place Angora fibers (or garments you want to wear) in the freezer for a bit, there won't be so much fly-away fibers when you spin or fibers flying off on your husband's good sportcoat if you do the garment thing. Could that be true?
Somewhere I have some lavender Angora...you have inspired me to get it out and try spinning it! Thanks!
(BTW...I did get both the Huck weaving and Twill books Weaver's produced. How inspiring! Thanks for the kick in the butt to get me going again. I'm just waiting for a new tension box to come for the Mighty Wolf to get going.) :)

Christ In Me said...

If the rabbit is carefully clipped on a regular basis and never plucked at all, there will be almost no short fiber in there. By plucking sometimes and shearing sometimes that is what causes the shorter fibers to be in the harvest.

Also on plucked fiber, over time guard hair will become stiffer (perhaps not as stiff as other animals, but definitely changes texture) and the down will tend to diminish in quantity so that the animal appears darker (from guard hair). IMO, this is not desirable and one reason I only clip, never pluck.

I don't seem to get much flyaway, but I spun directly from my bag of clipped angora, seldom carding it.

I plucking my angora.