The Cheviot tops from Judy was next on my list of things to do. When I pulled it out and took a close look at it, I was surprised to find that it contained a mixture of fibers. It was mostly very soft, but had quite a few smooth, black or white hairlike fibers, as well as kinky, stiff, kempy fibers of black or white. 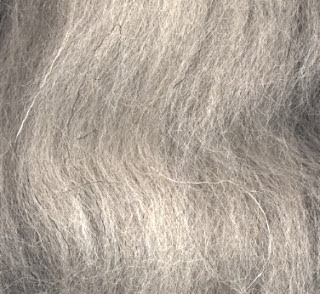 I pulled the tops into foot long sections, and split them lengthwise to spin. It took longer to spin than the Massam, because I found myself picking as much of the kemp out as I could with a pair of tweezers.

The color was labeled 'light grey' though actually this was due more to the salt and pepper effect of the soft white fibers and the black hair fibers. I don't think this is very visible from the above scan, but you get an idea of it in the singles yarn on the left. Overall, the color of the yarn is lovely.

In the inconsistencies of my spinning, I can see that lower twist would have been a better choice for this fiber, as the sections with less twist are indeed the softest. Even so it would never be suitable for next to skin wear.

According to Nola Fournier and Jane Fournier in In Sheep's Clothing, Cheviot is classified as a down-type wool, though I would never have guessed this from working with it. It is most commonly used for Tweeds, blankets, knitwear, socks and carpets. 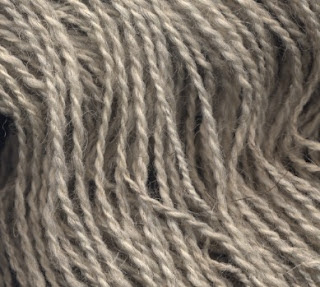 For the time being, I'm going to add mine to my handspun yarn collection. Perhaps once I have enough, a project featuring British wools will be in order in the future.
Posted by Leigh at 8:47 PM

Email ThisBlogThis!Share to TwitterShare to FacebookShare to Pinterest
Labels: spinning

Okay, your spinning scares me. I don't know the ratio of my wheel and never know what I've got until I put in the McMorran yarn balance. I spin my beautiful Shetlands boys to be the same - they look like your stuff on right - and then I calculate now much it takes to make something - more or less. I wish I understood all the mathy parts - but I don't. So I add color.

Hmmm, cheviot should be a bit less kempy than that, it must be because it's a grey one. White is always finer.

I'm not a computing engineer, but I am a medical electronics engineer :-). Textiles were hobby then work a few years back. I still sell a few designs each year to the company that employed me then. Strangely enough I have met a lot of engineers who are also fibre people.

What inconsistancies in your spinning, Leigh? :) Your spinning is beautiful!
I agree with "The Scot" in that Cheviot is usually much less kempy - but as Judy mentions, it must be because it is a beautiful grey fleece and not white.
I am glad to see another spinner of fine yarns. I always have problems spinning fatter ones and end up plying more than my normal two-plies if need be.
I am not a knitter, but am trying to learn..and I'm all thumbs. I really appreciate your work!

I do love seeing the yarn that you spin - Wish you were closer so I could peek over your shoulder :-) Tina

Leigh - Your spinning is beautiful! Of course the more loosely spun will always be softer, but then you get into the wear and pilling issues. I've never seen Cheviot that looks anything like this. It usually has much more crimp, and the white wool bits would be whiter than creamier colored. As usual, you're doing a great job, and are setting the bar in quality! Marty Mc