I like the idea of a day of rest. Not 'rest' as in doing nothing. But 'rest' as in taking a break from one's normal pursuits and activities. So yesterday I abandoned all my unfinished works in progress, and indulged myself in sampling some new things.

One thing I tried was a new crochet technique. The Online Guild is doing a crochet workshop this month, and though I've not participated much, the photos of what everyone is doing were too irresistable to not try myself.

This swatch is done in weaving crochet: 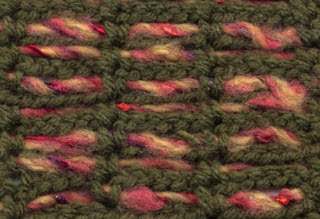 It's a lovely way to show off a novelty yarn. The green is Red Heart and the novelty yarn is Yarn Bee's Icelandic Jewels. I can see quite a few possibilites by varying the 'windows'. 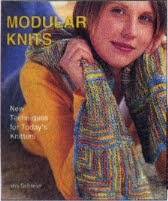 I also have been wanting to try some modular knitting. I got Modular Knits by Iris Schreier awhile back. I first dabbled with it a couple of weeks ago, but decided to really focus on the first couple of exercises in the book yesterday. I had several false starts, which was beginning to get a little frustrating because I couldn't 'see' what was happening. So I couldn't simply unknit a mistake, because I wasn't sure where exactly I was in the process. After several disgarded swatches, I eventually developed a rhythm and it began to get easier.

Here is my vertical and horizontal side squares swatch. 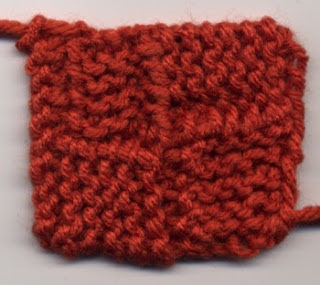 And here is my alternating squares swatch. 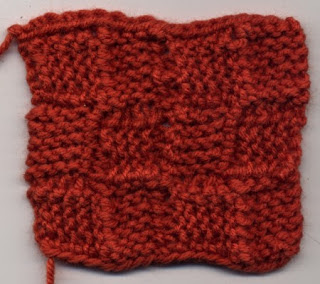 A little cattywampus, but looking better than my first tries.

These were fun to do and I will have to experiment more at a later date. Today it's back to sleeve knitting for my Rare Breed Sweater and finishing sleying the reed on my loom. Even though my change of pace still involved yarn, it is refreshing to try something new. It gives me a renewed appreciation for the projects I am working on, and the motivation to get them done so that I can look forward to new ideas to work on.
Posted by Leigh at 12:17 AM

I've been wanting to try out some modular knitting as well! Perhaps I'll start with a swatch, good idea! Thank you for commenting on my blog. I am using 8/2 unmerc cotton, and slowly but surely getting it on my loom. My belly still fits when I sit and thread, yay!

I'll have to take a look at modular knitting. I don't seem to wear any of the sweaters I've made but I can't imagine not knitting. Thanks for the suggestion.

I had a hard time establishing a rhythm to IS's method. I understand the process, but my brain doesn't GET it, so it feels finicky to me.

Good going on the Breed sweater. Did you see the Overlay crochet book that just came out? (I scanned it last night. There's a photo on my blog.)