I feel like I’m finally getting somewhere! My warp is finally sleyed, all 864 ends of it.

So far I’m thoroughly sold on warping back to front. Threading the heddles was much, much easier and so was sleying the reed. Although it was a little confusing at first to figure out the order of my ends, since the cross was on lease sticks, I’ve had much less difficulty keeping everything in order. 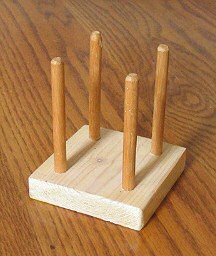 When warping front to back, I would hold the cross either in my hand or in a one of those homemade things pictured at left, (which I’m sure has a name but I don’t have a clue as to what that name is. I would tie it to my breast beam to hold the cross while I sleyed the reed.) However, it didn't matter which way I held the cross, fine or slippery warp ends could slide around or slip down, and I would often have trouble figuring out which one was next.

In warping b2f, the cross is on lease sticks, which not only keep the warp in strict order, but also enabled me to walk away as necessary. I could come back and pick up where I left off with no problem.

My draft is a log cabin variation which I worked out on WinWeave. I found one log cabin variation in Helene Bress’s The Weaving Book. However, when I worked up its drawdown on WinWeave I wasn’t satisfied with it and began doodling. Eventually I came up with one I liked and am using it. The treadling will be tromp as writ (aka as drawn in. IOW it is treadled the same way it is threaded.) Since the colors alternate across the warp, I was able to measure the two colors together. I only had to take care that I was threading in the correct color order. I have checked, checked, and double-checked, so hopefully I got it right.

See, that's the smart thing to do - try it out on WinWeave. If I would have done that I would have found my mistake.

If you ever want to do F2B again you can still use lease sticks to control the lease. See the technique I learned here: http://www.fibernut.com/warp/pages/warp3.htm

Your in the home stretch! 864 ends does take a lot of time to get through. My blanket was 540 and I thought that I would never get to weave. It felt like I was going to be sleying forever. But, as with a lot of things, the more you do it the quicker it becomes and the easier it gets. I am also a b2f kind a gal. I can't wait to see your weaving progress!