The Western North Carolina Fibers/Handweavers Guild had its annual guild retreat today. The turnout wasn't large, but that only seemed to make the event all the more cozy and intimate.

It was a rainy, gloomy day, 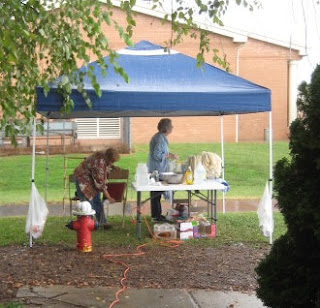 but that didn't dampen anyones spirits for kool aide dyeing. 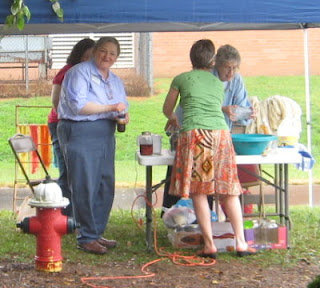 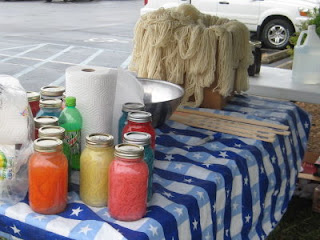 Two looms were set up for working on baby blankets for Project Linus. 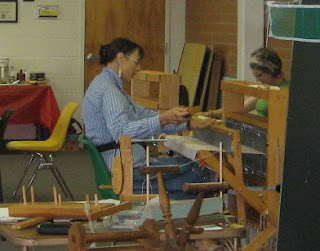 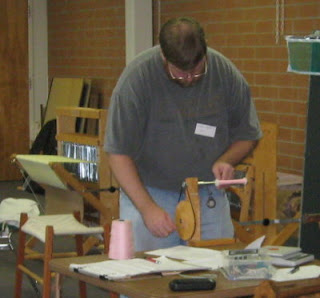 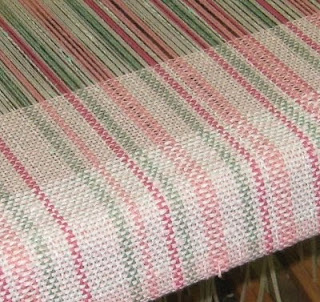 The spinning circle offered a time to visit and chat. 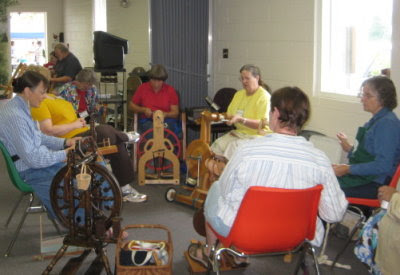 That's my Kromski Minstrel in the lower left corner.  I actually made some progress on my pol-paca! I can't believe I first blogged about it almost two years ago. Most of the yarn I've already spun is still packed away from our move. 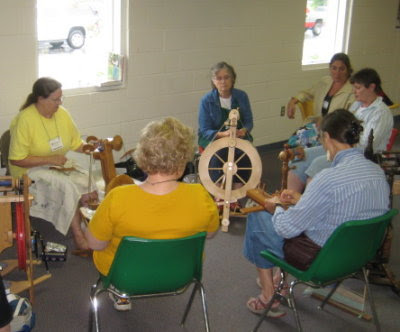 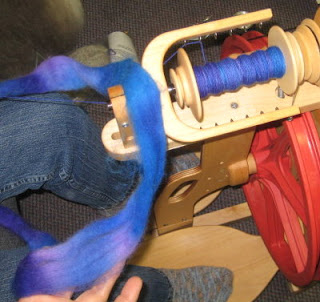 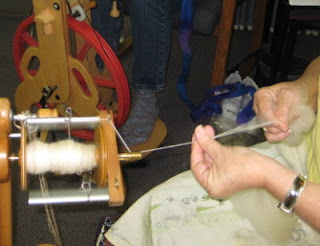 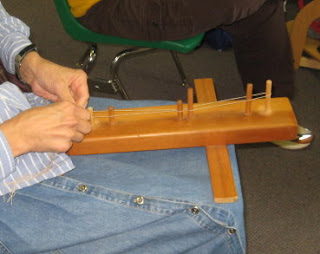 Teena joined the circle while working on heddle making. 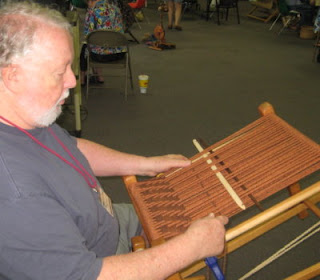 Walt brought his work with him, one of his custom benches with woven seat. You can see another one here. 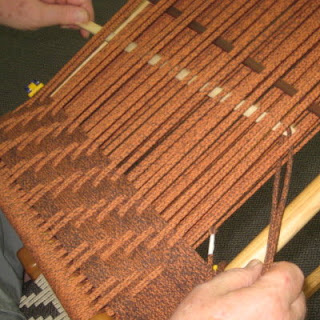 The other fun thing we did was to weave our name draft. 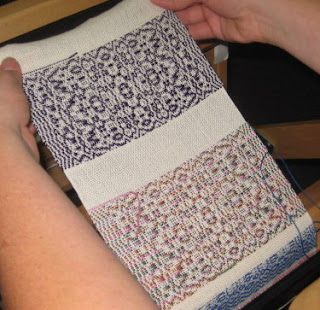 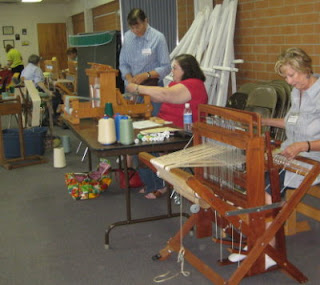 We learned how to draft our own names for the treadling. 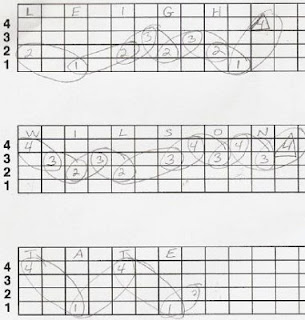 I was familiar with the concept, but had never actually woven a name draft before.  Each letter of the alphabet is assigned a shaft number.  We learned how to add shaft numbers in between duplicates.  For example, with my first name (above top), the L, I, G, and H are all assigned to shaft 2.  By adding shaft number 3 between adjacent 2s, I had a weavable draft.

Neighboring shaft numbers were circled in pairs, and the pairs counted to determine the treadling sequence.  Since it is overshot, tabbies were thrown in between each pattern weft. My treadling, without the tabbies, was: 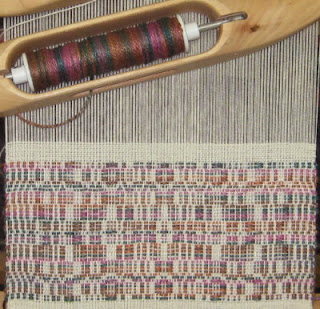 Here's my name treadled forward and reverse on the Guild name threading.  As you can see, I chose a space dyed yarn. 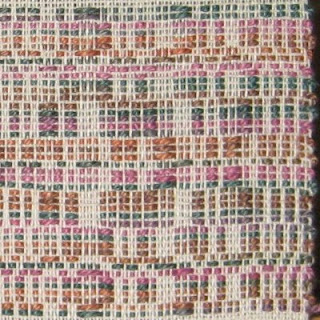 Here's a close-up.  It's been almost a year and a half since I've woven anything. When I sat down at the loom I wondered if I'd even remember how!  But it was as though I'd never taken a break. 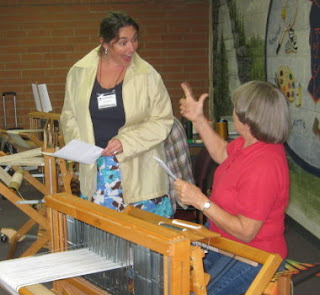 We really had a lot of fun.

Leigh,
I once had a hiatus of about 7 years while the kids were younger and I began working full time. When I got back to weaving it seemed that it all must have been stewing in my brain all that time, because I seemed to understand more than before.
Hope that's how it is for you.
Teena Tuenge

Currently both of my looms are holding other stuff up. One is in the kitchen/dining room - I removed the table, since all I did was pile stuff on it, and put the 45" loom in its place. Ok, so I don't have anything on it yet, but I have plans!!

I love doing name drafts! But I learned a different way - you write out the shafts across the top, and fill in the alphabet underneath, then fill in the blanks with the appropriate alternate shaft. I understand that you were working with a pre-threaded loom, so were limited, but they are pretty cool. I liked your space-dyed pattern yarn!

Teena, 7 years is longer than I hope happens to me. Still, your comment is encouraging. I admit that this has motivated me a bit. All I have to do is uncover the loom and find everything that goes with it. :)

Laura, one of the handouts we received showed 4 different methods. Of course, they were for 4 shafts, but the method you describe could be for any number of shafts. I'm not sure what method was used for the Guild's name. If I'd had more time, I could have tried out all 4 systems to see which results I liked best!

Walt! - what a surprise to see him on your blog. I ordered a bench from him three years ago at MD Sheep and Wool and when it arrived I was so pleased. I have a bad back and had trouble sitting and weaving, but not with Walt's bench. I wish everyone could have one of his benches. Mine is so beautiful, I show it to everyone who stops by.
Sometimes I just sit on it for no reason other than it is so comfortable.
Because I finally have something comfortable to sit on I now weave more.
Charlotte

Charlotte, yes, Walt and his lovely wife Ellen are members of our guild. In fact Ellen organized the retreat and taught the name drafting. They brought a couple of their own looms and also some of Walt's benches. You're right, they are supremely comfortable!

Looks like a wonderful active day with a terrific group of people!

Nice to see what your name looks like in cloth!