Behind the Scenes: BRFS Judging

We're in the final countdown to the opening of the Blue Ridge Fiber Show! The Western North Carolina Fibers/Handweavers Guild BRFS committee has worked hard for two years to make this happen. As Guild president, I had the opportunity to preview the entries and get a behind the scenes peek at judging. 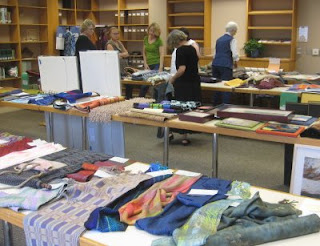 The 2011 show is being held at the North Carolina Arboretum. It will hang in the gallery of their Education Center from October 2 through November 28. This venue offers participants a much wider audience than in the past and we are delighted with this partnership with the Arboretum. Judging for the show took place in the Education Center library. 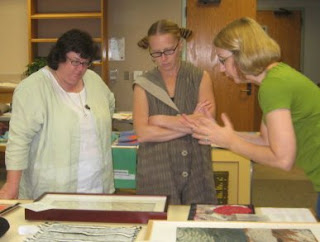 This year we have three outstanding judges: (from left) Tina Feir for handspinning; Lisa Klakulak for felting, and Daryl Lancaster for weaving. 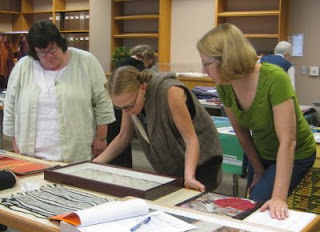 They collaborated on quite a few awards, and it was so interesting to hear their discussions on several of the pieces. 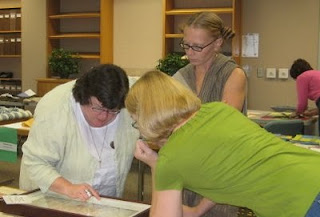 Judging for handspinning and felting reflects the first expansion of the Show since its conception.  Prior to 2011, it was known as the Blue Ridge Handweaving Show, and focused solely on weaving.  This year the name was changed to the Blue Ridge Fiber Show, reflecting the commitment to include a broader range of fiber arts. 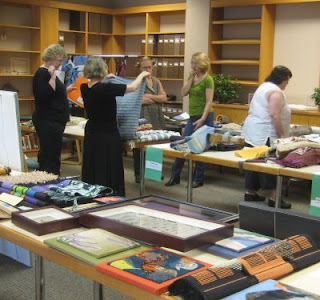 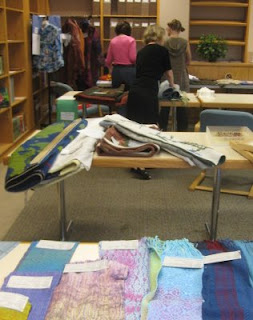 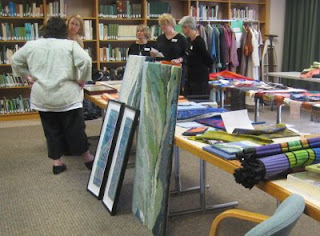 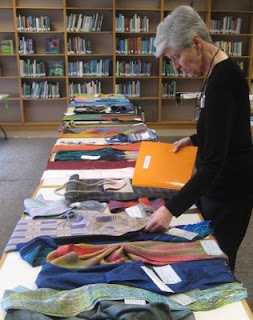 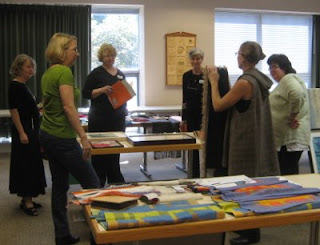 The prize winning pieces were then taken to be photographed by Larry Crabtree. Guild members on hand to help with photography were Nancy Crabtree, Mary Nichols, Eileen Hallman, Sharon Horne, Lynda Feldman, and Bonnie Kelly. 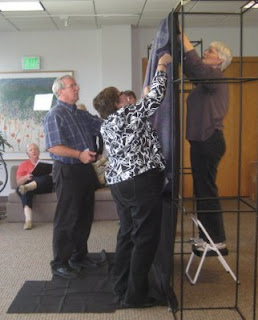 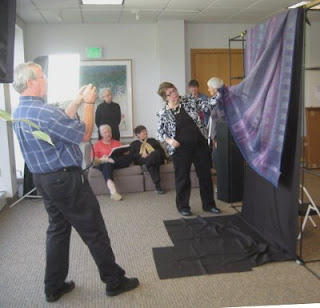 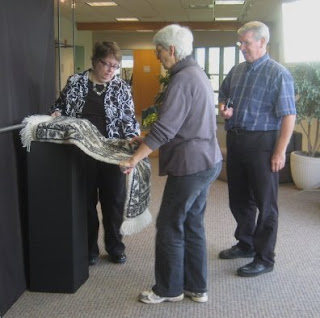 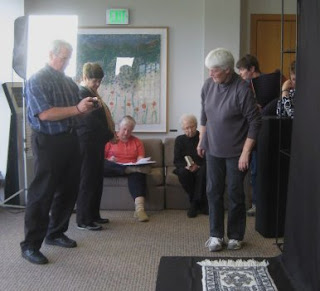 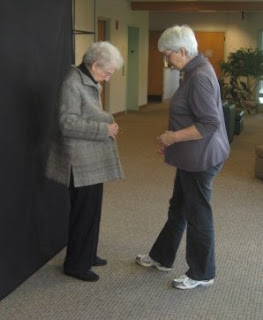 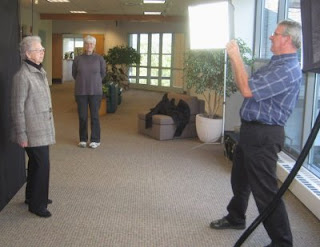 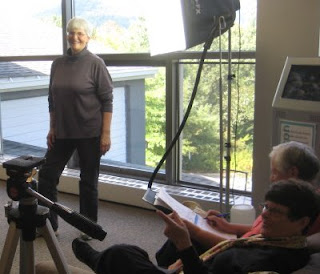 If you're going to be in the Asheville area on Tuesday, October 5, do come to the show's opening reception. It will be held from 2 to 5 at the Education Center. That particular Tuesday is the Arboretum's free day, so it would be a great day to visit the many gardens there as well. I will be there, so please come introduce yourself.  I'd love to meet some of my readers!

If you can't make it for the opening, do come by another day. The Guild will be holding weaving, spinning, and felting demonstrations at the Arboretum for the duration of the show.

If you can't visit at all, the Blue Ridge Fiber Show website will have photos and more information soon.

If you entered something, let me know and I'll be sure to get a photo or two of your piece(s) at the opening reception. I'll be happy to email them to you and post them on my blog as well.

Behind the Scenes: BRFS Judging © September 2010 by Leigh at Leigh's Fiber Journal
Posted by Leigh at 12:35 PM

That is a huge event and I can see that it is fabulous as well. How wonderful for you to be in that rich fiber environment.

I'd love to see some pix of the winners, esp. one of the "purple hanging" (don't know if it's a wall hanging or a blanket....) I don't envy judges at these shows, I would find it extremely difficult to make a decision about these pieces!
have fun on the day!

Sharon, for me it was really inspiring. Made me want to warp my loom! The sad thing is that for every show (every 2 years), I say I'm going to enter but I never do.

Bettina, judging was a daunting task. As Guild president, I had the honor of choosing the "President's Choice" award, based on best use of natural dyes. After looking at the entries that qualified, I had to think about it for a long time. Eventually I deferred the decision until after lunch. I decided I didn't want to double award them, and would wait to see what the judges did.

After lunch, Charlene, our judging coordinator said the judges wanted to confer with me. They didn't realize I was to pick this one, and already had a piece in mind, which they wanted to recommend. Turns out it was the exact piece I had decided on during lunch. That certainly made it a whole lot easier!

Theresa, we had some absolute knock-outs entered! Beautiful work. I'll take more pix at the Opening Reception and post those here. Our photographer will be getting shots of all the entries, to post on the BRFS website. That will be a bit down the road, but I'll take requests and put up as many as I can.

What an honor to be able to view all thse wonderful pieces of fiber art!!!! I can't wait to see the pictures of all the winners.

Barb, I hope you and others will consider entering the 2012 show. It's one of the few shows that accepts all entries. Many other shows require being juried in to. This one is a way for all spinners and weavers to be recognized and participate.