When I first started working on my Shetland Sampler Cardigan, I referred to it as "Fair Isle." I did this mostly because the chart I'm using is for the "Dyepot Fairisle Sweater" from Anne Field's The Ashford Book of Spinning.

Since then, I've been reading about Fair Isle, and discovered that not all 2-color stranded knitting is actually Fair Isle. I'll tell you what I've learned so far.

Fair Isle Knitting
So technically, my Shetland Sampler Cardigan doesn't qualify as Fair Isle. Which doesn't mean I like it any less; I just feel more technically correct about it. :)

I've knit a few more inches on the Siamese sleeves, but am now very much distracted by the adjacent black and brown rows near the top. 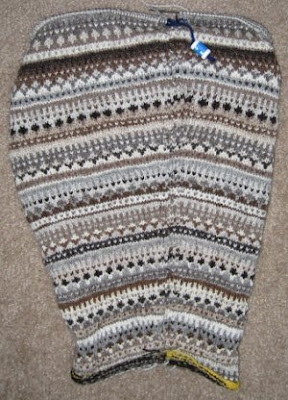 They are just too dark together and keep pulling at the eye.

DH says it looks okay to him and to just keep going. I tried that for another inch or so, but now I just can't stand it.

Related Posts:
What I Learned From My Swatch - Calculating yardage for individual FI color patterns
Posted by Leigh at 12:30 AM

What the heck. Call it what you want it's still great.

I hate to say it and, god knows I couldn't do it, but you are right about the dark bands. The eye really is drawn to it. And, on something so lovely, you really do deserve to have it be just what you want it to be.

But, I'm still wincing just a bit at the thought of the frogging.

I always learn something when I read you! Thanks for that information about what qualifies Fair Isle...so interesting!

And for what it's worth...I rather like the bold stripe at the top of the sleeves...it is a nice contrast and a place for my eyes to rest.

Yep, the dark bands look like dark stripes. One of those things you don't guess before you see it... the more I knit the more I understand that good knitting is about having the courage to un-do and try again.

Otherwise, the sleeves look great, are you getting near the top (give or take the dark bands)? Knit on, I'm enjoying watching ;)

It's funny how subjective this is. In some ways, I can see the desirability of a focal point. However, this isn't what I've been picturing in my mind! Even though I'm knitting a specific pattern, my color use is pretty serendipitous. Dorothy, as you say, it's something that can't always be predicted!

Yes, I'm pretty close to the top, only a few more inches to go. After that, I'll go back to the body of the sweater and finish the last quarter of knitting. Beyond that, my brain doesn't function :)

Yeah, my eye was pulled to the dark band at the top but just the same, the sleeves are spectacular. Leave the bands - then it will be clear that they weren't machine knitted. Your work is so perfect, that mistake could be made. I tend to knit in one piece, but by the end, it's an awfully big piece!

I think it looks great and you shouldn't worry about it. But this is coming from a person that has taken a whole sweater apart and started over because I didn't like the way it fit.

I agree with you on the dark rows -- they seem just a bit heavy when compared to the rest of the design. I think they' be great if they were down by the cuffs as an accent, though.

As always, your knitting is just superbly lovely. Wonderful!

PS -- Hey Leigh, I thought you might find interesting atutorial that I did about 9 or so years ago for my sock knitting list that shows my twist on corrugated ribbing.

I called them my catapillar cuffs.

I am equally guilty of calling all sorts of knitting "Fair Isle" when it doesn't technically qualify. But I haven't been arrested yet.

The sleeves look gorgeous. Even if you have to frog a bit, it's worth the trouble for such a splendid sweater.

While I see what you mean about the dark stripe, if you hadn't of said anything, I wouldn't have picked up on it. I would have just thought that you wanted people's attention towards the top.

It looks great, whatever you want to call it.