How time flies. I can't believe that it's been over two weeks since my last weaving post. I try to divide my time so that I get at least a little of several things done each day: weaving, knitting, computer, and spinning, (though I haven't been spinning lately). Now dyeing. I find this gives me a break from one activity to the next, but keeps me busy at the same time.

I have been slowly working away at my expanded multiple tabby weave experiments, and now have something on the loom to show.

These are interesting, not only because the treadling is different from the samples I've done previously, but also because they use overshot wefting. 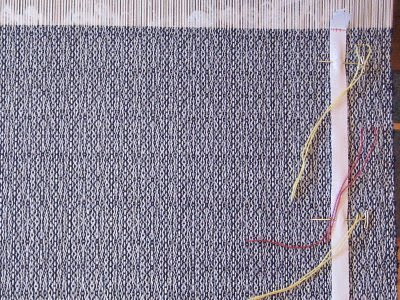 This one uses only one shuttle, the pattern and tabby wefts being the same yarn. I'm using 16/3 unmercerized cotton for the warp, and a navy blue 5/2 cotton for the weft. The treadling is block C as drawn in, with the A block used for the tabby shots.

The yellow and red thrums on the right mark the end of each treadling sequence. The sequence is 56 picks, so if I lose my place, these show me where the sequence began. Then if I need to, I can count the weft shots to figure out where I am and what's next.

The white twill tape is for measuring. I draw my own measurement marks on it and find it's the best way for me to get each piece the same length! Details on that here. 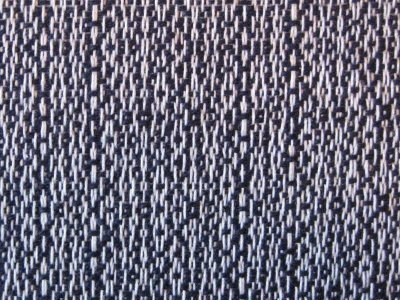 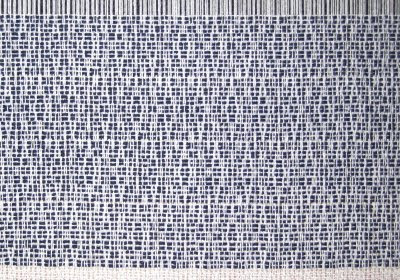 The overall pattern is vaguely visible, so I am very curious as to how this will look after wet finishing.

The biggest challenge for these so far has been keeping track of where I am in the treadling sequence. This is how I'm doing it at present: 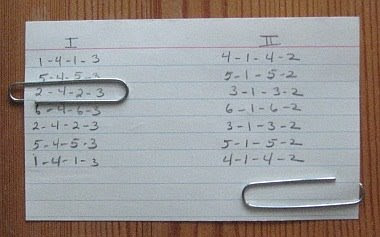 I and II alternate. I just have to move the paper clip after I complete each section in the sequence. This hasn't been too bad really. I could have made it easier if I'd re-tyed the treadles. As it is, the tabbies for part I are treadles 3 and 4. It would have been much easier if they were 5 and 6. However, treadle tie-up on a countermarche loom is a bit of challenge and I prefer to avoid it if at all possible! Hence the fancy footwork.

What I really want to try to keep track of the treadling sequence is a treadling abacus. Photo and brief explanation from Yorksett Arts & Crafts here (at the bottom of the post). When I can find some cube shaped number beads I'll go for it. Until then, I'll just treadle along as I am. :)

Both are very interesting. For doing samples,changing the tieup is probably not worth the trouble, even on a jack loom. But I do change it when I am going to weave a long piece. Easier to treadle and less chance of mistakes. I know, the CM is a bear to retie....... But you've got a great loom!

Thanks Peg. Actually these are "functional samples." I plan to make table napkins out of them for everyday family use. I agree about longer pieces. That would certainly make the footwork easier!

I love it when people find my blog entries useful!
The BeadBee has the beads with numbers.

Very useful! Thanks for the lead on the beads. :)

I think Robin Spady said the beads were available at Michaels. I will have to check my notes to see if I have that written down.

Thanks Patrick, that would be very useful. Laritza used the round ones, but I'd really like to find some numbered cubes. I've checked my local Hobby Lobby and Walmart, but no joy. Any leads would be appreciated.