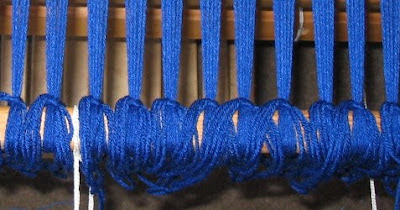 I have long been a proponent of lashing the warp onto the front apron rod. This is not how I learned to warp a loom, but was a much welcome solution to an early problem I had: getting an even tension. For a reason I didn't realize at the time (but came to understand later), I really struggled evening out the tension when I tied on a warp. One part or another of it was always loose, no matter how many times I tightened up those knots. When I learned how to lash a warp rather than tying it, I was won over after the first try. I used it for 7 years, until recently.

Lashing on (also called lacing on) has some of good advantages: it doesn't use as much warp as tying does and so is good for scant, expensive, or handspun warp; it's good for slippery warps; or for warps that are so dense as to crowd the apron rod when tied on.

The disadvantage is that it requires a stout, smooth cord about ten times the width of the warp for lacing. It's also a nuisance to correct threading errors, but these are a nuisance anyway, in my opinion.

When I started my series of afghans, I discovered that I didn't have a lashing cord ten times the 44 inch width of the warp. All of my lashing cords were considerably shorter. I suppose I could have waited until I could get more cord, but being the impatient sort who was really chomping at the bit to start weaving on my new loom, I decided to tie the warp on.

To my delight it worked quite well. The warp behaved, the tension behaved, and the knots behaved. As I've woven my way through several afghans, I've tied each warp onto the front apron rod.

At first I thought that my success was due to the fact that I have quite a bit more weaving experience under my belt than the last time I tried tying. But as I reflected, I realized that a lot of my problem back then had been due to the type of yarn I was weaving with: rayon. Rayon is slippery! But I had gotten a bunch of rayon yarn really cheap (as in a dollar a cone) so I used it. Lashing on improved my tension problems, and when I switched to cotton yarns I lashed them on too.

The acrylic yarns I've been using for the afghans tie on nicely. The yarn grips well, so that I only need a half knot as I'm tensioning the warp. (On the other hand, the warp for the wool afghan was definitely slipperier, so that I needed a surgeon's knot.)

It's funny how things can come full circle and all for the better. I have also been hand tensioning these afghan warps, because I don't have enough half gallon milk jugs to use as weights. So even with techniques I thought I had abandoned, my warp tension has been good. It is rewarding to know that I can get the same results either way. It's a real confidence booster. Plus, now I'll always have a good answer for my DH when he asks, "Who's winning, you or the warp?"

P.S. to this post's comments. Susan's blog can be found at Centerweave.
Posted by Leigh at 12:08 AM

That is great that you've seen real growth and development in your techniques as a weaver. If the craft isn't dynamic, it isn't worth one's time, I think. And freeing yourself up to have TWO good warping techniques in your arsenal you can rely on instead of just one is really beneficial.

And the new website layout? Looking good if I do say so myself! In Safari and Firefox both, it is functioning well with no loading issues I can see!

I've only lashed onto the apron bar. I have pretty good luck with tension.
Leigh, you inspired me with your blog look - I've changed mine too!

If I had had enough lashing cord I never would have tried to tie it. I'm glad though that I didn't because I've learned something good to know. Even so, I'll probably go back to lashing again after I put a whole new warp on my loom.

What an interesting post! I guess I shall continue lashing on as I use slippery yarns. Even the 20/2 pearl cotton doesn't "grab." I must confess, though, I do wonder how much your new loom plays into your improved warping?
Oh yes, and I do like your new look. However, I can't raise Susan's blog as her profile is not listed as public. Help?

Peg and everyone else, Susan's blog is Centerweave. Just click on the name.

I'm too tired tonight and didn't get though the link to Centerweave. Could you include in a regular post? So much to consider. I hope I remember to review these posts before I warp again. Too much family foment for the moment but I look forward to the peace of dressing a loom in the weeks to come.

My profile should be visible now! Thanks for everyone's interest! And thank you, Leigh.

Thanks for the reminder. I haven't used the lashing on method for years. I could bopp my forehead with the palm of my hand like the V-8 commericals for not thinking of it sooner too. Now to hunt out slippery cord.
Nice shade of blue for this afghan.

I guess I've always lashed to the apron. I never knew there was another way. Might have to experiment once I get my loom set up. Nine years is a long down time. :( I LOVE your pillow in a previous post....Nice colors and design.