While it's great having the original manual for my new sewing machine, I've found that it doesn't answer all my questions. To clean and oil the underside of the machine I need to tilt the head back but couldn't figure out how! The first step was to remove the treadle belt. Mine is old and loose so that was easy to do. But I couldn't tilt back the head. It was fastened and I couldn't figure out how to get it to release. I suspected this knob had something to do with it. 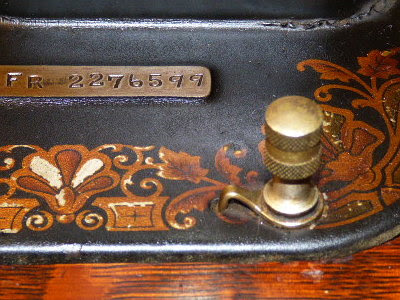 It looked like it needed to be unscrewed, but which way? It was too tight to turn either clockwise or counterclockwise so I was stumped. I searched the internet for an answer and found others asking the same question, but nowhere could I find the answer. Finally, I found a picture of the same machine without the cabinet. When I saw the underside of the knob I knew what to do. 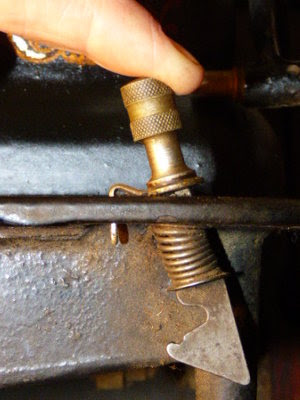 Tilting it to the left released the latch so I could lift the head.

I don't suppose that's terribly interesting to anybody, but after puzzling over it for so long it felt like an accomplishment to figure it out! So I'm posting this just in case someone else is having the same problem. 😌


How to Tilt Back the Head of a White FR Treadle Machine
© January 2019 by Leigh at Leigh's Fiber Journal
Posted by Leigh at 5:36 AM

Omigosh, who would have guessed the knob would be tilted rather than screwed one way or the other?! My husband just got an old (electric), heavy-duty sewing machine he wants to use for repairing camping equipment like canvases. It was in a table-top case but we wanted to tilt the head up and away from the base it was mounted on. We just couldn't find the "release" button or knob or whatever for a while. Finally did (it was just a swing-type lever) and were very pleased to find the underneath area was clean. as. a. whistle! The machine had been stored in a perfect environment and apparently not used a lot.

Mama Pea, well, I certainly wasn't guessing correctly! Good for Papa Pea for figuring his out! So nice to find these old machines so well taken care of. I don't think many modern machines are this heavy duty nor will last as long.