I haven't had a spinning update in awhile because there really isn't anything new to report. I'm still working on my Pol-paca blend for weaving. Last update on that here. I have about five or six more skeins, but basically it's just more of the same.

Cyndy made a comment on that last spinning post however, that got me to thinking. She said,

I am making my own head spin wondering how you tabulate how many yards of yarn to spin for the number of yards in the fabric...

In turn, I'm going to tell you a story, and then show you how I measure and calculate handspun for projects. I will do that over a couple of posts, so let's just say that this one is the introduction. 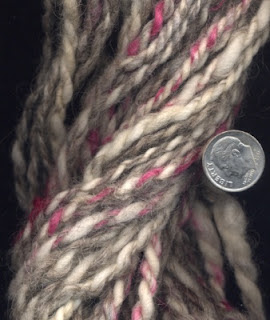 I had an experience when I first started spinning that has left me a tad paranoid ever since. I created my first 2-ply handspun (pictured on left) from two pounds of Brown Sheep mill end roving (aka "beast" roving.) My yarn was quite bulky and I was very pleased with it. Being the project person that I am, I decided I wanted to make a sweater with it. I chose the "Stone Circles" pattern from Sylvia Cosh's Crochet Sweater Book, and spent many happy hours working on it.

Imagine my dismay when I ran out of yarn before I finished the sweater. But, being a rather determined sort, I recalculated and tried some modifications. No luck. Next I tried a different pattern. Same results so I tried again.

Now, my husband will be the first one to tell you that if anyone can fit ten pounds of potatoes into a five pound bag, I can. Even so, I could not make that yarn stretch enough to get a sweater out of it. 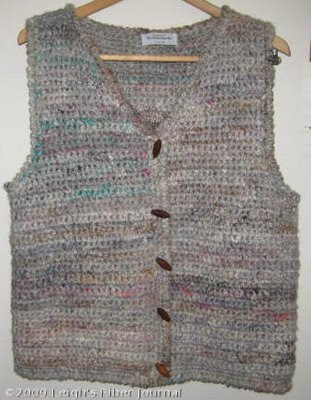 In the end, I chose a crochet vest pattern; one I found on a Lion Brand skein wrapper from a project long before I learned to spin. I added a reverse stitch crochet for the edging, and omitted the pockets. I've been happy with that vest ever since, and don't regret that it didn't become a sweater. I love to wear it over a denim jacket when the weather turns extra chilly.

All's well that ends well, but I learned something valuable from that experience: that I need to calculate project needs before I ever get started. I admit that I'm still always a little nervous about this. With careful measuring and calculating, I usually end up with yarn leftover.

So how much pol-paca yarn will I need to weave a coat? I'll start figuring that out next time.

Related Post:
Calculating Handspun For Weaving
Posted by Leigh at 9:13 AM

I'm glad that you ended up with something that you love!

huh, I manage reasonably well with spinning for knitting by now - but weaving is another thing altogether:(( when I did the 2nd weaving, my silk scarf, I guessed that I had plenty. after putting on the warp I figured I didn't have enough - only to end up with nearly a ball of silk left, because I chose to narrow the warp down a bit:)) and a narrow scarf, too... well, I think it takes practise too and while I focus on getting better with the weaving, I don't want to calculate too much for amounts.... you have a lot of yarn to spin though, for a long and wide coat like that! happy spinning!

I love hearing all about how your projects come about. I haven't made anything out of my hand spun yet, your vest looks great!

Such fun to see this crochet vest and the lessons learned. I always spin much more then I think I need and so far, so good.

I know I've had the same sort of problem only with a shawl I was weaving. Your yarn is perfect for the lovely crocheted vest.

I am horrible at calculations. They make me regret not paying attention during my math classes. I'm paying now. Reminds me of the old Texaco ads - pay me now or pay me later. I'm paying later.

Oh- I'm so glad you are going to teach about this...I am an old dog, but need to learn a few new tricks.

I'm pretty good at estimating (ha! about 50% of the time)...and I've got that spinners attitude (oh I'll just make more yarn) problem.
Not to mention I'm a process person.

It is time to change all that and learn how to do something if I really want to.

I love that book of Sylvia Cosh's and stone circles is always one I had planned on doing -but never got round to it-however I did do her celtic jacket and still wear it.However I just spun and crocheted till it was finished.I never thought to measure my yarn.I see I have a lot to learn!