If you read Thrums, then you've probably seen Susan's blog posts about some of the beautiful and inspiring things she has in her home and studio. The interior decorator in me is always interested in things like this, and in reading them I was reminded of something I had packed away.

When we moved back to the Carolinas from Florida, a lot of stuff stayed in boxes. The idea was that apartment dwelling would be temporary, so why bother to unpack everything. That has turned out to be longer than we expected, so a number of things I love remain out of sight. After moving everything out of storage, it only made sense to go through boxes and repack them as needed. Inside one of those boxes I found these... 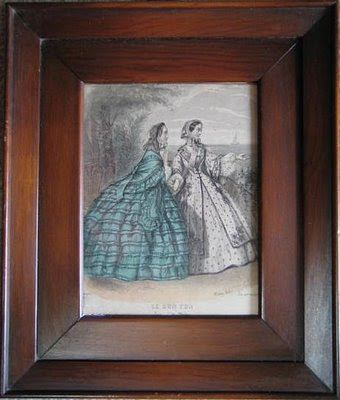 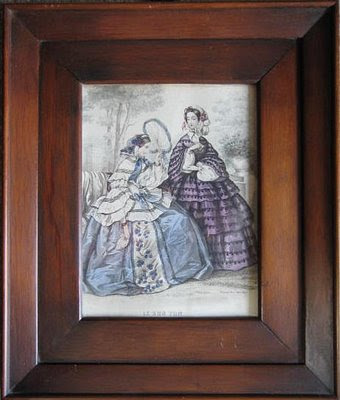 These are framed plates from Godey's Lady's Book, given to me by the same grandmother who gave me the coverlet. Godey's Lady's Book was a popular publication in the 19th century, so obviously these were saved by my great-grandmother. I'm not entirely certain which issue these came from as there is no date on them. The caption reads Le Bon Ton. There is a signature on one, Heloise Leloin. I assume this is the artist.

Eventually they will find their way onto my walls, but in the meantime, they are being repacked, with the hope that they won't remain that way for too terribly much longer.

Email ThisBlogThis!Share to TwitterShare to FacebookShare to Pinterest
Labels: sewing

What a wonderful find! I know what you mean about "temporary" storing of stuff. A lot of my things have been stored in the same way for about 12 years. I hate the "T" word.

Beautiful treasures! Hope you can take them out for display permanently very soon.

Those are lovely! I hope you can have them on the wall again soon. I had all of my stuff in storage when I moved back to my parents' house after college. When FH and I got our first house it was like Christmas having all my things back.

Those are beautiful! I have some of Dover's "Godey's" books. I'm pretty sure I remember seeing at least the top one in one, but I must have misplaced the book it's in because I can't find it in the books I have right now. They are beautiful!

Its just like Christmas when you unpack stuff you haven't seen for along time.
I love the plates!

the pictures are nice - but can you imagine how wearing those clothes must have felt? I always pity the poor women who had to wear corsets as tight - and gigantic skirts to boot! how lucky we are to have more freedom nowadays!

The pictures are wonderful; too bad you have to pack them away again. I rather like the gowns too, especially the right-hand one in the top picture. I think I had a waist that small when I was 17 or so.

I'm pleased you all enjoyed seeing these.

Jewel, you're right. It is a bit like Christmas!

Alison, I didn't realize Dover had such a book. But actually I'm not surprised. They do a great job of reprints like that.

Bettina, I think about that sometimes. Like Wool Enough I think about a long lost waist line and then remember that they accomplished a lot of it with corsets!