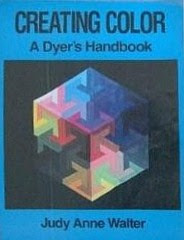 If you've been reading the comments to my recent series of dyeing posts, then you've seen this book recommended by several people. If you have the book, then you know why. If you don't have it, but are at all interested in Procion MX dyes, then this book is a "must have!"

Creating Color: A Dyer's Handbook by Judy Anne Walters, deals exclusively with Procion MX dyes. Walters herself is a quilter who dyes her own fabrics. She has written a well organized book, loaded with useful instructions, charts, and projects.

Her "Introduction: Where to Begin" (Chapter 1) and "Quickstart" (Chapter 2) help a new dyer get up and running. In subsequent chapters, she goes on to explain exactly what Procion MX fiber-reactive dyes are, safety procedures, how to set up a dyeing area, equipment, ingredients, characteristics of the individual dyes, step by step "how to," and troubleshooting. She also explains her basic concentrate system, record keeping, basic color theory, and color mixing.

The charts are fantastic. There are a couple for dyebath ingredients, a sample recipe card, a dye weight chart, a dye class chart, and washing machine dyeing chart. The color comparison chart, lists the various names and codes for individual colors as used by several dye companies. I found this was helpful when looking for sepcific MX codes at ProChem (which doesn't use the MX code numbers).

The Dye Class Charts are what prompted me to buy the book in the first place. There are six classes of dyes, based upon the relative density of the dye powder for various colors. Class I is the densest, with 18 grams of dye powder averaging an equivalent of four teaspoons. Class VI is the least dense, so that it takes an average of nine teaspoons to weigh 18 grams of dye powder.

Put another way, it takes one teaspoon of a Class I dye to create a deep hue value on one yard of fabric. With a Class VI dye, it would take 2 and 1/4 teaspoons to produce the same hue value on the same amount of fabric.

This explains why my first samples were purple instead of blue. The fuchsia is much denser, and therefore more potent than the turquoise.

The book also contains 20 projects, especially color wheel and color gradation projects. I understand that Judy Walter does workshops too, and I would jump at an opportunity to take one.

All in all, this is a really useful book. I like the way it is laid out. I like the charts and tables; everything is easy to find. A real boon to Procion MX dyers.
Posted by Leigh at 12:55 AM

This was the book that taught me how to dye! It is very dog-eared. I used it for a couple of years until I finally took a big gulp and jumped into the metric system, I jump I have always been glad I made. You don't think, of course, that I might be trying to encourage you....... (grin!)

Peg, actually I switched to the metric system when I first started my hex code dyeing experiments *grin*. I realized that kitchen measurements wouldn't cut it. I just substitute the metric for her measurements, with good results.

Miss Metric Challenged here! I admire you and Peg, both, for doing the conversions.

Another book for my "wants" list, thanks for the review. Sad that it's out of print, and doesn't seem to have been sold in the UK, I'm buying more and more books from the US nowadays ;) How did we live before the internet?

We were using ProChem dyes last week and here's my question. Do you mix up bottles of stock solution and then blend your colors together, and if so, how many solutions do you have to work with at any one time? I think we were using about ten colors in solution, recommendations that we got from Sara Lamb workshop.