Weaving on the undulating shadow weave has been progressing nicely. It has a fairly long treadling sequence which has the potential to be confusing. But actually it's been easy to catch on to, and fun to weave. The colors I'm using are quite dark, but I hopefully the subtle pattern can be seen in this photo: 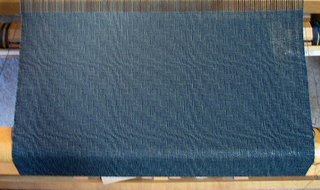 I'm especially happy that the warp tension is even and the fell is straight. I have struggled for years with tension problems, but it hasn't been until I started experimenting with warping back-to-front that I actually made progress in conquering them.

My first plan was to use this fabric for front panels for a jacket. However the more I weave, the more I see a table runner appearing before my eyes. I didn't hemstitch it at the beginning, but perhaps I can do this before the whole thing is cut completely off the loom(?)

My other news is that I have had a slight set back in accumulating more half gallon milk jugs to fill with water for warping weights. Since this warp, my goal has been to have more weights so that I can have smaller bouts as I beam the warp. With the help of my almost-no-longer-a-teenage son who still likes milk on his cereal, I've been able to save a few more. Then I saw this: 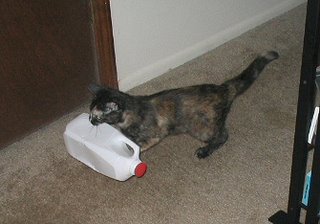 Yes, she's trotting down the hall with it in her mouth. Here's a close-up of what she did to it:

I can't fathom what is so attractive about it unless her super kitty smeller detected the faint odor of milk, which certainly must be rather sour by now. To me it just smells like plastic. Or maybe 5 months is an age when kittens teethe. I don't know. I just know that I'll have to find a safer place for the next ones.

You can hem stitch the front of it once it's off the loom. It's a bit more challenging than doing it on the loom under tension but I have done it that way. It's weaving up beautifully by the way and will make a stunning runner.

Lovely weaving! It'll be a beautiful runner...Like Sue has said, I've hemmed the front end of a project after weaving. Not quite as good tension, but still, better than doing it off the loom. Perhaps you could weight it off the back with some milk jugs....um, well....tooth-free ones....!

Thank you Sue and Cheryl. I probably would have tried the hemstitching after the fact anyway, but it's a relief to know that it has been done successfully by others.

I don't know about cats teething - but I *do* know that they learn to carry things at about that age... Hopefully, she will grow out of it.
My kittens have carried socks, pens, empty youghurt cans... one kitten, one speciality.
Good luck!

I got to your site through Rascal and Catzee, and I am really enjoying it! I don't have anyone who carries milk cartons, but my (5 year old)"kitten" still totes balls of yarn. I got her when she was 4 weeks old(!), and we lived in my studio until she was old enough to climb stairs and generally be out in public. Therefore, most of her baby toys were of the yarnly persuasion, and it's an addiction she's never grown out of.

I am a knitter, mostly, and I dabble in weaving, crochet, sewing, cross stitch and needlepoint. If you don't mind, I'm going to try the Miniature Leaf and see where I get with it.

Your Shadow Weave is just beautiful!
Rascal and Catzee are a lot of fun, too!

The Undulating Shadow is just beautiful, so much so that I was *almost* tempted with learning to weave. Almost.

As for the kitty, mine carries anything she determines is a toy. At 3, she has never grown out of it. Hope yours isn't too destructive!

Ha, ha, well done Catzee. She is just too cute.

Leigh, I can just see enough of the pattern on the left side of the photo to see that it is beautiful! I love undulating weaves of any kind. But because I weave primarily with slippery silk, undulating weaves are not the wisest choice of structure. Is kitty still alive..............?

LOL Yes, Peg, she's still alive. I agree with the others that she was so cute that I had to grab for the camera.