The first (on the left) is another scarf actually. The pattern is the four block 2 by 2 shadow weave draft from Madelyn van der Hoogt’s “Color-and-Weave Basics” article in the March/April ‘05 issue of Handwoven. I did adjust the number of ends per block according to my desired project width. I followed the treadling order for the scarf (as drawn in), but can imagine a lot of treadling fun with it.

The yarn is the same Yarn Bee Icelandic Jewels that I used for the green and orange scarf. Red and black was the other color combination that I couldn't resist buying. I think what attracted me to these yarns was the ribbon plied into it: 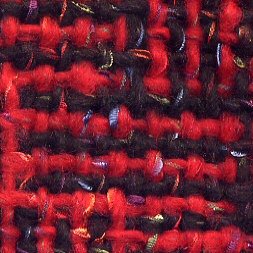 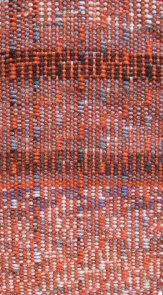 My other experiment with this draft was to tie on some sock yarn leftovers. I used orange (obviously) and one of those Fair Isle space dyed sock yarns.

So this is the same pattern as the scarf but, as you can see, the effect is very different. I found the results intriguing, not only for the ikat-like pattern in the lower sample, but also because of the textured look added by the overshots. More design possibilities!


A couple of close-ups which I scanned in are below. 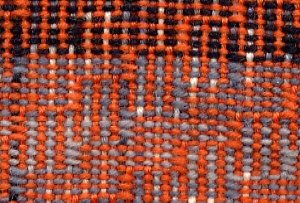 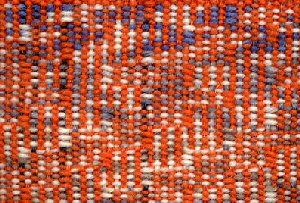 Hey Leigh,
Thanks for looking at my blog. Really like the weaving. I decided not to do weaving, but really apprecite the time and effort that it takes to get something this lovely.

LOVE the first sample/scarf! Aren't you glad that you continued experimenting with shadow weave! I know I am.

I love the visual depth of the red and black scarf. Did you give a grist for the yarns and a sett?

Your productivity amazes me!

At first glance I thought your sock yarn experiment had resulted in a gauze like fabric.

I found your blog looking around...
I love your pics of the silk, one of my favorite fibers. The silk rods cleaned up and carded are beautiful. Thanks for sharing.

I just love all your messing around! Black is a great combining color with all sorts of bright colors. It really makes them appear more jewel-like.

LOVED looking at these pictures -- I am a new weaver starting to experiment. It just ocurred to me that I could use sock yarn (of which I have tons :>) in these experiments, so it was great seeing your samples.