When I started this blog over two years ago, I promised myself that I would be true to the title - fiber stuff only. I said that I would never blog off topic. Like other folks I have lots of interests, but this blog is a journal of my fiber and textile projects and explorations.

I admit that I haven't held to this rule strictly. The one that stands out in my mind is a computer rant I went on about a year and a half ago. Mostly, I just enjoy some of my other interests through other blogs. Gardening is one of those things. I commented to Christine on one of her garden posts, that if I had a garden other than my little balcony garden, then I'd have a garden blog. She responded that I should post about my balcony garden anyway. So in a rare burst of random blogging spontaneity, here it is.

I have always been an avid gardener and whenever possible, I've had a large vegetable garden. For two and a half years now, we've been in a "temporary" living situation of a small second story apartment. Our balcony overlooks a parking lot which isn't very scenic. So our first summer here, I decided to attempt an Old World style balcony flower garden. It was both prettier to look at and gave us a sense of privacy, as it somewhat shields the view into the sliding glass doors.

This year however, I decided to branch out a bit. 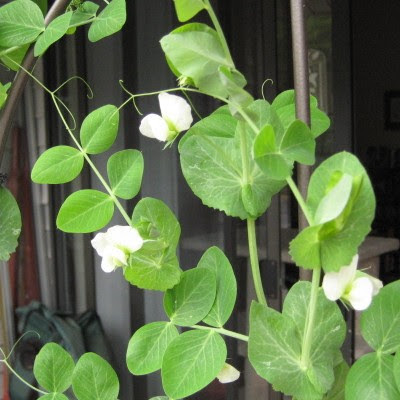 For the past two summers I have grown morning glories on trellises. This year, when I found some 10¢ packets of pea seeds, I bought them on a whim and planted them instead. I figured that the flowers at least would be pretty. 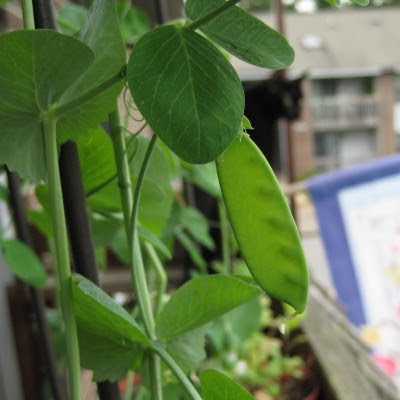 But the pods with their promise of fresh sweet peas is pretty too! 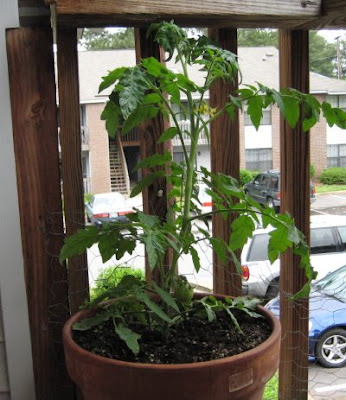 I also finally found a bush tomato plant. I've looked for one of these every year, but this is the first time I've found one small enough to plant in a pot. 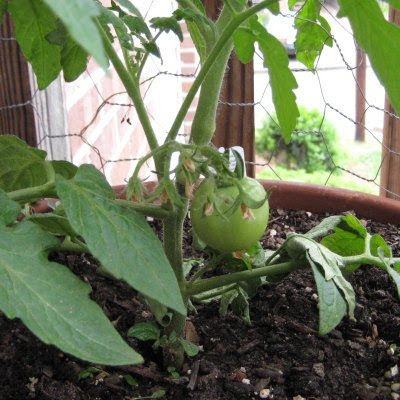 So far we have one tomato and several blossoms. My balcony only gets late afternoon sun, and tomatoes like sun. So I'm not sure how many I'll end up with, but I figured it was worth a try anyway. 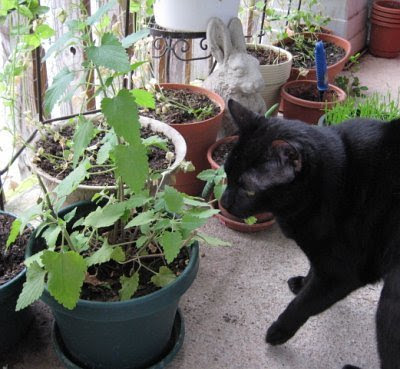 Having cats, I also have the obligatory catnip plant. I cut off the stems and leaves right before it blooms, as this is when it's at it's most potent. My kitties have dried organic catnip all year long. This is mostly appreciated by Rascal. 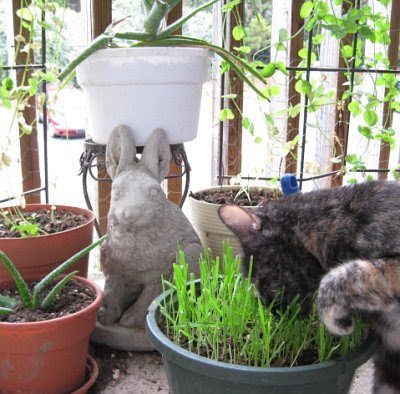 You can see my aloe vera plants here, which live on the balcony during the summer. Also, I try to keep a supply of cat grass growing. This is another kitty favorite, as Catzee demonstrates. Catzee, by the way, is not usually allowed out onto the balcony by herself because she jumps off. If you're interested in some of her adventures (also non-fiber), click here.

So there you have it. A rare post about something other than fiber. Now. Back to business.
Posted by Leigh at 12:02 AM

I like the view into that part of your world, Leigh. You have a lovely garden. I grow most of my herbs and grape tomatoes in pots. They're much more accessible. I bet your rabbit doesn't eat as much as my visitors do!

I'm so glad you took a detour and posted about your patio garden! It looks fabulous!

And I smile when I think about how many fiber people also like to garden...

Thanks for the pictures especially Rascals and those great looking peas. I think we all enjoy little tid bits of our fellow blogers personal lives. Nice to take a break once in awhile.

Must say I don't think I'll be blogging about weaving for a bit myself... just found out my cat Oscar (15 yrs) has heart disease. We're going to sit out in the garden together this p.m., I'll take my knitting and he can laze around. Being around growing plants is good for people & cats.

By the way, I think tomatoes are alright as long as they get light and heat - doesn't need to be direct sun - the warmer the happier!

I think the fiber arts and gardening have a lot in common, so good call on the side-track post! :-)

What a wonderful balcony garden, Leigh! I remember your computer rant blog -- *grin* and you have done a stellar job of staying true to your weaving on this blog.

I made a vow to do the same thing since I re-opened my blog. So often when I go out to look for weaving blogs, I run into everything but under the title of weaving. It's so refreshing when I find bloggers whose primary focus is weaving (even though I do everything fiber, and enjoy other types of fiber blogs), since there are so few of us out there.

Am envious of your tomatoes!!! YUM!

Wow! You've got a tomato already! And peas! Your balcony garden is so lovely and it's so lush and green! I totally believe Amby is right, gardening and fiber arts do go hand-in-hand. Thanks for the great side-post.

Okay, I loved this post and think you need to go back to your mission statement and stretch the edges. Us fiber folk have stretched selvedges anyway - give us patio gardens, cats - you bet, lotza cats! - and books. Oops, I just fell off my very slippery soap box which means I probably use it too much - dang soap box~

I love looking at your weaving and now enjoy your blog even more! I am a gardener too and I posted my beginning garden on my blog. I just love growing things in pots and now we have dug up some of our back yard to satify my need to play in the dirt. Nice to see others love to do the same. I love the catnip for the kitties.

I rather like it when I get to see other sides of the blogger. Of course, if I were even half the fiber artist you are, then I wouldn't have to resort to rambling posts about zombies or my cat...

This was a fun tour of the garden! I love the kitty helpers!

I just got my seeds in the garden this weekend...our growing season is so late here...I still worry that I might have put them in too soon! But I have some plastic to cover them with if we're expecting another freeze. I sure hope not.

Love your balcony garden...I had one when we lived on the second floor, but it was just flowers. I think I should have tried tomatoes as I loved fried green tomatoes!!! yum!

It's good to know you have a happy garden life, even if the space is small - the spirit is large :-) Good job! T.

We just picked up a few tomato plants this weekend. It will be our first attempt, as we have a wooded lot, and as you said, tomatoes like sun. This will be Paul's job, as I, in no way shape or form, have a green thumb.

Love the view from your place - thanks for taking a break to share.